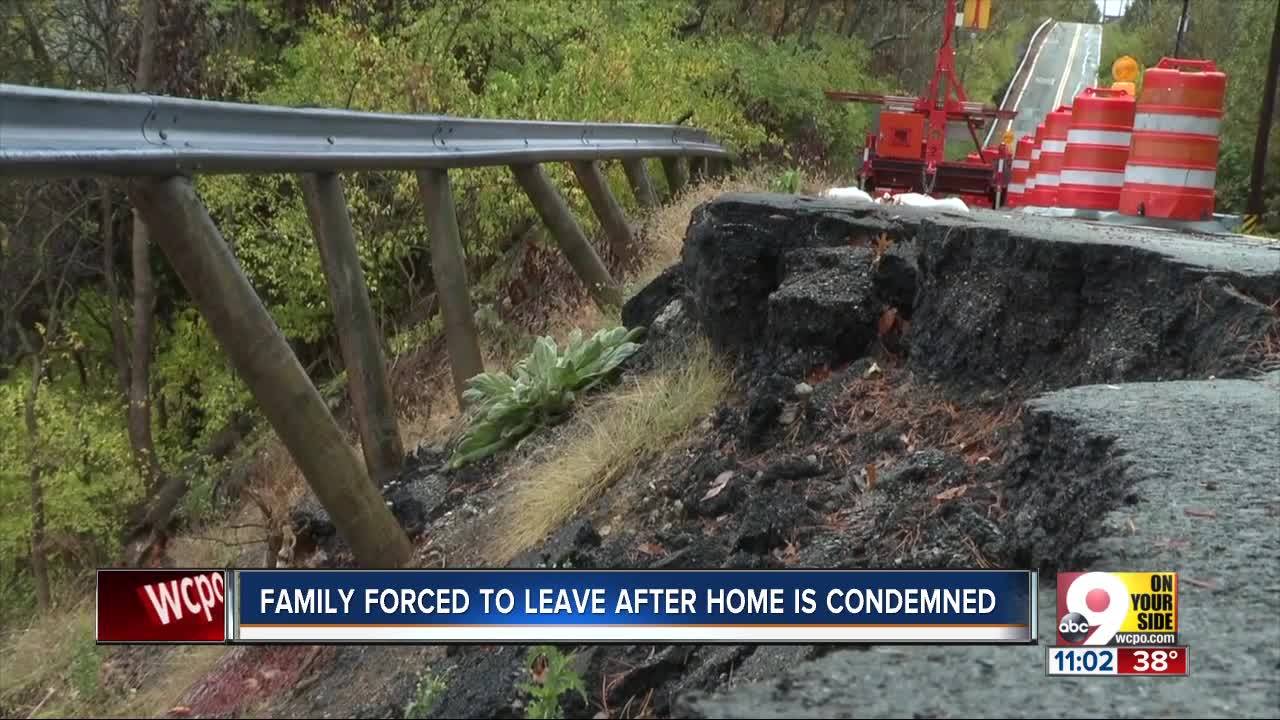 Steve Redding has 10 days to leave his home. Once he’s out, he’ll have to pay to tear it down and keep paying to settle the $69,000 he still owes on its mortgage.

MIAMI TOWNSHIP, Ohio — Steve Redding has 10 days to leave his home. Once he’s out, he’ll have to pay to tear it down and keep paying to settle the $69,000 he still owes on its mortgage.

None of it was up to him.

“We don’t have a clue what we’re going to do,” he said Friday night. “We don't know if they're just going to tell us, ‘You can't go back in the house.’”

Redding lives underneath the crumbling and aptly named Cliff Road, which years of landslides had reduced to one lane by the time Hamilton County sent notice his home had been condemned.

The closed outer lane of Cliff drops off into a steep hillside, and the house sits at the bottom, tilting slightly forward on its foundation. It stood straight when Redding moved in to care for his sick father 20 years ago.

He knew then that the area was prone to landslides and considered too risky for insurance, he said, but significant shifts didn’t begin until 2018. He complained to Hamilton County and spoke to WCPO in July, both times without results.

The county’s notice arrived Oct. 9: The property was condemned, the Reddings would need to be out by Nov. 11, and they would need to demolish it once they were gone.

The county announced Thursday it had approved a $300,000 contract to expedite repairs to Cliff Road. Hamilton County Engineer Ted Hubbard said the effort will include installing concrete piers to hold up the hillside and should be finished by early February.

Redding said he will be forced to declare bankruptcy even if he borrows from his 401K.

"I understand it's got to be fixed,” he said. “There's a lot more people that live up there too and it's affecting them, but I just don't feel like it's right what they're doing to us, telling us to get out and good luck."

Mike Montgomery, a licensed engineer specializing in home inspections, said families like Redding’s have little financial recourse. Unless they can prove another person or company was responsible for the hillside’s slippage, they shoulder the cost on their own.

“If you’re not in an economic position to be able to rectify the situation, you might just be out of luck,” he said.

Redding is stunned. He isn’t sure what he’ll do.

"We will probably never be able to retire, then, at that point, because that's a lot financially to take on,” he said. "You can work every day of your life, pay your taxes and everything, and the next thing you know be homeless and it's nothing that you did wrong.”