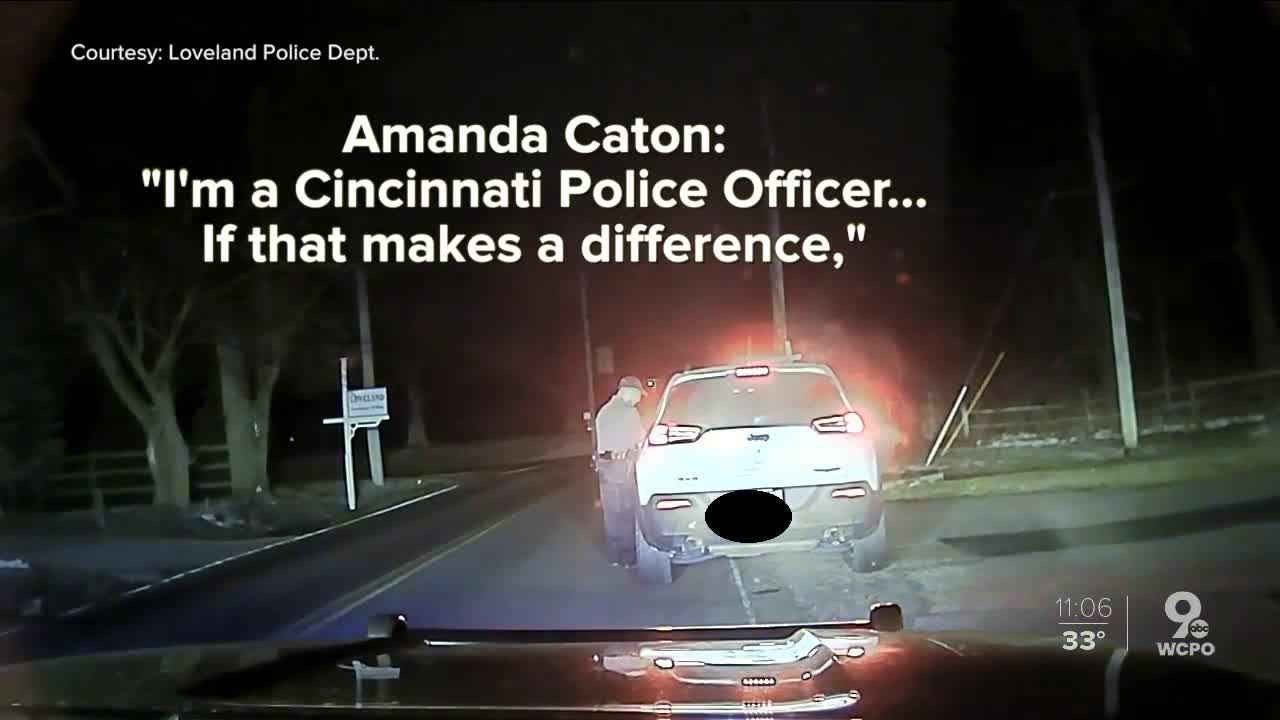 As Loveland police officers returned Cincinnati Capt. Amanda Caton home following her Sunday morning drunk-driving arrest, her husband Patrick arrived on foot. He had chosen to walk rather than accept a ride from the officers who pulled Amanda over; he had insisted Amanda, who swayed visibly while one officer administered a horizontal gaze test, refuse additional tests.

LOVELAND, Ohio — As Loveland police officers returned Cincinnati Police Capt. Amanda Caton home following her Sunday morning drunk-driving arrest, her husband, Patrick, arrived on foot. He had chosen to walk rather than accept a ride from the officers who had pulled Amanda over; he had insisted Amanda, who swayed visibly while one officer administered a horizontal gaze test, refuse additional tests.

“You heard me,” said Caton, who flashed his own badge during the arrest.

Both Catons were armed at the time.

In the video, the officer pulls the couple over after a series of traffic violations, including drifting over the yellow center line. He notes out loud the strong smell of alcohol coming from the vehicle.

Amanda Caton stumbles over her speech while telling him she is a Cincinnati police officer and admits to being armed. Patrick Caton grows increasingly confrontational, insisting he is not drunk and asking the arresting officer how long he has been in law enforcement.

“I see your badge, but I’m telling you, your speech is slurred, you reek of alcohol,” the officer tells Amanda Caton at one point. “You’ve put me in a bad spot.”

When Patrick Caton tells his wife to turn on the radio and begins to complain they are only blocks from home, the officer interrupts.

“Everything’s recorded,” he says. “I can’t just do nothing now. You guys both reek of alcohol.”

When Amanda Caton steps out of her car, she refuses a walk test, saying she is wearing high heels.

She eventually allows him to perform a horizontal gaze test with a pen and flashlight. The recording shows her noticeably rocking backward and forward during the test.

When the officer proposes additional tests, she refuses again and cites her shoes as the reason. She does not respond when he suggests she take them off.

“We live just down the street,” she replies.

Amanda Caton repeatedly encourages the officer to follow them home as an alternative to administering more sobriety tests.

He tells her he could also charge her with a felony for carrying her gun while intoxicated but will not. After reading her Miranda rights and helping her into the back of his squad car, he returns to her husband.

“Why are you pushing this issue?” Patrick Caton demands.

“Because I have to,” the officer says. “I’m not losing my job because I’m letting someone go.”

“You’re not going to lose your job,” Caton says.

“You don’t know how this works here,” the officer says. “This is how it works.”

“I do know how it works,” Caton says.

He refuses a ride home from police, who will not allow him to drive back to his house, and walks home.

According to additional police records, Amanda Caton was taken back to department headquarters and refused a blood alcohol content test. She was charged with OVI refusal and center line violation.

A later dashboard camera recording shows officers giving Caton a ride home after the charges were filed. Patrick Caton arrives at the same time they do and again becomes confrontational, accusing them of unprofessional behavior and at one point asking: “You drove all the way out there to start s*** in my front driveway?”

Dashboard camera shows the confrontation at the Catons' home:

Amanda Caton’s police powers have been suspended pending the outcome of her case.

The entire video of Caton's arrest is more than 90 minutes in length. It was not possible to review and redact the entire video before today, so WCPO has included the portion that shows the entire traffic stop and return of Mrs. Caton.