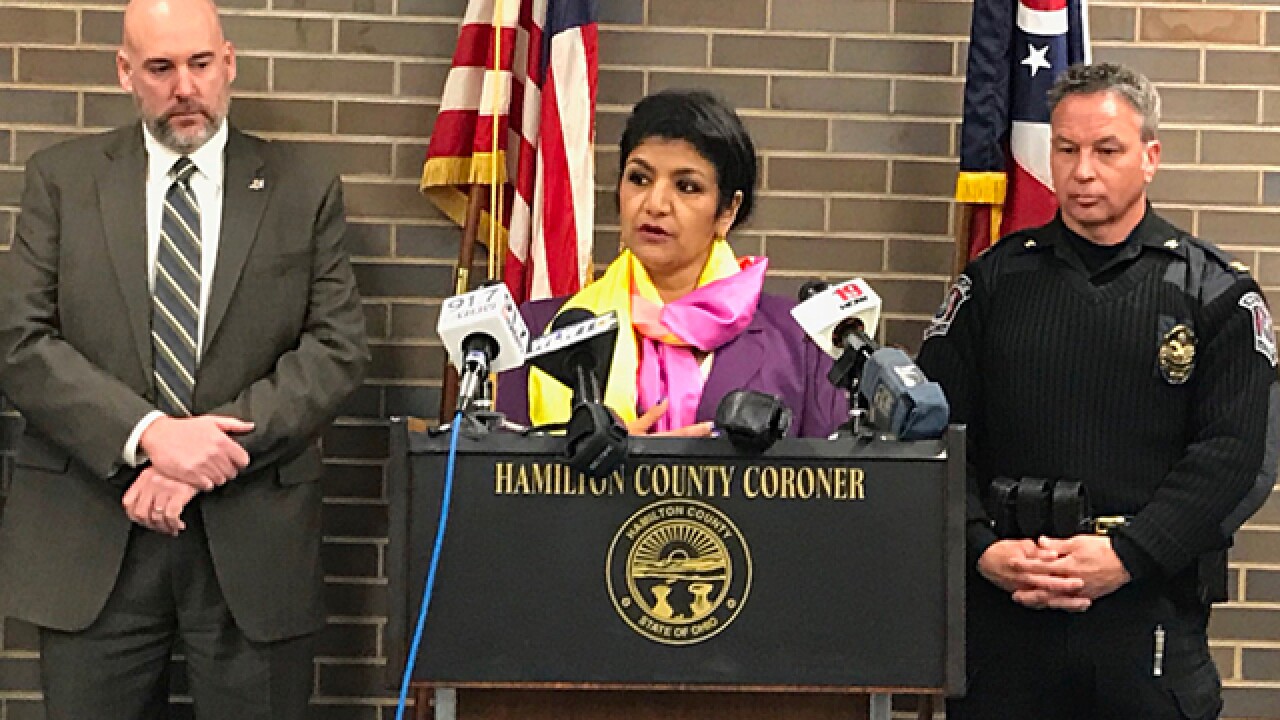 CINCINNATI -- Fatal overdoses involving opioids rose for the third straight year in 2017, and drug cocktails, including fentanyl mixed with heroin and cocaine, have become an “alarming” problem.

Here's a look at overdose stats in Hamilton County for last 3 years:

Additionally, 81 people died from an overdose involving cocaine. Not all 81 cases necessarily involved opioids, but Sammarco said she’s seeing an increase of cocaine mixed with fentanyl.

More than 30,000 items -- drugs and paraphernalia -- were turned into the office’s drug section in 2017. Sammarco said her four drug analysts each processed well over 7,000 items, which is “way higher than any other crime lab in Ohio.”

About 3,886 opiates were turned in last year, Sammarco said. While mixtures of heroin and fentanyl and have skyrocketed, plain heroin has decreased significantly.

Drugs and alcohol also impacted traffic deaths in 2017. Of the 101 people who died in traffic deaths, 31 had drugs or alcohol in their system, Sammarco said.

Sammarco said that doesn’t represent just drivers, victims may be passengers or pedestrians, but she said the numbers are concerning nonetheless.

“I wonder about the number of people that are on the roads driving impaired," Sammarco said.

Drugged driving is a growing trend; a recent report released by the Governors Highway Safety Association found that illegal drugs were present in more than 40 percent of fatally injured drivers for whom test results were available.

Tom Synan, Newtown police chief and co-chair of the Hamilton County Heroin Coalition, called the idea “rhetoric” and said it was impractical and a distraction.

“That is not useful for what we’re doing down here,” Synan said. “It’s not practical. We’re trying to find things and do things that we can make a difference here on the street.”

Sammarco said the issue lies in getting drug users out of jail and into treatment to free space for dealers.

“For us, a dealer off the streets is a few people saved, and that’s what it comes down to,” Sammarco said.

Despite hundreds of overdose deaths last year, Sammarco said the amount of people saved by Narcan has been encouraging.

“Obviously our 529 overdose deaths is a huge number, but there’s no doubt that would have been double or triple if we didn’t have Narcan out there in the hands of all our law enforcement and first responders,” Sammarco said.

In 2015, first responders administered 2,000 doses (or 4,700 milligrams) of Narcan in Hamilton County, according to the Cincinnati Fire Department. First responders used 6,500 milligrams in 2016, Sammarco said. Narcan doses for 2017 have not yet been released.

One reason overdose numbers are so high is because Hamilton County is an “unfortunate hub” for drug purchases, Synan said. Many users will drive to Hamilton County, use drugs and overdose.

Synan said viewing overdoses as numbers and statistics bother him. He said he doesn’t want the person to get lost behind figures and charts.

“Whenever you talk about a number, that is someone’s loved one who has died. We can’t forget that that person has a mother, a father, brother, sister, son, daughter.”

Everytime someone dies, Synan says it fuels him to save more lives.

“We take that to heart … it is discouraging, but it’s not hopeless,” Synan said.

For resources and more heroin-related coverage, go to wcpo.com/heroin.

Transportation and development reporter Pat LaFleur contributed to this report.