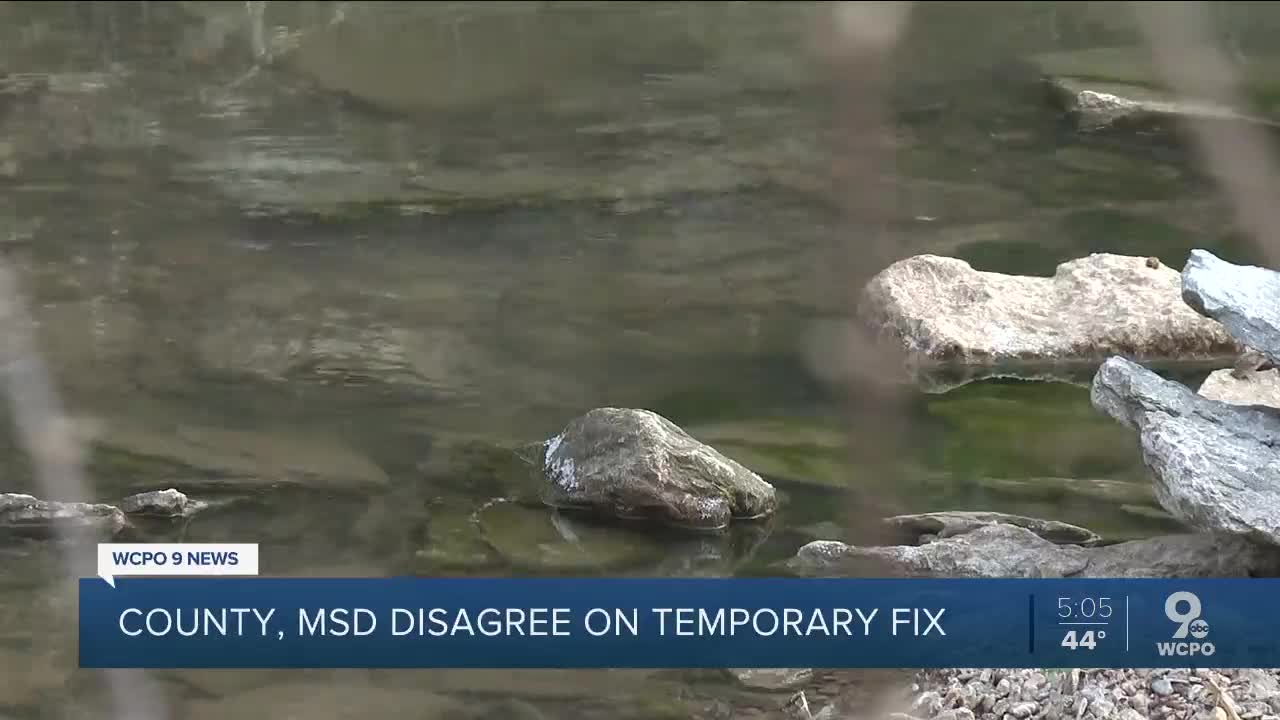 MSD said a temporary fix isn’t possible. In a letter sent Monday to City Councilman Greg Landsman, MSD said ‘a temporary measure is not appropriate,’ writing the sewer ‘has deteriorated to the point that it is structurally unsound, making meaningful repairs impossible.’ To that, Landsman said, “Well, that’s what temporary means. We’re trying to fix it.” GREEN TOWNSHIP, Ohio — After years of complaints from residents about a sewer pipe leaking into Muddy Creek and sending an offensive odor up to nearby homes, Hamilton County and the Metropolitan Sewer District are divided on putting a temporary fix in place.

An MSD pipe that runs along — and in some places, through — Muddy Creek has leaked raw sewage into the creek and sent a "nasty" smell up to homes for years, residents tell WCPO.

“You can smell the creek in the air," said Green Township resident Joe Seta. "You can drive by with your windows rolled up and (it) permeates the car."

One section of the pipe, which sends waste down to the Muddy Creek Wastewater Treatment Plant, is nearly 100 years old. MSD estimates more than 300 million gallons of raw sewage leak into the creek each year.

Read more: The river of poo and why it's not being cleaned up

On Tuesday, Hamilton County Commissioners and MSD sought a compromise on a more permanent solution.

But in a letter sent to City Councilman Greg Landsman on Monday, MSD said a temporary measure is “not appropriate,” writing the sewer “has deteriorated to the point that it is structurally unsound, making meaningful repairs impossible.”

County leaders disagree, saying the temporary repair of gaping holes in the pipe to keep it from leaking are possible with a combination of concrete, wire mesh and wire fabric to seal the openings.

“We think there just might be a misunderstanding on the types of repairs that are needed,” said Brandon Vatter with the Hamilton County team.

Commissioner Denise Driehaus plans to present a resolution Thursday directing MSD to put together a detailed plan including cost estimates and other relevant documents for a fix no later than four months from that date.

“We need to do something, in the meantime. Because even if we come up with a resolution tomorrow, it’s going to take some time to build a new pipe,” Driehaus said Tuesday.