What if your backyard was filled with poo, but no one agreed on how to clean it up? 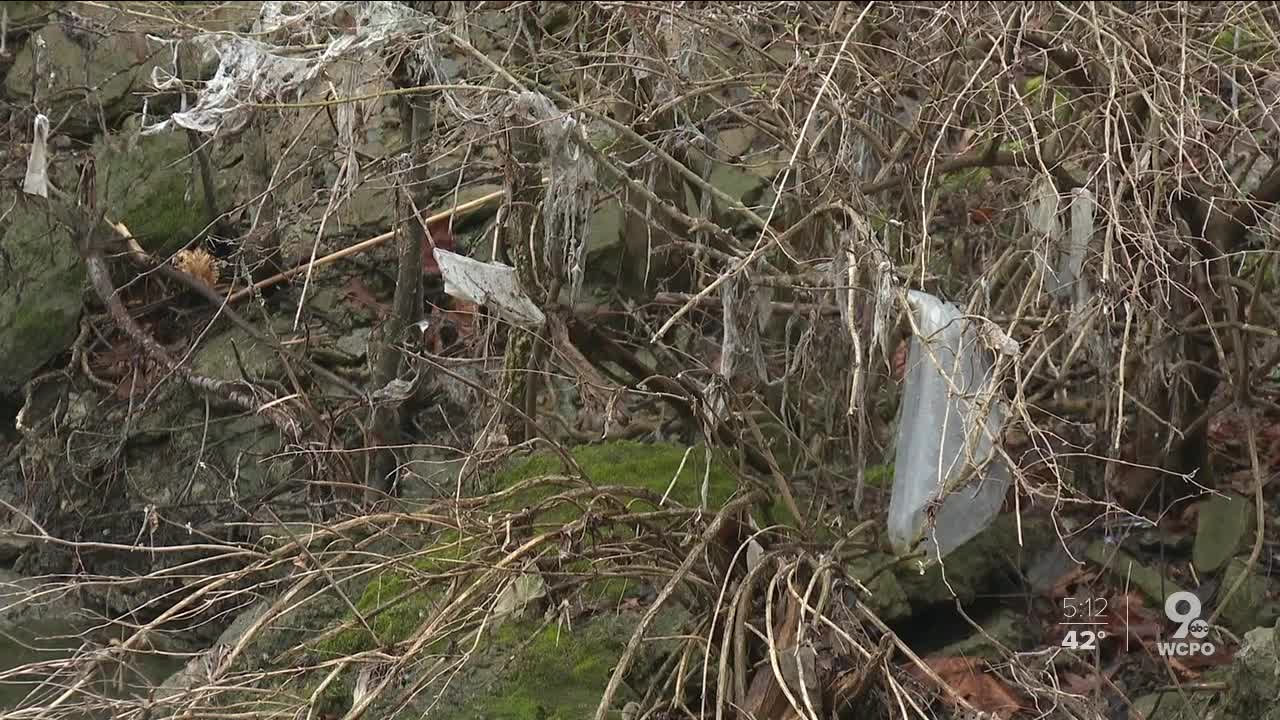 GREEN TOWNSHIP, Ohio — On a quiet morning along Muddy Creek Road, the water in Muddy Creek can be heard moving downstream.

But instead of being known for that sound, it’s become known for something else: its smell.

Seta has lived along the creek for about 30 years. He said the smell hasn’t always been an issue, but over the last 10 years it has become a problem.

“You can smell the creek in the air," he said. "You can drive by with your windows rolled up and (it) permeates the car."

And it’s not just the smell. It’s the sight, too.

“Toilet paper is pretty easy to get into the stream," Seta said. "Sanitary napkins, that type of thing have been seen floating in it."

Running alongside -- and in some portions inside -- Muddy Creek is a Metropolitan Sewer District sewer pipe. It takes wastewater down to the Muddy Creek Wastewater Treatment Plant. However, a portion of the pipe in Green Township is nearly 100 years old. It’s cracked and broken. Sewage overflows out of it.

In fact, MSD estimates more than 300 million gallons of raw sewage leak into the creek each year.

This is not new news.

“It is old, it is cracking, it is broken. And it is exposed in the Muddy Creek itself,” said Diana Christy, the director of MSD, during a city briefing last February. “This is a public health threat. It has been known. This is why we are under a consent decree.”

A fix for the pipe, which is called the Upper Muddy Creek Interceptor, is listed as a “bridge project” under Hamilton County and the City of Cincinnati’s consent decree, which is a federal mandate of projects to keep the area in compliance with the Clean Water Act.

The project was supposed to be complete by Dec. 31, 2019. Because that hasn’t happened, MSD estimates that it could be fined $2.7 million by the Environmental Protection Agency. That number increases with every day the project is not complete.

According to the consent decree, fines start at $1,500 per day for the first 30 days the deadline isn’t met. That increases to $3,000 per day for the next 30 to 60 days. And then $5,000 a day beyond that. The $2.7 million estimate is based off of how long it would take the project to be complete, if work started today. At this point, the EPA has not imposed that fine, but it could. And MSD said rate payers could absorb that cost.

“MSD’s operations are funded through customer sewer bills," an agency spokeswoman said in a statement. "If a financial penalty is assessed, MSD will have to defer other critical sewer projects in the community.”

When asked about the fines, County Commissioner Denise Driehaus said “you’d have to ask MSD why they haven’t moved forward on that.”

The reason the project hasn’t been completed, or for that matter, started, is because of the underlying issues of how MSD is managed. Hamilton County owns the utility. However, the city of Cincinnati manages and staffs it. The two agencies do not agree on a path forward.

Meanwhile Green Township, where the ailing portion of the pipe actually sits, is stuck in the middle.

“I was under the impression this was to be fixed years ago,” said Green Township Administrator Frank A. Birkenhauer. “And in the meantime we are receiving the complaints regarding the smell and toilet paper in our trees after heavy rainfalls. In addition, beyond the smell, residents that live adjacent could be exposed to raw sewage flowing through their backyards.”

According to reports that MSD wrote, a 36-inch pipe is needed to replace the damaged pipe. That is larger than the 30-inch pipe which is currently being used.

The agency also said the pipe needs to be removed from the creek and run alongside it for safety reasons. Under this plan, MSD said more overflows could occur downstream, closer to the treatment plant. However, it said it has plans to mitigate those additional overflows. It maintains moving the overflows downstream is a better option because sewage will contaminate a shorter portion of the creek. It also maintains no matter what size pipe is used, new overflows will occur.

However, the county argues a 30-inch pipe should be used, not a 36-inch pipe.

“We cannot approve something where we knowingly are increasing overflows down in another community," Driehaus said. "It doesn’t make any sense and we can’t approve of that."

The commissioner said a resolution was passed in February 2019 directing MSD to do the project under the county’s parameters. That means eliminating all creek intrusion, preventing new and increased overflow, staying within the budget and staying consistent with the county’s plans.

That resolution also states: “The initial budget for the UMCI Project was $7.7 million; however, the projects needed to address additional overflows caused by MSD’s plan range from $23 million to over $73 million.”

“It’s disgusting and we need to get it done," Driehaus said. "Yeah, we heard this a year ago. And so we offered a resolution. A bipartisan resolution. I don’t know what more we can do, other than say, 'We have allocated the dollars. Get it done.'"

MSD has not moved forward with this project, following the county’s requested 30-inch pipeline. And the agency said the county hasn't even laid out a clear plan yet.

“(The county’s plan) is not a viable option," Christy said last year. "It is not cheaper, it is in fact more expensive and it doesn’t extend the useful life of the sewer."

MSD and the city have also argued that the county is being misinformed by its own team, rather than listening to MSD engineers and the outside firms it has consulted with.

“When it comes down to it, this isn’t about cost, this isn’t about a quicker solution," Christy said last year. "(The county’s consulting team is) just continuing to misinform commissioners, is the way I see it. And to explain there is some other way that we could not have to replace this, even though we have evaluated it."

Councilman Greg Landsman, who is the chair of major projects and the smart government committee, which oversees MSD, has been pushing for the project to start since last year.

“The challenge is that the county owns the utility, but we run it," Landsman said about why MSD has not followed the county's directive. "The 600 employees work for the city. There’s over 100 engineers. They’re saying, you’ve got to do it this way. And it’s hard not to listen to the professionals."

“A year ago, I was terribly frustrated as were those who are most affected by this and the idea that we are still here is so problematic."

He said the Muddy Creek project just points to the larger issue: the system itself.

“This is the larger issue that if we can’t get on the same page, which I think we’ve proven we can’t under this current structure… We are going to face even more issues with the federal regulators. More fines,” Landsman said. “You’re going to have these longer issues that linger.”

That is one point the county does agree with.

“The dysfunction at MSD is playing out here on this project. And who suffers? The community suffers,” Driehaus said.

Landsman is proposing a series of public hearings every two weeks until there is resolution and action on this, and other stalled projects.

Driehaus said she is willing to compromise if it means getting the project done.