Superbubz, the Fairfield 6-year-old who captured our hearts, dies after cancer battle 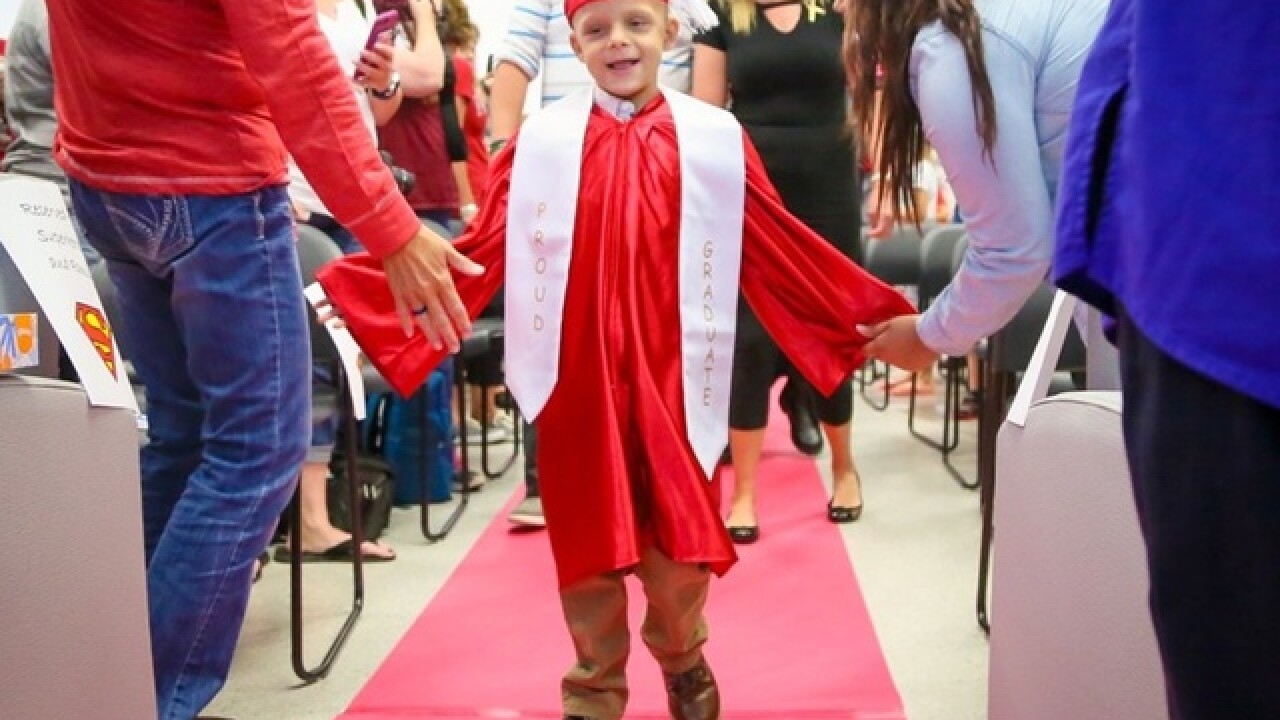 Copyright 2017 Scripps Media, Inc. All rights reserved. This material may not be published, broadcast, rewritten, or redistributed.
Greg Lynch | The Journal-News
<p>Fairfield Central Elementary School first grader Walter Herbert is battling a rare form of cancer. The school district accelerated his journey to graduation with short visits to classrooms in all the grade levels. Central Elementary held a graduation ceremony for him Friday, Sept. 8, complete with cap and gown. Walter walked down the aisle with his family, including his parents, Wally and Emily.</p>

Walter Zayne Herbert, the brave boy who loved superheroes and touched the Tri-State's heart with his happy spirit and bright smile, died at 2:40 a.m., according to his Facebook page "Fight with Superbubz." The post said Walter was pain-free and surrounded by loved ones.

"He amazed us daily! His smile was infectious and his laugh was music to our ears. We know he is now watching over us and finally able to be the carefree child he was meant to be. Heaven gained another angel today," the post said.

The family asked for continued prayers and support.

Members of the community crowded a public visitation for the boy the evening of Oct. 12 at Fairfield Central Elementary School. He is being interred at Spring Grove Cemetery on Oct. 13.

Just three weeks ago, the Fairfield Central Elementary School first-grader earned a high school diploma before a crowd of 300 people who watched the special graduation ceremony. The school district arranged for Walter to complete grades one through 12 over a two-day period. Standing along the stage were adults in Walter's favorite superhero costumes, including Batman, Captain America, Spiderman and more.

Support came from all corners of the Tri-State during recent weeks. The Reds, Bengals, FC Cincinnati and Colerain and Fairfield High School football teams welcomed Walter to practice sessions and games and let him participate and meet his favorite sports heroes. He also got to fly in a Hamilton County Sheriff's helicopter and ride on a Cincinnati police motorcycle.

Perhaps Walter's biggest sports thrill was sitting next to the Reds dugout and seeing his favorite player, Joey Votto, hit a home run. Votto high-fived Walter on his way back to the dugout, then handed the smiling boy his home run bat and the jersey off his back.

So sad to learn about the passing of our friend Walter Herbert, a.k.a "Superbubz". Our hearts are with his family today. pic.twitter.com/RoYAbI4mHk

We are extremely saddened to hear about the passing of #Bengals fan and friend Walter "Superbubz" Herbert.

Our thoughts are with his family. pic.twitter.com/Lkedz3YtxJ

Our superhero Walter "SUPERBUBZ" Herbert passed away after 2yr battle w/cancer. He touched our with his zeal for life. RIPower young man! pic.twitter.com/CpJaoAAjmR

Some people pop into your life & leave a lasting impression. Superbubz did that for my boys, coaches, and myself. Rest in peace my friend. https://t.co/6hlzf6srrc

RIP Superbubz. You are missed already. Thanks for enriching the lives of our @fccincinnati team. Thoughts are with your family.

Our Thoughts Go Out to the Family of Walter Superbubz Herbert https://t.co/5d7RZaMOsr Letter to be sent home with Fairfield kids @wcpo

Superbubz takes the field with us one last time. "When a fellow warrior goes down his brothers take up the battle for him" pic.twitter.com/WVTZEfGULO