And how it can help or hurt their campaigns 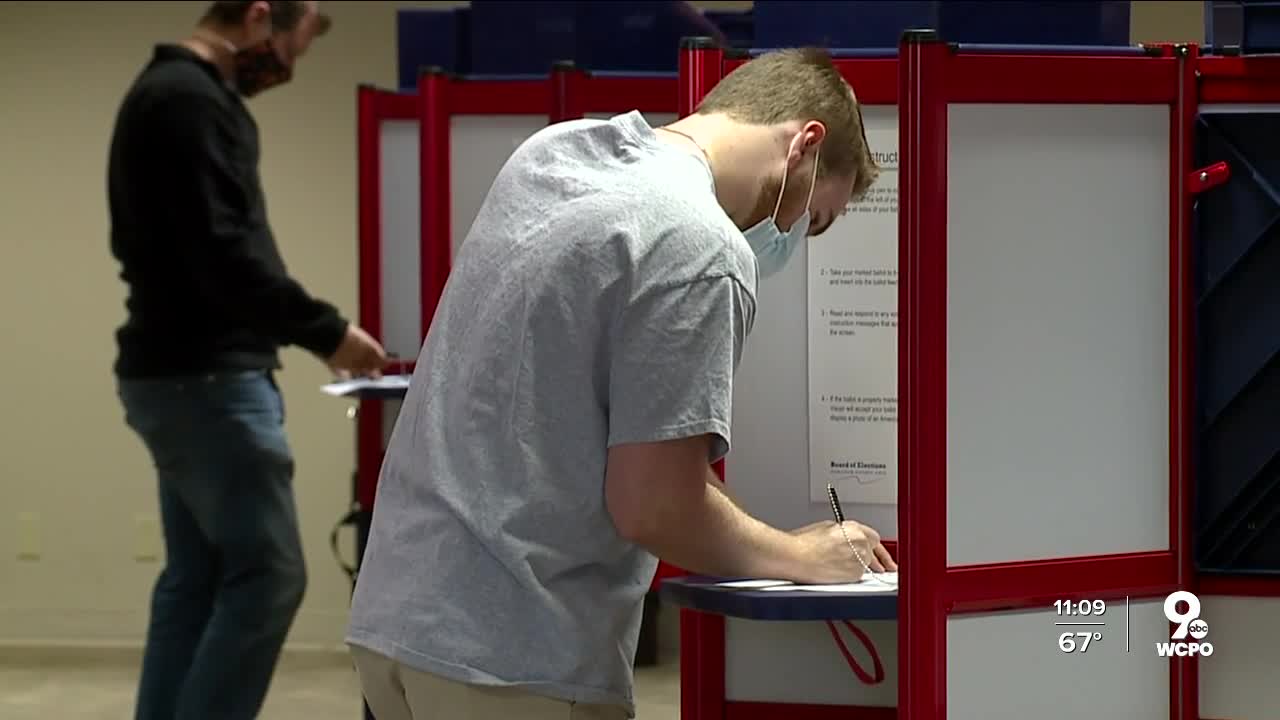 As voters head to the polls this month, there is one race they have been hearing a lot about that is absent from the 2020 election: Cincinnati Mayor. Here's why some candidates have announced mayoral runs so early, and how it can help or hurt their campaigns.

CINCINNATI — As voters head to the polls this month, there is one race they have been hearing a lot about that is absent from the 2020 election: Cincinnati mayor.

The position is up for election in November 2021 as incumbent John Cranley is term-limited and cannot run again. Though the race is more than a year away, campaigns have been well underway for months.

According to the Hamilton County Board of Elections, eight people have picked up a petition packet to run for mayor. Those people include Gwendolyn Edogun, David Mann, Cedric Nelson, Kelli Prather, Raffel Prophett, Sig Rippe, P.G. Sittenfeld and Derrick Blassingame.

However, none have returned their petitions yet. Candidates need at least 500 signatures turned in to the Board of Elections by Feb. 18 in order to officially file and qualify for the May primary. Dave Heimbach, administrative associate at the BOE, said it’s not uncommon that people pick up a petition packet and never actually file it to get their name on the ballot.

Of those eight people, at least five have officially started campaigning. Those include Mann, Nelson, Prather, Prophett and Sittenfeld. Blassingame told WCPO that although he picked up a packet for mayor, he is most likely running for city council.

Niven said the early outreach to voters is, in part, a political tactic.

“The biggest reason why we’re seeing candidates in the news right now is really so they can discourage other candidates from running,” said Niven.

“Why is P.G. Sittenfeld talking about running for mayor now? Why does he have a full campaign team in place? Why? So fewer people run against him. He wants to show folks he is running a full-time, full-fledged campaign.”

Sittenfeld announced his candidacy through a formal campaign event in July. During that time, he also released his first campaign video.

“I'm running for Mayor to help take Cincinnati's 'tale of two cities' and work to make us one – to ensure that no matter who you are, what neighborhood you live in, or what circumstance you were born into, you have the opportunity to experience the best that Cincinnati has to offer,” he said.

Mann, who has since launched a campaign website, sent a letter to potential donors in May telling his supporters he’d be running for mayor. In that letter, he wrote, “I have no ambition beyond Cincinnati and I believe I have yet more to give this community. I promise proven leadership to move the city forward.”

Prather confirmed her candidacy to WCPO in August.

“I am running for mayor because it is time to bring integrity back to City Hall, to restore confidence in the mayor’s office, to be a strong voice, to provide opportunities, as well as to encourage as many citizens as possible to engage in the democratic process as it relates to getting their needs met,” she said.

Prophett made his candidacy official in October. He told WCPO he is running because, “My adult life has been dedicated to public service. I was born, raised, and educated here in Cincinnati. My wife and I built our home here, so I have personal and vested interest in our city’s equity, well-being, success, sustainability, and resilience. That is why I am ready to serve again.”

Nelson did not return an email for comment, but has made posts on Facebook asking for donations and contributions to his mayoral campaign.

“For the voters, a lot of this is silliness because it’s not on the ballot right now. And it’s going to be a long time before anybody asks you to vote for mayor. But, what’s happening right now influences who you get to choose among,” said Niven.

Niven noted there are some downsides to announcing so early, one being that it puts everything those candidates do — good or bad — in the spotlight. For example, Mann has faced public backlash, with some members of the public denouncing his campaign, because of his choice to abruptly end a public budget hearing after citizens calling to defund the city's police department shouted down a dissenter.

Niven also said it can lead to voter fatigue.

“I don’t think it causes any confusion when candidates are running for mayor two years in advance. I do think it causes some frustration. I think that people like the season,” said the professor. “They like to be able to say, ‘this is the time I am going to worry about this.’ And then politics goes away fora little while. The attention span folks have… people can’t be full-time voters. They have to have a chance between elections to live their lives as well.”

So what do the candidates say?

“Filing deadline is early February. If, as seems likely, more than two folks file, there will be a primary in early May. It just takes time to recruit supporters and organize a campaign. I know people, including me, get tired of endless campaigns, but I see no alternative with such an early filing deadline.”

“I kicked off my candidacy later than both John Cranley and Yvette Simpson did in the last mayor's race, and several months after David Mann announced his. And unlike the council field, I'll be on the ballot next spring for a primary election. We plan to run the most robust, energetic, grassroots campaign in the city's history, and are excited to be building that effort.”

“I decided to announce my candidacy prior to the 2020 election to remind voters that We The People have options. Additionally, our candidacy will bring a beacon of inspiration and hope for all.”

“I announced early, primarily for one reason. Most important is that I will need 500 good signatures to get on the ballot for the May 2021 primary. COVID 19 will make it more difficult to acquire the signatures, so I wanted to give myself more time.”

“I took out petitions to run for mayor. However, I am more than likely running for Cincinnati City Council.”

WCPO did not receive a response from Nelson, Rippe or Edogun.