Willard Stargel: The man, the legend behind Stargel Stadium

Why Willard Stargel was such a giant in West End 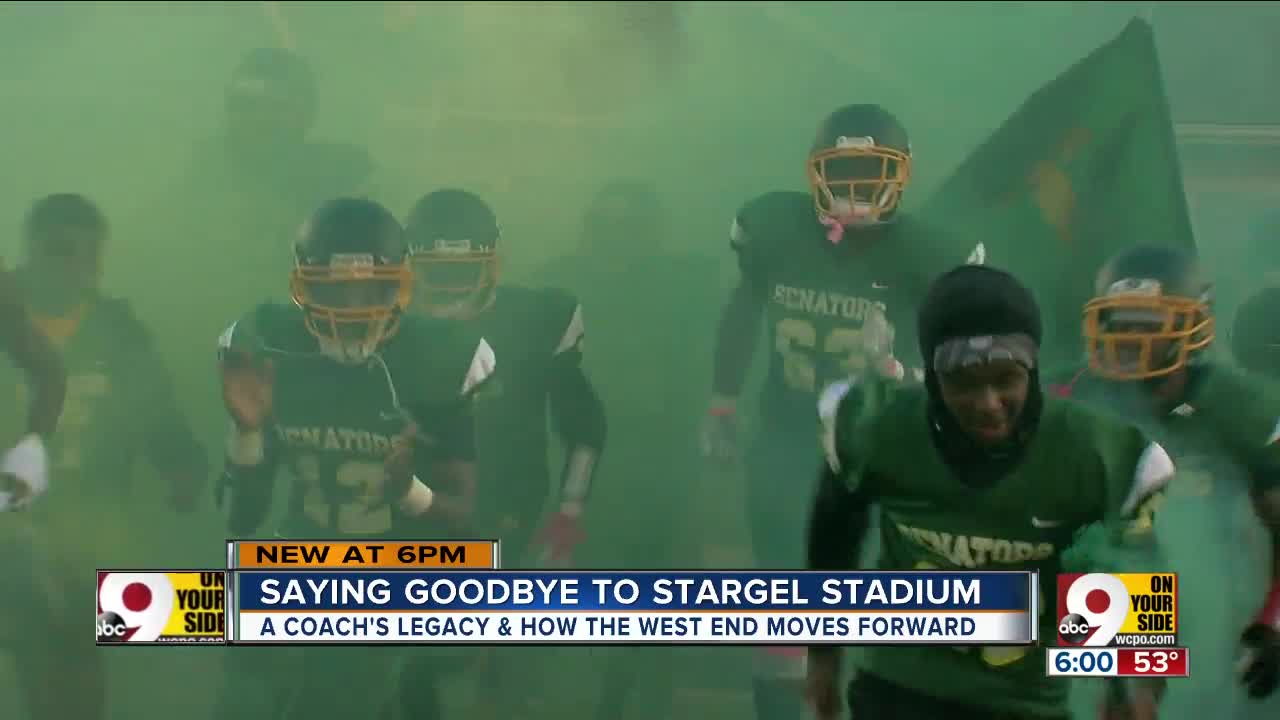 It's the end of an era. The Friday night lights at Taft High School are almost out. Barring a home playoff game, the Senators play their final game at Stargel Stadium this Friday. And in a few weeks, crews will tear it down to make room for a new Major League Soccer stadium for FC Cincinnati. 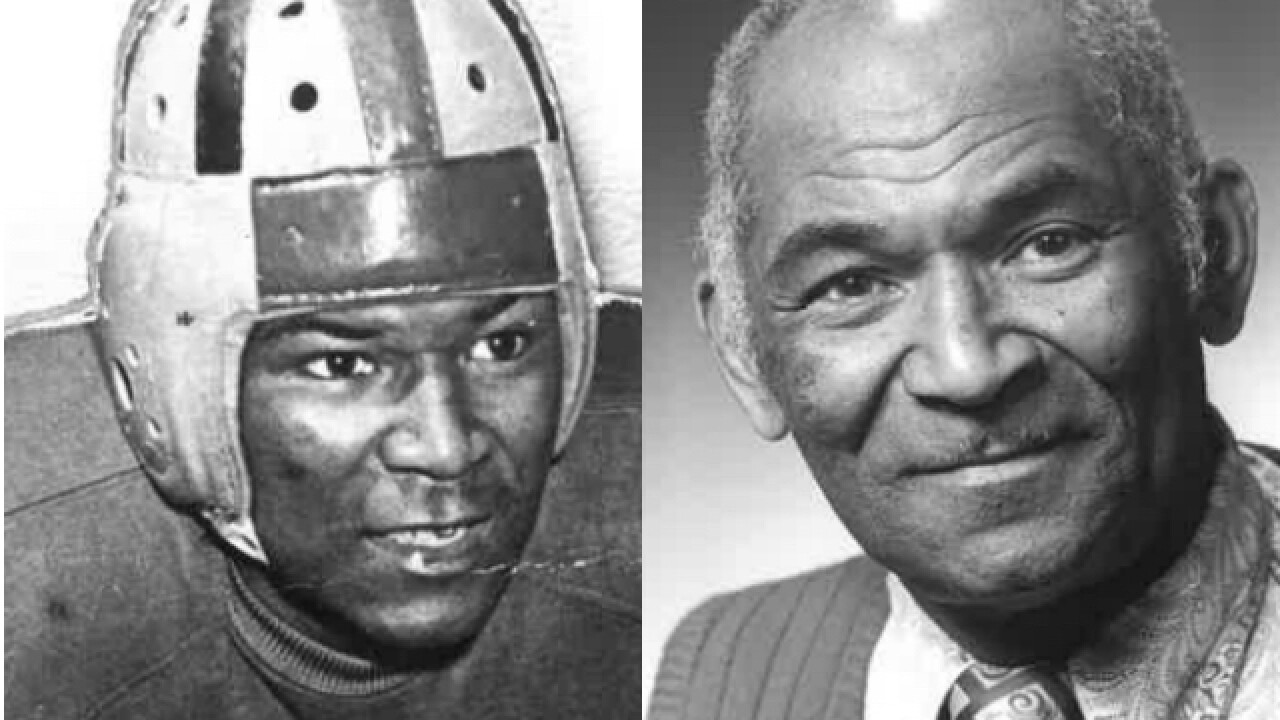 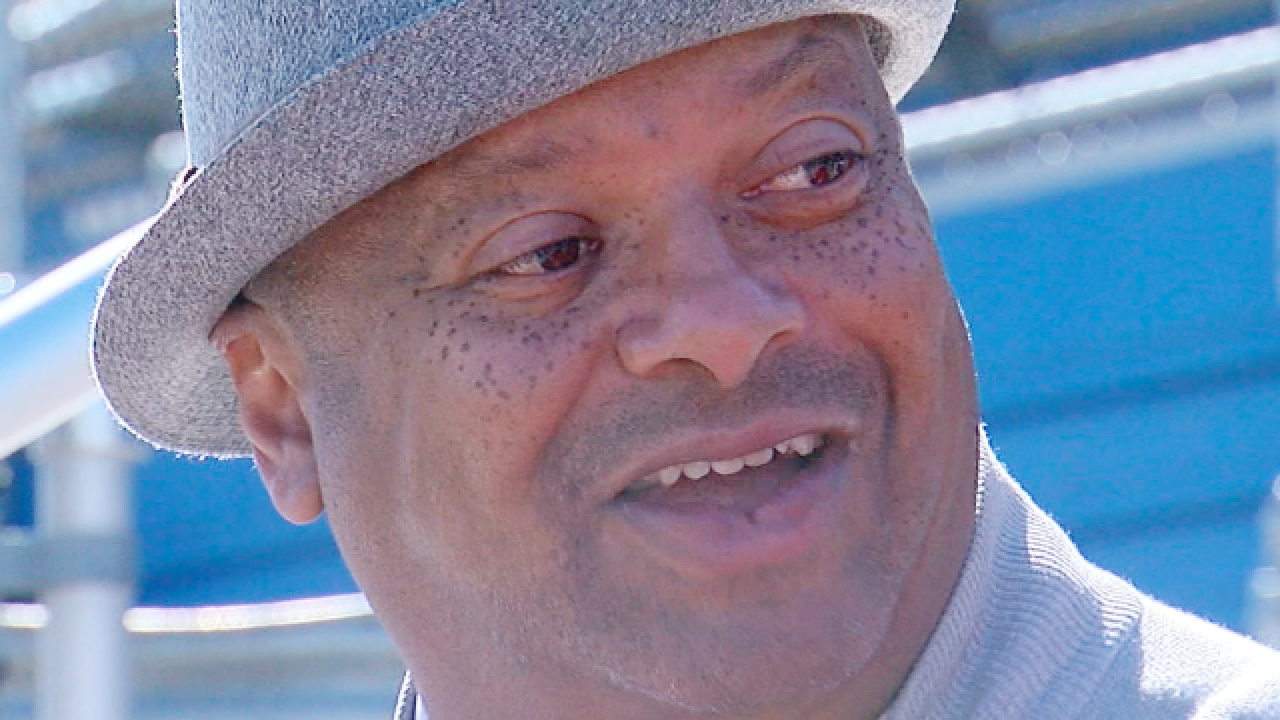 CINCINNATI - It's the end of an era. The Friday night lights at Taft High School are almost out.

Barring a home playoff game, the Senators play their final game at Stargel Stadium this Friday. And in a few weeks, crews will tear it down to make room for a new Major League Soccer stadium for FC Cincinnati.

Many in the West End community are not ready to let go of their historic field because of what it represents: a tribute to Willard Stargel, a former sports hero and a beloved Taft coach and teacher who overcame racism on the field and in the workplace. A man who was a role model and a father figure to many of his players and students. A man who stood as a shining example to generations that if you believe in yourself and work hard, you can break down barriers and succeed.

By this time next year, a new, third Stargel Stadium is expected to be built across the street from Taft, but the memories made on this field won’t be forgotten even by players, coaches and parents who never knew him.

"It means everything to the boys and to the parents and to the fans," Erica Bradley said while watching her son play in Taft’s homecoming game two weeks ago.

"It's emotional. I've been here - this is my 11th here,” said Taft football coach Jeff Cargile. “A lot of memories on this field. A lot of success."

Also in the stands was 74-year-old Carl Ward, a Taft football legend and one of four players from the great 1960 team that went on to play in the NFL.

“They supported me when I was here, so I owe it to them to support them,” said Ward, an All-American at Michigan and three-year pro.

“I guess it was the best part of my younger life - good teachers, good coaches and, most of all, good students.

“We all stood together,” Ward said. “Friday nights were our nights.”

Jason Stargel sat in the empty stands during a sunny afternoon last week and explained what his father’s name on the stadium has meant to his family.

"I think it's an awesome tribute to Dad," said Jason, a Cincinnati firefighter and former UC football star like his dad. "The whole family was just so excited when the Taft alumni suggested that the stadium, Taft Stadium, be named Willard Stargel."

That was Stargel Stadium No. 1 in 1990, before the current stadium was built.

The former Taft Stadium, completed in 1986, was renamed in Stargel’s honor. No one disagreed over the name, but there was some disagreement over how to pronounce it, Jason said.

To this day, West Enders debate whether it’s Stargel with a soft G or Stargel with a hard G. Jason said his family uses a hard G, but they don’t object to the other sound.

It proudly displays Willard Stargel’s name on the field, the press box, the scoreboard and the locker room building. A plaque of Willard Stargel hangs on the wall facing the field.

“It just allows us to realize Dad had an impact in the community that so many of the African-American populous grew up in back in the '40s and '50s,” Jason said.

Willard Stargel made a name for himself at Old Woodward High School, where he was a standout football end and basketball guard and the city high hurdles champion for two years running and jumping. Stargel went on to UC and lettered in football, basketball and track and became one of UC’s first black football players in 1942. Because of his race, he wasn’t allowed to play against some southern teams, including Kentucky, Tennessee and Georgia Tech.

After he went off to World War II, he came back to UC in 1946 with one year of eligibility left and  -- still the only black player on the team – played end on offense and defense. Stargel helped UC to one its finest seasons, including a win over Indiana. But when UC  got an invitation to play Virginia Tech in the Sun Bowl in Texas, it came with one condition.

Rather than leave Stargel home, UC’s president turned down the invitation, but the board of trustees overruled him and sent the team instead. UC won, but it was a tainted victory to say the least.

Jason, though, said his father wasn’t bitter about it.

"It hurt Pops, I think, a little when UC decided to go the bowl game and leave him home when (Virginia Tech) said they wouldn't play against UC because dad was on the team, but they took a vote and that was the leadership that was at the University of Cincinnati at that time," Jason said.

Stargel was prepared to teach high school math after getting a bachelor’s degree in 1947 and a Master’s in 1952, but Cincinnati Public Schools didn’t hire blacks to teach high school, he said. The best offer he could get was teaching phys-ed in junior high, and he had to go back to summer school to get credits to qualify.

Stargel finally got his first chance to teach high school when Taft opened in 1955. He became assistant football coach and, over time, head track coach, but he never got to be head football coach at Taft.

The early '60s were the glory days of Taft football. They won the Public High School League in 1960 and '61 and -- amazingly -- sent four players from the 1960 team – Walter Johnson, Al Nelson, Cid Edwards and Ward – to the NFL.

Stargel quickly won the respect and admiration of the team, according to a former player, Malcolm Lindsay Allen Sr.

“Mr. Stargel should have been the head coach, but at the time there were no black head coaches in the PHSL,” Allen wrote in a book, “100 Or So Boyhood Memories of the Real West Endies.”

“Even though we loved Joe Corcoran (the white head coach), our confidant was Mr. Stargel … He knew, better than we, what was what.”

“He was sort of like a father to many of us,” Bobby Chapman, who played at Taft in the late 50s, said in an Enquirer article in 1990. “Many of the football players came from homes with no fathers. Mr. Stargel kind of filled in that role for so many of us. He would see to it that we got home after practice and he would make sure we got to school on time.”

Chapman, a 5-3, 120-pound running back when he started playing football at Taft, said he earned a football scholarship at Northern Illinois thanks to Stargel.

“He believed you could do anything you want to do,” Chapman said. “He taught me how to use my speed. I did very well because of him.”

Jason was just a kid at the time, but he heard the stories and saw evidence of his dad’s impact first-hand.

“Dad had such an impact, not just as a coach or an educator, but he was involved in their lives,” Jason said. “He was always around the kids and it was evident as they grew up and paid homage to him and I’d just be in the company of these wonderful people from Taft who would tell me to scoot over so they could sit next to Dad.

“I didn’t even realize Dad wasn’t a head coach until my later years in life because it was just so unthought of to me that Dad wasn’t the head coach because of so many people reaching out to him.

“Dad was an educator about life and teaching people how to walk."

That included Jason and his two brothers and two sisters, he said.

"He said it's important that we be better. We can't be judged inadequate,” he said, referring to racial prejudices. “He didn’t let it hold him down and he wouldn’t allow his children or the kids under his care to fall prey to that degree that it pushes you down to where you can’t overcome it.”

And he told Jason, in particular, to be himself.

“He would always say, ‘Son, don’t appear to be, but be.’ There’s a lot of people that carry themselves in a certain way, but then behind closed doors  they’re not, and he was really intent on me trying to be the person that you see all the time,” Jason said.

That's part of the legacy of Willard Stargel.

“He was grateful for getting the head coaching job at Walnut,” Jason said. “He didn’t hold a lot of resentment.”

Stargel was head football coach at Walnut Hills through 1978 but remained a fixture in the West End. That’s part of the reason people were so upset when they first learned FC Cincinnati wanted to bulldoze Stargel Stadium and replace it with a new $250 million soccer stadium.

"Around here in the West End, there is no other stadium except Stargel Stadium where the Blacks could look up to and say, 'Hey, I knew him,’ " said Sterling Trice, Taft Alumni Association president.

Trice was front and center during the fight to keep Stargel Stadium standing and keep FC Cincinnati out. He has concerns over the West End's history and its future.

"My heart has not changed. What has changed is we lost,” Trice said. “So they got the stadium. They're going to build the stadium. What we need to do now is to make sure that FC Cincinnati adheres to all those promises."

Monica Williams is counting on that, too.

Her business, Just Cookin', is feet from Taft High School and will have to move out to make room for the new stadium's construction. She leases the space and said she was offered $20,000 to move. That’s not enough to reopen her business somewhere else, she said.

"These days, not even a food truck,” Williams said. “It gets me maybe 30 days to pay some bills and recoup and find out where I'm going to go work. That's what $20,000 does, literally."

FC Cincinnati leadership said they're working with Williams and others about how to move forward. Jeff Berding, the soccer club’s president and general manager, knows growing pains exist.

"Change is difficult. I understand that,” Berding said. “The status quo is a lot easier, a lot less scary for many people. We are representative of change."

But Berding said they're trying to retain the neighborhood's character and complexion.

"We respect the fact that change has not always been good in the West End and other parts of our community, and we're trying to show that genuinely we want to be about improving the future for our city, for the people of our city and particularly for our neighbors in the West End," Berding said.

Count that, too, as part of the legacy of Willard Stargel.

Jason Stargel says he’s a soccer enthusiast and he’s pro-FC Cincinnati, but he also wants to protect his father's legacy. He's optimistic about what's to come and what he hopes will remain.

"Things have always seemed to work out well for Pops and for the family and just doing the right thing seems to always be fruitful, so we hope," Jason said. "We keep our fingers crossed."