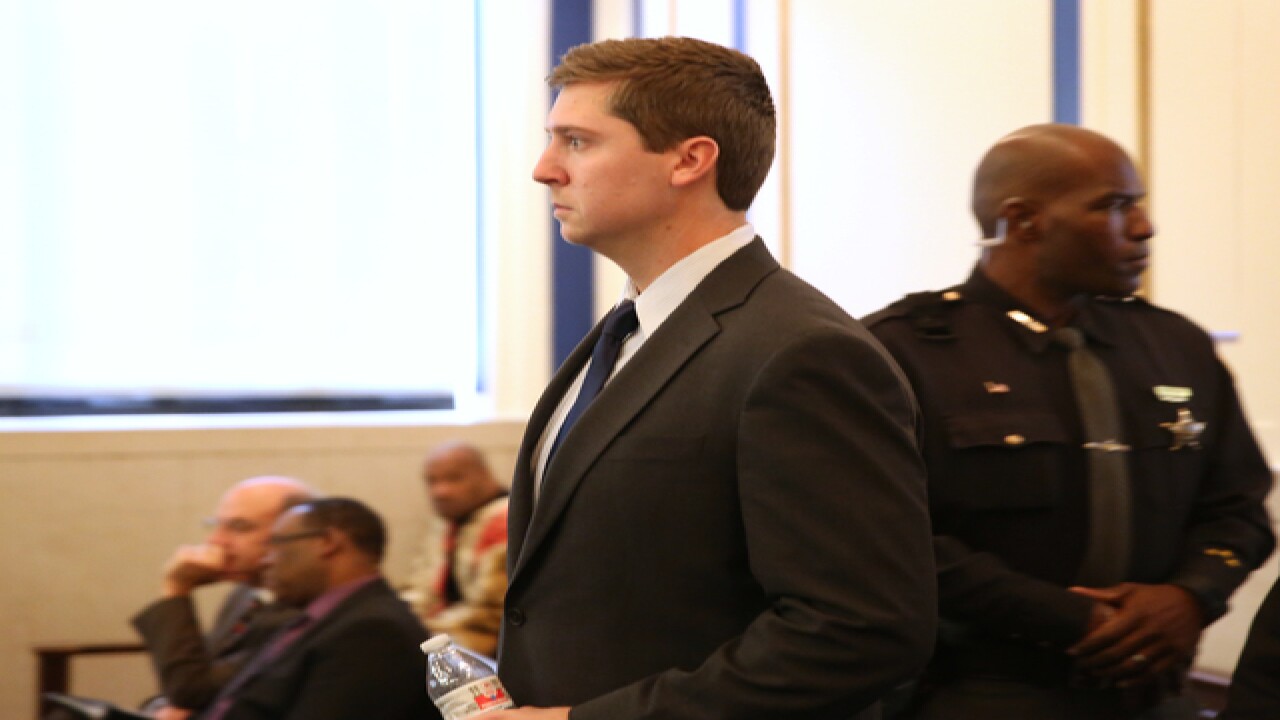 The Enquirer/ Cara Owsley
<p>Ray Tensing enters the courtroom on the third day of deliberations after attorneys were called back. Judge Megan Shanahan declared a mistrial. After nearly three days, the jury could not reach a verdict on either charge. Ray Tensing, the former University of Cincinnati police officer, is charged with the murder of Sam DuBose during a routine traffic stop on July 19, 2015.  (The Enquirer/ Cara Owsley)</p> CINCINNATI – The new judge assigned to the Ray Tensing murder retrial says he may recuse himself as early as Tuesday.

Judge Thomas Heekin says he served as guardian ad litem for one of Sam DuBose's children's during a civil case against the University of Cincinnati. That was before Heekin took the bench June 4 in Hamilton County Common Pleas Court.

Heekin told WCPO he is considering whether that should exclude him from trying the next case against the former University of Cincinnati police officer. Heekin was selected Monday to replace Judge Megan Shanahan, who disqualified herself from the retrial.

"It's the court's opinion that the retrial should be conducted with a blank slate on all matters surrounding evidence and procedure." said Shanahan. "I find that this court is otherwise disqualified to preside over the retrial."

The judge didn't mention that she is expecting a baby in December.

Shanahan did not rule on the prosecution's motion for a change of venue, leaving that for her replacement.

When a Common Pleas judge recuses him/herself, a computer program selects a replacement judge in a random drawing, according to the Hamilton County Courts assignment commissioner, Dan Blanton. If all the judges recuse themselves, the presiding judge, Robert Ruehlman, would request the Ohio Supreme Court choose a visiting judge  from outside the area or a visiting judge already assigned to Common Pleas court.

Prosecutor Joe Deters is pursuing  a second trial for Tensing, who shot and killed DuBose during a traffic stop on July 19, 2015. Shanahan declared a mistrial on Nov. 12 after the jury could not reach a unanimous decision on either murder or voluntary manslaughter after four days of deliberation.

Shanahan heard motions from the media and agreed to release jurors questionnaires by 4 p.m. Tuesday after names, addresses and other personal, identifying information is redacted.

Neither Deters nor defense attorney Stew Mathews would comment on Shanahan's recusal. DuBose's sister, Terina Allen, said all the family wants is a jury that sees the case the way the prosecution does -- murder or voluntary manslaughter.

"I'm shocked that she did recuse herself, but I think it's because of the interest of justice and time," Lewis said. "The family doesn't want to have it delayed any longer than necessary."

The move did not surprise criminal defense attorney Marty Pinales, who says key decisions must be made on a new trial date and change of venue. Deters previously said he expected the retrial to take place in the spring.

Before leaving the bench, Shanahan praised the defense team and Tensing's family, the prosecution and DuBose's family and even the demonstrators, whose actions she called "peaceful and meaningful."

The judge had special praise for jurors, saying they tried harder than anyone could have expected to reach a verdict.

Get a recap of our live coverage in the blog below: