'Validation' for nonbinary people as Merriam-Webster adds singular 'they' 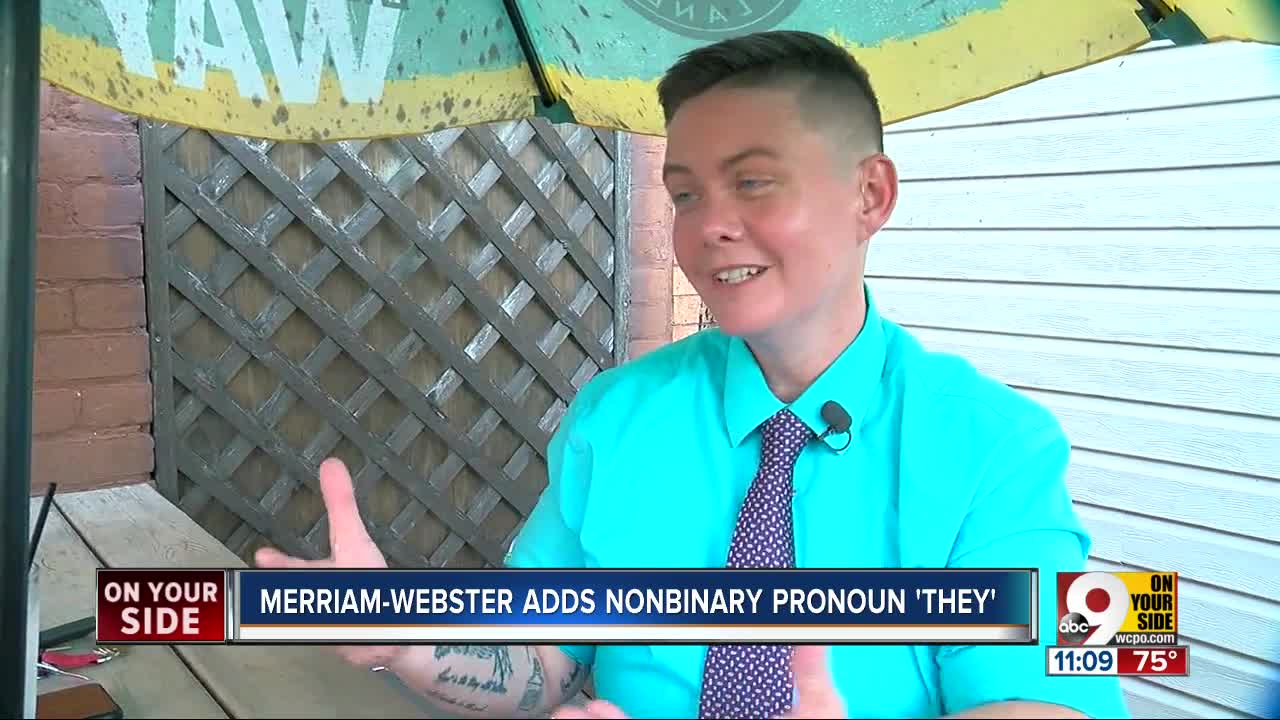 Merriam-Webster expanded the dictionary definition of the word “they” in a Tuesday announcement, formally recognizing it as a singular pronoun for a person who identifies as nonbinary — that is, neither a man nor a woman.

CINCINNATI — Merriam-Webster expanded the dictionary definition of the word “they” in a Tuesday announcement, formally recognizing it as a singular pronoun for a person who identifies as nonbinary — that is, neither a man nor a woman.

Sorry, you’re going to have to explain that some more.
Essentially, to be nonbinary is to reject identifying oneself as one of the binary genders: man or woman. Nonbinary people might instead place themselves in an androgynous space between the two, alternate gender expressions or separate themselves completely from either social role, mixing and matching traditionally gendered forms of presentation such as clothing and hairstyles. They are broadly included in the transgender community.

It’s a usage supported by hundreds of years of English-language writing, according to a Merriam-Webster blog post explaining the decision. Referring to a person as “they” before their gender is known has been common since at least the 1800s, and instances of a person consciously choosing to reject “he” or “she” to stick with “they” for themselves date back to the 1950s.

Tristan Vaught, director of education and training at the Cincinnati-based Living with Change, has identified as nonbinary and used the singular “they” for years. Seeing it recognized by the dictionary was a long-awaited moment of affirmation.

"For me, it's just kind of validation,” they said.

Vaught knew they were different from others since they were a preteen, but the alternative labels available then didn’t quite fit. They came out as a lesbian during high school — it wasn’t right, but it was the closest to correct they could get. They were 19 and attending the University of Cincinnati by the time they realized they were nonbinary.

Explaining it to others in the decade-plus since has occasionally been frustrating, they added, but they believe the best way to help other people understand is to be patient.

"They'll be like 'That's not natural. This isn't natural,’” they said. “And a lot of it is just planting that seed and giving it space and grace."

Vaught has done their best to plant that seed throughout the Midwest — not just at UC, where they became the first-ever program coordinator at the school’s LGBTQ center, but also at Indiana University-Purdue University Indianapolis, where no LGBTQ center existed at all. They started one.

"I will say it's important on college campuses because you want your students to thrive, not just survive the experience,” they said.

Universities in 2019 are more attuned to the existence of nonbinary identities than they once were. In the Cincinnati area, UC, Northern Kentucky University and Miami University offer gender-neutral housing. Miami also has a designated web page helping nonbinary students find gender-neutral restrooms on campus.

On a wider scale, pop culture and government have begun to embrace nonbinary identities, too. Some states allow people to change the sex listed on their ID or birth certificate to X. “Stay With Me” singer Sam Smith recently announced on Twitter they are nonbinary and would prefer to be addressed as “they.”

The pronouns can feel unintuitive or ungrammatical for newcomers, Vaught acknowledged. They don’t begrudge any person who makes a mistake as they struggle to adjust to the new vocabulary.

But they hope others will try to be like them — patient. Understanding. And willing to learn.

"It's similar to names,” Vaught said. “Names are hard to remember. We could sit here for a couple of hours and not come up with an exhaustive list of names. But I'm not going to run around and look at people and go, ‘You're only Bob’ and ‘You're only Mary,’ and that's all I can remember. Pronouns are similar."