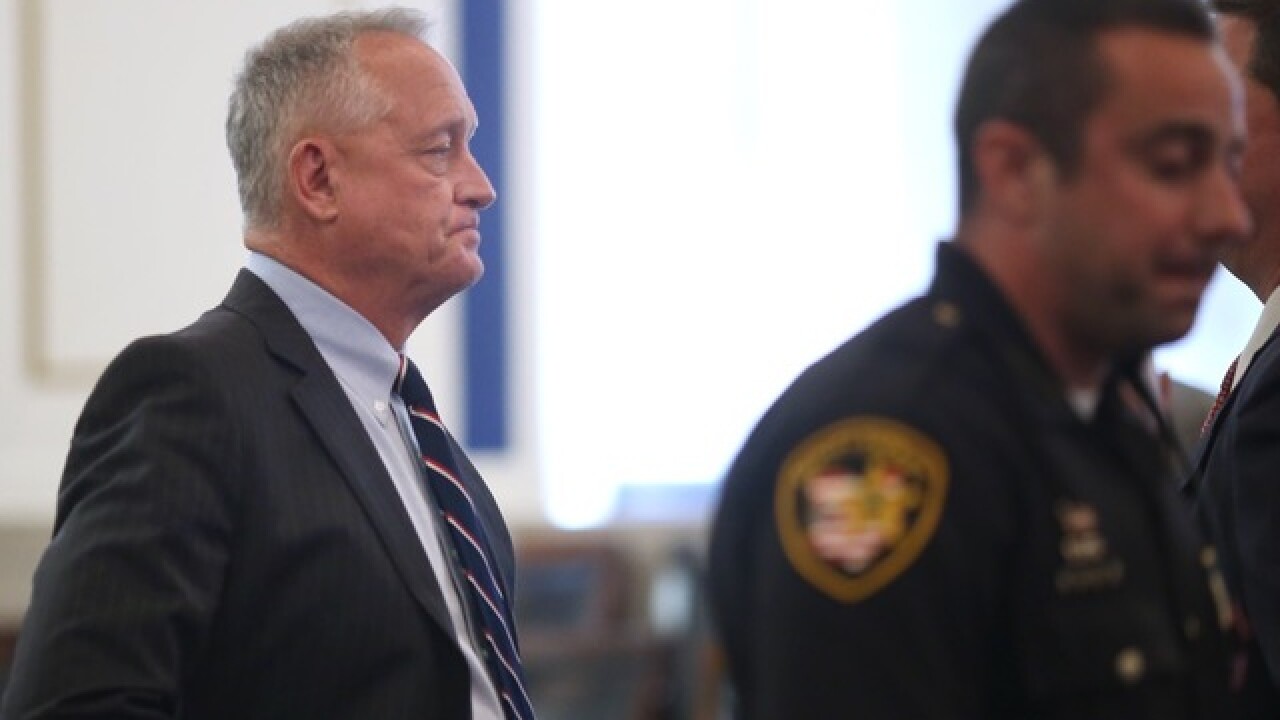 Carrie Cochran
<p>Hamilton County Prosecutor Joe Deters gets ready for the start of the Ray Tensing trial in Judge Meghan Shanahan's courtroom. The former University of Cincinnati police officer is charged with murder in the shooting death of Samuel DuBose. Tensing remains free on a $1 million bond. His attorney Stew Mathews has said Tensing fired a single shot because he feared for his life.</p> CINCINNATI – Tensions were already rising as parties in the Ray Tensing murder trial came face to face in court Tuesday for the start of jury selection.

Calling them "idiotic" and claiming they came "to cause trouble," Prosecutor Joe Deters kicked a Black Lives Matter representative and two others out of court  just moments before Tensing walked in with his attorney and family members.

Three people were ordered from the proceedings for being disruptive, but they were not arrested, Hamilton County Sheriff's spokesman Mike Robison said.

"Those people are just idiotic — I mean, they really are," Deters said. "They don’t understand process. They came here to cause trouble and I said, 'You’re leaving in two seconds,' and they got thrown out, so they’re not coming back."

PHOTOS: First day inside the courtroom

Black Lives Matter Cincinnati and the Amos Project have declared that they are determined to make their voices heard in the case and to hold the court accountable.

"This is to put a little bit of pressure on the city and try to give them an idea that we see you, we saw the video, and anything less than a conviction, with all this evidence, falls into the bucket of anger that is already stirring," said Black Lives Matter organizer Brian Taylor.

Members of the clergy and civil rights organizations met on the courthouse steps to "encourage the community to be vigilant in holding our court system accountable for fair and impartial treatment of all people."

Tensing stared straight ahead and said nothing as he entered Judge Megan Shanahan’s courtroom. The former University of Cincinnati police officer is charged with murder and voluntary manslaughter in the shooting of Sam DuBose after a traffic stop in Mount Auburn on July 19, 2015. Tensing is white; DuBose was black.

Members of DuBose's family were in court, too.

RELATED: Everything you need to know about the Tensing trial.

Tensing sat quietly for hours listening to the judge instruct 234 potential jurors — 50 at a time.

"Your participation in this process contributes greatly to the fair and equitable administration of justice in this case," Shanahan told each group.

The key piece of evidence is video of the fatal shooting from Tensing's body camera, and it’s likely that many prospective jurors have seen it. But the judge reminded them Tensing is innocent until proven guilty and ordered them not to discuss the case — especially on social media.

"It is hard to resist not discussing this," Shanahan said. "It is an order of the court.  There are consequences to that.  It is a very expensive process if we would have to declare a mistrial, and that is just the tip of the iceberg.

"I feel very comfortable that the judge will follow the law and not permit it to come in," Deters said. "It doesn’t have any relevance."

Tensing claims self-defense in that he feared he would be run over by DuBose’s car. DuBose started to drive away  after refusing Tensing's order to get out of his car.

"These questions are not designed to pry into your personal affairs," Shanahan said, "but to discover if you have any knowledge of this case or any preconceived opinion that you cannot set aside or if you’ve had any experience in your personal or family life that might cause you to favor either party.

"These questions are necessary to ensure each party a fair and impartial jury."

Attorneys will review the questionnaires and begin actual questioning next week to seat a jury.

Tensing will return to court at 12:30 p.m. Wednesday when Shanahan hears new motions in the case. That's expected to take about a half-hour.