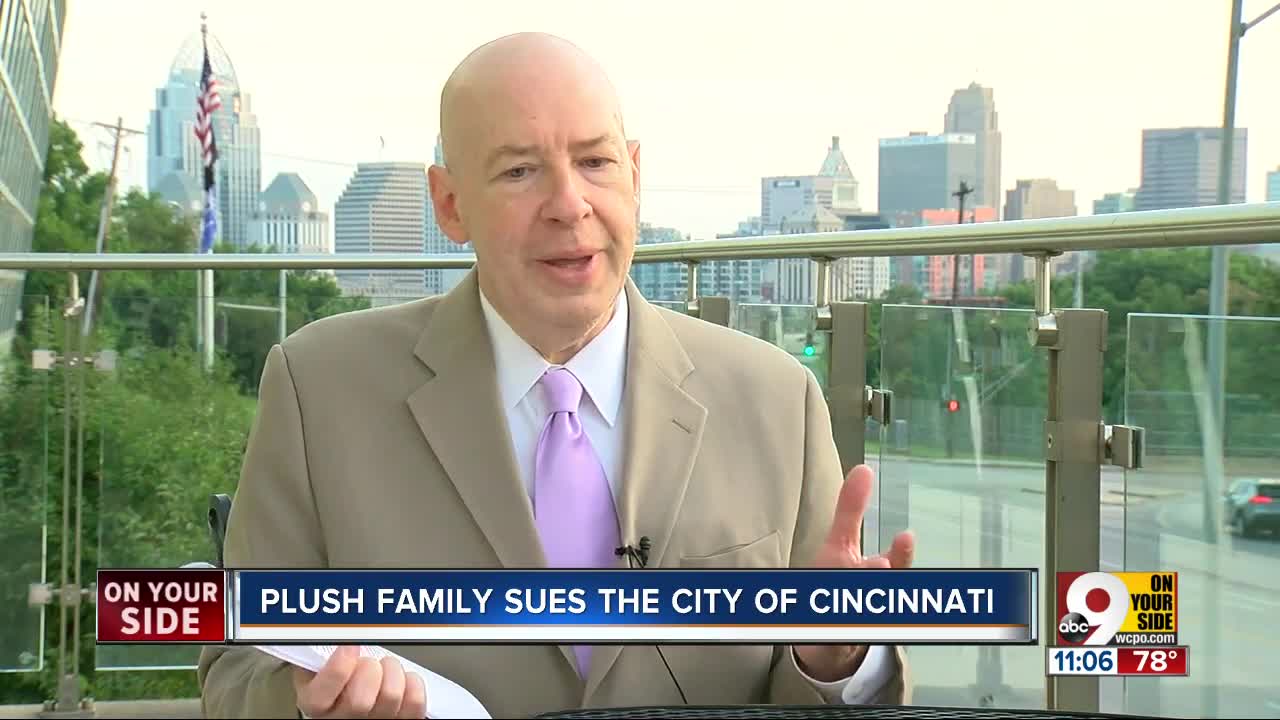 Ron and Jill Plush's 16-year-old son, Kyle, suffocated to death in the back of his car despite making multiple 911 calls for help. According to their attorney, the family feels the 911 operators and police officers involved haven't been held sufficiently accountable.

CINCINNATI — If Ron and Jill Plush were really suing Cincinnati for $25,000 in a case likely to cost them millions in legal fees, “it would be laughable that they would bother,” attorney Mark Krumbein said Monday night.

But that’s not what they’re doing, according to family attorney Jennifer Branch. The wrongful death suit they announced Monday was filed for $25,000 because that’s the minimum amount for which they can sue within the city. For the family of 16-year-old Kyle Plush, who suffocated in his van despite making multiple 911 calls for help, it’s not about money at all, Branch said.

Instead, “we’re litigating on their behalf to find the answers to all the problems that let to the death of their son,” co-counsel Al Gerhardstein told reporters in a Monday news conference.

Krumbein, who is not involved in the case but whom WCPO interviewed as a legal expert, said that makes more sense. It could even get the job done, provided they either win in court or generate enough publicity for the city to surrender.

“There’s nothing like getting a huge lawsuit successfully pursued against somebody to successfully change,” he said, noting also that the Plushes would be likely to receive far more than $25,000 if they did win.

Although the city has implemented wide-ranging 911 reform to prevent similar incidents in the future, Gerhardstein and Branch said Monday the Plushes were still unsatisfied with the changes and the extent to which people involved in Kyle’s death had been held responsible. In addition to the city, the family’s suit names two 911 call-takers who answered Kyle’s calls and two Cincinnati police officers who were called to search his location as defendants.

The latter pair, Officers Edsel Osborn and Brian Brazile, never left their car when they drove past the parking lot where Kyle was asphyxiating. They drove away without finding him.

The biggest challenge for the Plushes, according to Krumbein, will be getting the case to trial. The trial process is expensive; the pressure to settle ahead of time instead of taking a case to the courtroom is intense.

“A lot of the time, things get settled on the courtroom steps,” he said.

And if they don’t, that leaves both the plaintiffs and the defense facing down a high-stakes confrontation. Whoever loses would likely lose hard, Krumbein said. To the tune of millions.

That might not matter to the Plushes, however, he said.

“This may be an all or nothing case where maybe the Plush family feels, ‘Hey, this has got to go to trial, we want our son’s story to be known so there won’t ever be another Kyle Plush,’” he said.