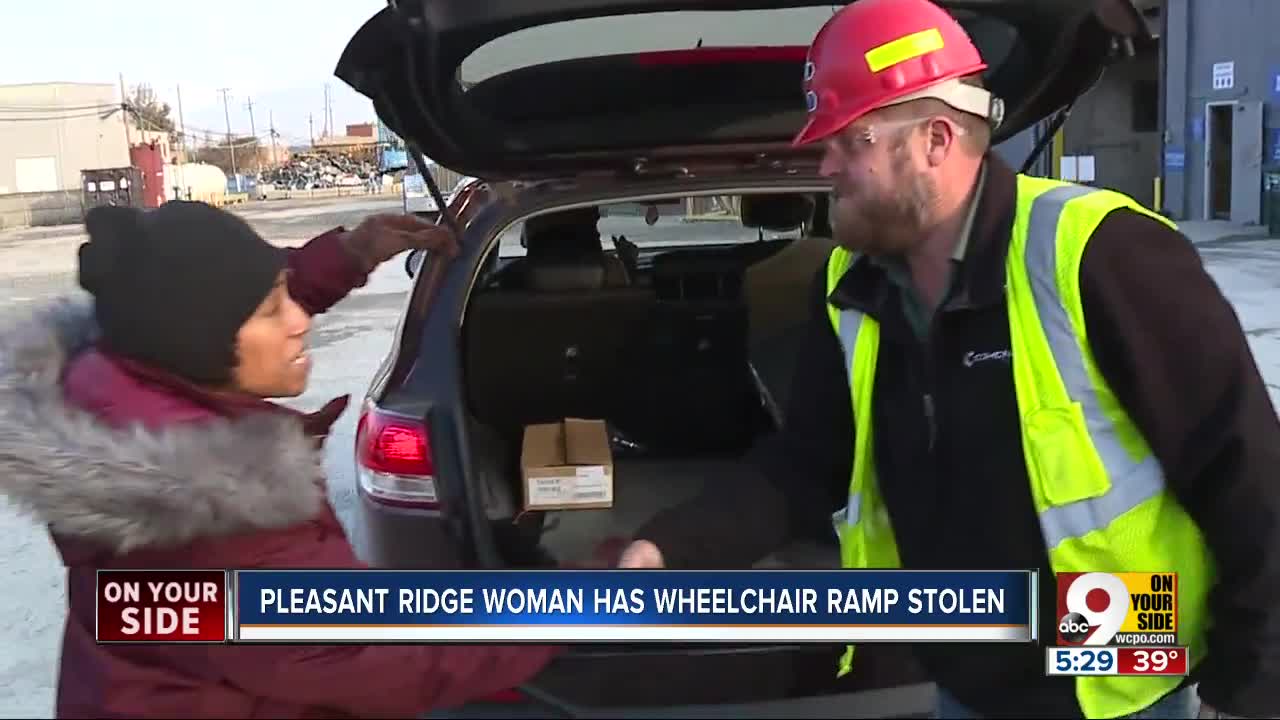 Somebody stole an elderly woman's metal wheelchair ramp. When it showed up at Cohen Recycling, Tamara McLean thought her problems were over. But three weeks later, she was still waiting for Cohen to return the ramp.

It's one of those how-low-can-you-go situations. But after some digging, I was able to get the metal ramp from a scrapyard back to the family.

Tamara McLean said someone snatched the ramp off her mother's front porch in Pleasant Ridge around Oct. 21.

“I immediately went to the police department,” McLean said.

Days later, the family found it less than 2 miles away -- among the scrap at Cohen Recycling on Highland Avenue.

“We say, ‘That's my mom's ramp. I have a receipt to attest that is my momma’s ramp,’” McLean said.

But it had been nearly a month, and McLean was still waiting for Cohen to release the ramp.

She feared she would have to buy it back.

“She's a breast cancer survivor. Was supposed to go have her regular mammography. Had to reschedule it twice,” McLean said.

As soon as I spoke to Cohen, the company said it could give the ramp back the same day.

Cohen said McLean did let them know about this last month, but the company couldn’t say what the holdup was.

Cohen does check your ID and take your picture when it buys stuff to deter theft. Police said they're following up.

"It's kind of despicable to think someone would take a handicap ramp," Lt. Steve Saunders said.

Here’s the takeaway: Be able to identify your stuff - even in a pile of metal.

"Mark your items. Photograph your items," Saunders said. "Store it in a place where you can get to it if you need. Then if you have to make a police report, you have a way to identify your property."

McLean hopes this thief realizes what damage he or she caused.

“Why would you steal a person’s ramp?” she asked. “I understand it's metal. I understand you may have a problem - some type of desperation - but don't you understand … did you correlate that that's a necessity for that person that lives there?”

“Cohen Recycling is very serious about stopping scrap metal theft. In fact, we have been on the forefront of helping the state draft legislation specifically to address this issue.

“There is strict protocol in place at Cohen designed to prevent the purchase of stolen material. Our employees go through extensive training and receive regularly updated information to identify potential red flags.

“All customers are required to provide valid photo ID, which is checked against a state-issued “Do Not Buy” list before unloading any material, and there is also a photo record of every transaction.

“Cohen works closely with state and local law enforcement to facilitate the investigation of all metal theft related issues, and we pride ourselves on being part of the solution. We appreciate that this instance was brought to our attention and look forward to its resolution.”