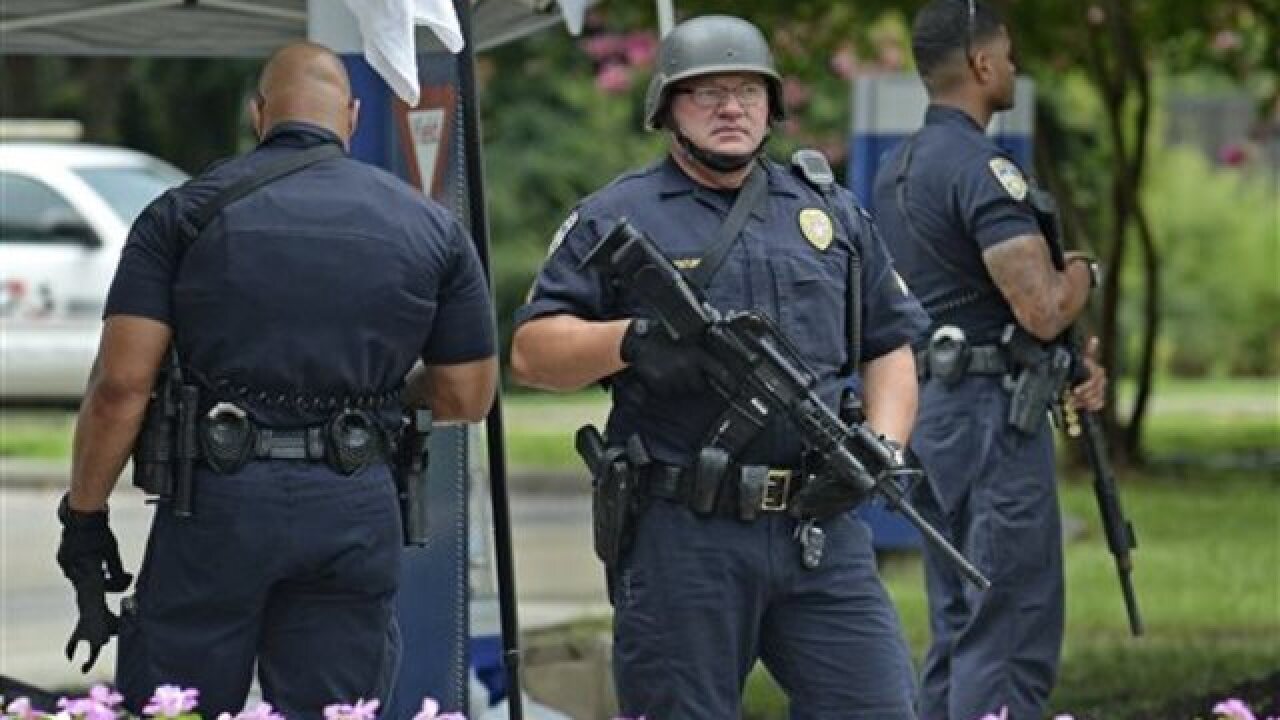 Hilary Scheinuk
<p>Baton Rouge Police stand at a checkpoint at the entrance of Our Lady Of The Lake Medical Center, Sunday, July 17, 2016, in Baton Rouge, La. Multiple law enforcement officers were killed and wounded Sunday morning in a shooting near a gas station in Baton Rouge. (Hilary Scheinuk/The Advocate via AP)</p> Chris Haddle had a lot on his mind Sunday.

Haddle is a sergeant with the Kenton County Police Department, and, along with his fellow officers in uniform all across the country, Sunday marked the latest in a continuing string of officer-civilian, and vice versa, deadly shootings, this time leaving three officers and one suspected gunman dead in Baton Rouge, La.

"You get to thinking it can't get any worse," he said. "Then something happens."

It's a moment that's still too fresh for many in law enforcement nationwide to comprehend, with questions about policing, race and gun control swirling into a din of opposing opinions across social and political spectrums.

Tri-State law enforcement agencies -- especially as Cincinnati kicks off this year's National Association for the Advancement of Colored People annual convention -- say they are especially on alert as shooting investigations continue to unfold in the coming days.

But not without coming together to mourn the three officers killed and three more wounded during a shootout with a lone gunman in Louisiana's capitol early Sunday morning.

Haddle says it's not really just about mourning one specific loss anymore.

"It's a disturbing trend here, these last couple of weeks," Haddle said. "We still have the mourning bands on from the officers from Dallas. And here we are a couple weeks later... another one occurs."

The shootings in Dallas came in the wake of two back-to-back, fatal shootings of black men by police officers, including one in Baton Rouge.

In a move echoing Cincinnati City Manager Harry Black's address to convention-goers Saturday, Turner demanded the convention initiate "a serious conversation about policing and gun violence," but also asked attendees to "join (him) in a moment of silence."

Again, awareness of the need for action mixed with unfathomable grief.

Now, these events continue to serve as an ostensible call to action to many, in a few distinct ways.

"There are certain events of this type where SWAT doesn't need to be there to respond. SWAT needs to be there as a presence," he told WCPO Sunday.

These were the SWAT units who secured the scene after police said officers shot dead 29-year-old Gavin Long, the suspected gunman.

Haddle said Kenton County police officers would, at least temporarily, begin doubling up on some patrols, in anticipation of any calls for assistance that might come from across the river in coming days.

For Rev. Peterson Mingo, with the Cincinnati Human Relations Commission, the tragedies -- the recent deaths of black men by officers' hands and vice versa -- boil down to a breakdown in communication.

"The answer right now, in my opinion, is better communication, patience, because we can't continue like this," he said. "We need to get back to basically having a community-based police department."

Turner seemed to agree during his NAACP speech: "It's a wake-up call... but we have to be vigilant, no matter what."