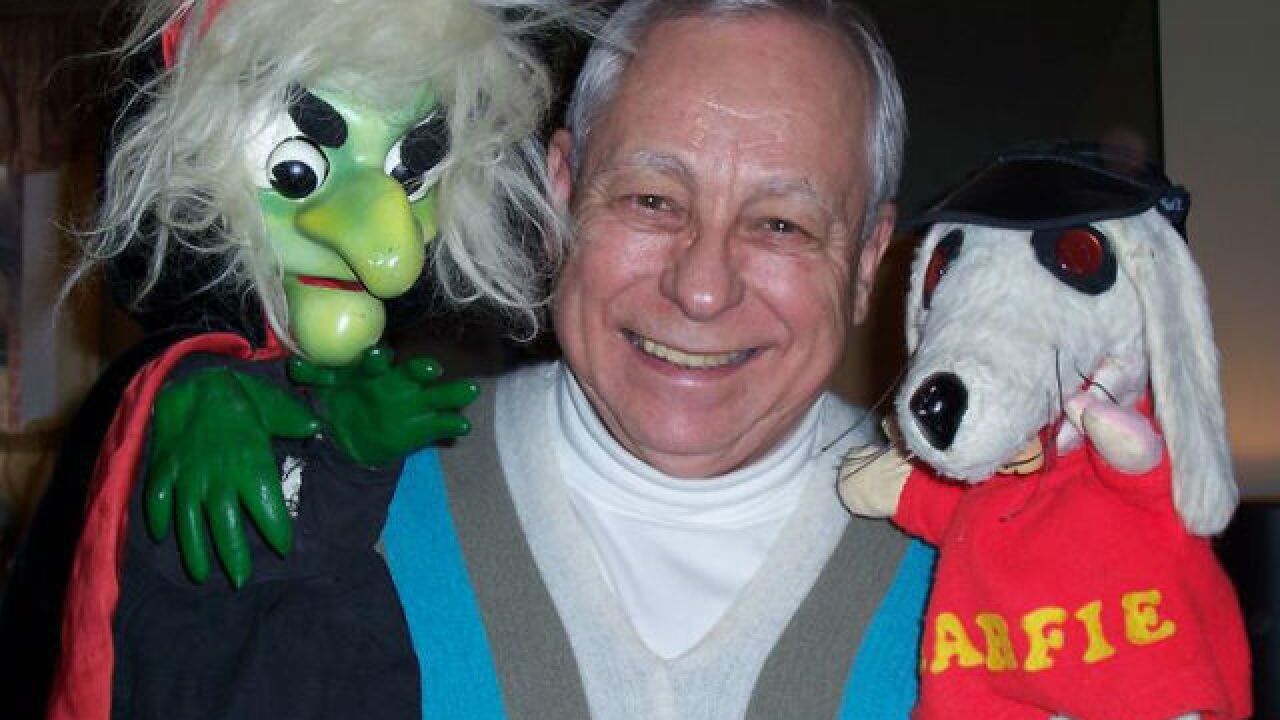 JOHN KIESEWETTER | WVXU
<p>Larry Smith with Hattie the Witch and Snarfie the Dog in 2008.</p>

CINCINNATI - A puppeteer who entertained Tri-State kids on WCPO and other TV stations for six decades died this week.

Larry Smith was familiar to generations as the voice, character and creator of Hattie the Witch, Rudy the Rooster, Teaser the Mouse, Snarfie R. Dog and others. He worked with the legendary Uncle Al on WCPO in the 1950s and 60s and had his own shows on WCPO and other stations from 1957 until he retired in 2006.

Smith was one of a dozen local entertainers who had live TV shows in the mid-20th century. Other kid show hosts included Skipper Ryle and The Cool Ghoul. Smith was the last of the breed.

During his career, Smith did more than 6,000 hours of live TV, according to Boston puppeteer Wayne Martin, a protégé, collaborator and friend who eulogized Smith on his Facebook page this week.

“Apart from my mother and father, nobody has had a bigger influence on my life than Larry Smith. I was three years old watching a Cincinnati, Ohio based television program called The Uncle Al Show when I first saw Larry's hand-puppet character Hattie the Witch grab Uncle Al's hat from his head and fly off. The puppet mesmerized me and my life was changed forever,”  Martin wrote.

Smith was just a teenager when he came to Cincinnati in 1957 to work on the weekday morning "Uncle Al Show," where he handled all the puppets, according to Martin. Smith also got his own one-hour daily live show, “Puppet Time Morning.”  He built all of his own puppets with the help of a neighbor, Martin said.

Not only was Smith’s show a hit, he helped raise the popularity of the Uncle Al Show on WCPO, which had an unprecedented run from 1950 to 1985.

In 1960, Smith went to New York to work on the  Broadway show, “Kukla, Burr and Ollie.” The show was short-lived, and Smith returned to Cincinnati, first at WKRC, then back at WCPO, where he rejoined Uncle Al and had his own afternoon show, “The Comedy Hour,” on Mondays through Fridays.

Smith also developed weekly primetime puppet show for adults called “The Contemporaries” that ran for two seasons (1962-1963), according to Martin.

Smith left WCPO in 1964 and went on to work WLWT, WCET and WXIX.

In 1968, WXIX premiered “The Larry Smith Puppets” show, which became such a hit that sports celebrities such as Johnny Bench and Pete Rose and music and TV stars including David Cassidy, Bobby Sherman and Tiny Tim made appearances, according to Martin.

When children’s programs started to disappear from local TV, Smith did a series called  “The Magic Forest” on Northern Kentucky's Storer Cable and a year-long Sunday morning radio program called “The Great Kids Show” on WGGR.

All the while, Smith continued doing commercials and making personal appearances with his puppets and contributing countless hours promoting the Muscular Dystrophy Association.

At age 63, Smith did his final television series on WBQC in 2001. That made Smith the only TV personality to have had a show on every station in town, according to Martin.

Smith donated some of his TV puppets to Cincinnati's Media Heritage Museum at the National Voice of America Museum of Broadcasting in West Chester, Martin said

The public is invited to see them and hear Martin talk about Smith in a special hour-long program entitled "Larry Smith and His Puppets" on Saturday, March 3 at 7:30 p.m. at 8070 Tylersville Road, Suite B.

The hour-long event will include a tour of the new Larry Smith Puppets Exhibit. Admission is $10 for adults, $5 for children.

Earlier in the day, a 3 p.m. memorial service will be held at Bolton & Lunsford Funeral Home, 3042 Harrison Ave., Westwood. Visitation begins at 1 p.m.