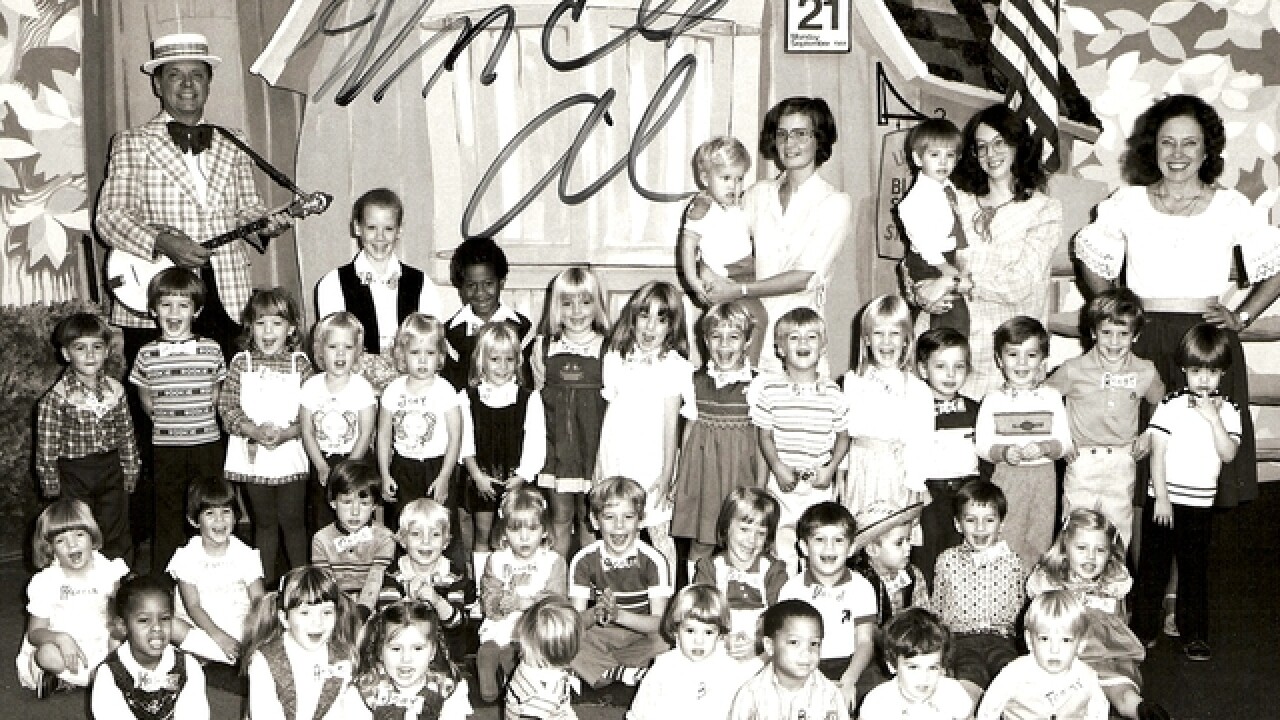 There are certain things that are just so Classic Cincinnati -- from holiday traditions to food to celebrations. As a Tri-State native, entertainment reporter Brian Mains loves either remembering or learning about them. That's why he decided to write a monthly column celebrating the Queen City's unique heritage.

Lewis broadcast his live show daily from WCPO Channel 9 studio from 1950 to 1985, amusing young guests with his accordion, his sidekick Capt. Windy, played by wife Wanda, and an array of colorful characters.

Those children, now all grown up, have not forgotten their time on “The Uncle Al Show.” In response to a query on WCPO.com, dozens of people submitted stories and photos of their own experiences on the show.

Worth a Thousand Words

Many said they had kept the glossy 8x11" group photographs they received after studio visits. People shared memories such as riding the birthday merry-go-round, eating “Mama’s cookies,” drinking Barq's soda during commercial breaks and, in the case of Michele Myers Beuerlein, meeting her husband decades before they married.

In the recording below, Beuerlein shares how she and her husband, Scott, realized while dating in their 20s that they had appeared together as children on the same episode of "The Uncle Al Show." The Beuerleins, who live in Anderson Township, celebrated 32 years of marriage last year.

Other people recalled just how excited they were as children to be on television.

“I absolutely loved going to ‘The Uncle Al Show,’” wrote Myndee Griffin of Lebanon, Ohio. She appeared on the show in 1981. “I remember getting to drive a little cardboard car to a gas station and saying ‘Fill 'er up!' I also lied and said it was my fifth birthday so I could ride the birthday merry-go-round with Lucky the Clown.”

Lisa Gotham of Bridgetown, Ohio, remembered dressing up as a Kahn's hot dog and running around the studio as an in-show advertisement, a typical practice during TV's early days. She and her brother, Robert Neely, appeared on air multiple times in the 1960s.

Others were too young to remember visiting Uncle Al, but their photos became part of family lore nonetheless. WCPO cartoonist Kevin Necessary shared this photo of himself appearing on the show at 2 years old.

It Was a Small, Wonderful World

When "The Uncle Al Show" broadcast for the last time on May 28, 1985, after 14,000 episodes, it was one of the longest-running children shows in the country. Television was changing, though. Cable networks were coming into their own, syndicated cartoons were dominating morning lineups and live local programming, aside from the news, was disappearing.

Musician Dave McMahan saw that decline firsthand. The station hired a young McMahan in 1978 to replace Uncle Al's organist after she retired. He was then let go in 1984 as part of cost-saving measures.

McMahan said he bore no ill will at the time and had fond memories of working with children and cast members.

“It was exciting,” said McMahan. "That’s the best word I can think of. And surprising, because you never knew what was going to happen.”

Beyond providing live accompaniments for pieces such as the "Hokey Pokey," "It's a Happy Day" and the show-ending “It’s a Small World,” McMahan warmed up the crowd each morning before the show began. He would pick two parents to help corral the children in the studio. But the kids still found ways to surprise Uncle Al and the cast as cameras rolled.

“One time, we picked a little boy to re-enact ‘Jack jumped over the candlestick,'” McMahan recalled. “As the boy approached this little candlestick he was supposed to jump over, he just freaked out and ran the other way. We had no choice but to keep going.”

There were also regular issues involving the show's green screen.

He described "Capt. Windy," aka Wanda Lewis, who still lives near Hillsboro, Ohio, as "a sweetheart of a lady."

"And Al was an interesting guy," he said. "He was a really, really good accordion player. We would have a blast before and after the show. It was a great five or six years, unbelievably fun to go in there every day.”

McMahan, of Loveland, now plays in jazz ensembles and works with his wife, Dr. Lisa McMahan, at the Paws veterinarian hospital in Symmes Township.

In 2004, the National Academy of Television Arts and Sciences inducted Lewis and his wife into its "Silver Circle" Hall of Fame for their work. Lewis died on Feb. 28, 2009, in Hillsboro, at the age of 84.

Linda Smith Mason, with the Mason Marionettes & Puppet Co., appeared on an episode in the mid-1960s. She also attended Lewis' funeral service.

"Everyone in attendance did the 'Hokey Pokey' just as many of us had done on his show all so many years ago," said Smith Mason, who lives in Anderson Township.