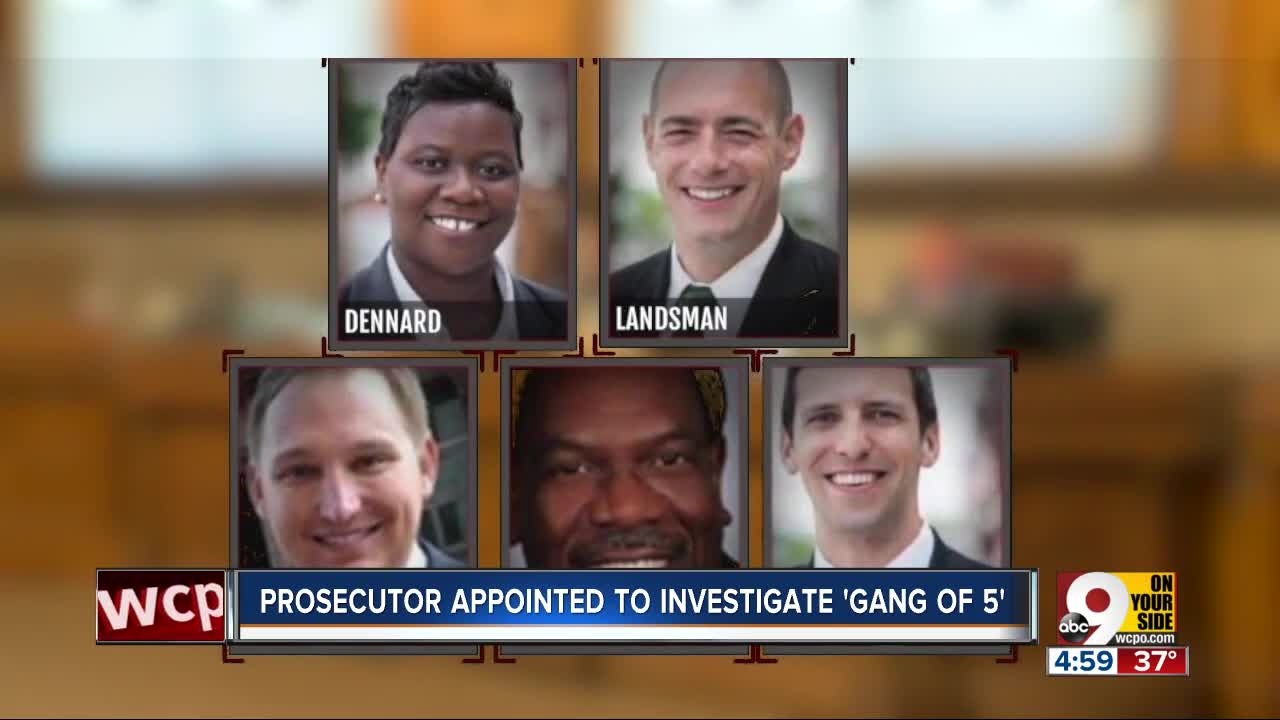 A special prosecutor will consider filing criminal charges against the City Council “Gang of Five," county prosecutor Joe Deters announced Thursday. Deters said Ohio Auditor Keith Faber made a referral for criminal prosecution on a misdemeanor charge of dereliction of duty against the five Democrats. Faber's referral followed an investigation during an annual state audit.

Deters said Ohio Auditor Keith Faber made a referral for criminal prosecution on a misdemeanor charge of dereliction of duty against the five Democrats. Faber's referral followed an investigation during an annual state audit.

Deters announced that Judge Charles Kubicki appointed Pat Hanley, a former U.S. attorney, to be special prosecutor in the case.

It's possible that Hanley could decide not to file charges or file additional charges based on his investigation, Deters said.

Deters said it will be entirely up to Hanley to decide whether to call a grand jury, and he had no timetable for Hanley's investigation.

WCPO reached out to the five council members for comment. As of 11 p.m., none had responded or even tweeted about the day's developments.

The five made the admission in settling a lawsuit by local government watchdog Mark Miller, treasurer of the Coalition Opposed to Additional Spending and Taxes (COAST). Miller’s attorney, Brian Shrive, said he filed the suit after the five Democrats skipped a special public council meeting regarding the firing of then City Manager Harry Black and instead created a response strategy through secret texts and emails.

Deters said Thursday that he consulted with Mayor John Cranley and City Solicitor Paula Muething and all agreed to petition the county common pleas court to appoint a special prosecutor because of a potential conflict of interest.

"Some people will say this is political, but it's not," Deters, a Republican, said at a news conference. "Once the state auditor made a referral, I had to do something."

The auditor's referral constitutes a request to Deters to "consider prosecution" in this case, according to Deters' news release, but Deters said he believes the five broke the law.

"I think they clearly violated the Sunshine Law," Deters said Thursday. "What they did was dumb, arrogant."

In his referral, Faber, also a Republican, said the five "recklessly did an act expressly forbidden by law ... to wit: took official action and conducted deliberations upon official business by a majority of the body outside of the requirements of the City of Cincinnati charter and the [Ohio] Open Meetings Act."

As a result of the lawsuit, the city released 626 pages of text messages between the five council members revealing gossip, name-calling, rumors of extramarital affairs, high-school level backstabbing and the secret side to how City Hall business gets done. Three weeks later, the city released 366 more pages.

When the city settled the lawsuit - at the expense of $177,000 to taxpayers, the five council members drew a public reprimand from Republican Judge Robert Ruehlman during a court hearing to approve the settlement.

"They should resign and pay it back ... no city voter should ever vote for them again,” Ruehlman said.

Ruehlman’s comment set off an angry exchange of criticism and condemnation between the council members and local Democrats, who accused Ruehlman of playing politics, and local Republicans and the attorney who filed the lawsuit.

The council members refused to resign, but each agreed to pay back $200, calling it their share of the $1,000 fine against the city included in the settlement.

A week later, Faber said his office would investigate the actions of the five council members during his normal financial audit of the city.

Following the settlement, Shrive said the lawsuit served its purpose.

"The point of this lawsuit from the get-go was to make sure that the people of Cincinnati knew what their government was doing," Shrive said.