From Peter Clark to Rodger Horton, black educators are still rare. And that needs to change. 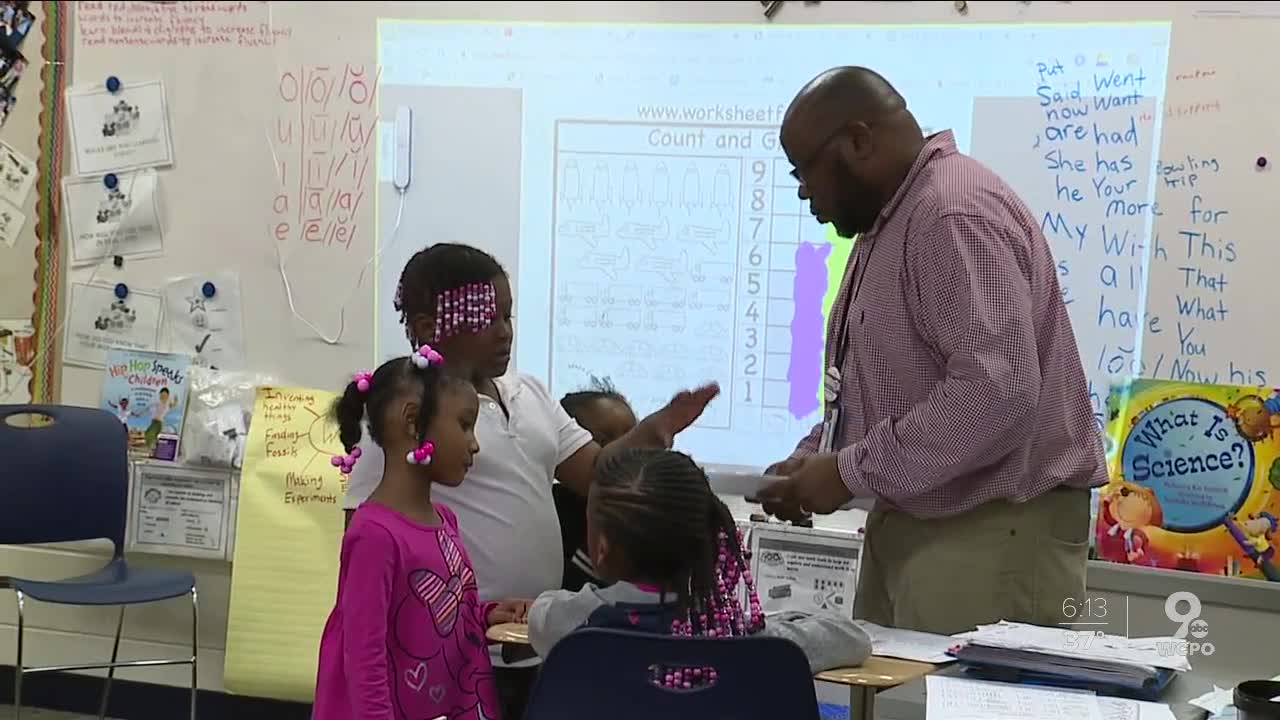 "None of my teachers until my third grade looked like me, walked like me, or talked like me," said Rodger Horton, a kindergarten teacher at Chase Elementary. He grew up with dreams of becoming a police officer, but that changed in college at Central State University in Xenia. He credited mentors in his education for the turning point.

CINCINNATI — "None of my teachers until my third grade looked like me, walked like me, or talked like me," said Rodger Horton, a kindergarten teacher at Chase Elementary.

He grew up with dreams of becoming a police officer, but that changed in college at Central State University in Xenia. He credited mentors in his education for the turning point.

"[Recruiters] all wanted to speak with me," he said. "Because there were so few African Americans in the early 2000s, particularly males, that were looking to go into education, particularly elementary education, everyone wanted to sit down with me."

Before Peter H. Clark became the first teacher in the new Cincinnati Independent Colored School District in the mid-1800s, black children didn't have many educators who looked like them.

And they still don't.

In Ohio, non-white teachers made up 5.64 percent of the workforce in the 2018-19 school year. Students of color, meanwhile, represented 31 percent of pupils.

Kentucky's demographics were similar. Just 4.8 percent of the Commonwealth's teachers were non-white, while 24.2 percent of students were something other than white.

New research has shown that changing that gap brought dropout rates and disciplinary problems down while raising test scores and positive views of education.

Which brings us back to Horton.

He has taught at Chase in Northside for 16 years -- 10 of those years he's taught kindergarten.

On a recent Tuesday, Horton wrangled more than one dozen students with the help of a paraprofessional aide. He asked them what 'data' is and how it's used. Students counted rockets, cars and buses. One by one, they graphed those numbers on a smartboard at the front of the room.

The other adults in the room, like this reporter, wondered when kindergarten got so advanced.

It was a big change for Horton, too.

In August 2019, researchers from the University of Phoenix Center for Workplace Diversity and Inclusion Research partnered with the National Network of State Teachers of the Year to examine the issues around diverse classrooms - particularly the experience of black male teachers.

Citing a 2016 report, researchers said students of color made up more than half of students in pre-school through 12th grade classrooms.

"We must continue to champion efforts to create sustainable actions to diversify the teaching profession and improve recruitment and retention effort," said Dr. Kimberly Underwood, University of Phoenix research chair.

Underwood, the lead author on the report, said the stories and findings "served as the 'coal miner's canary.'"

Listening to it sing

When WCPO reached out to the Ohio Department of Education about the report and statewide demographics, a spokesperson also sent the department's current strategic plan.

In 'Each Child Our Future', the State Board of Education and its partners list increasing the supply of teachers as its first strategy. That includes increasing diversity.

"Changing state demographics mean that children and families bring greater cultural diversity into the classroom," they wrote. "As a result, more children need personalized learning and differentiated instruction that is culturally relevant. Ultimately, teachers need school leaders who understand how to create and sustain an environment where all students—and all caring, committed adults—grow and learn."

Recruitment, according to the state, will be a major component of increasing diversity.

Remember how opportunity helped push Rodger Horton to elementary education as a career.

One of the major drivers mentioned in the University of Phoenix report is student engagement as a way to reach future educators of color.

Back at Chase Elementary, the dismissal bell rang.

But the day was not over for Horton and several older students. Horton is the school leader for Cincinnati Public Schools' M.O.R.E. program. It stands for Men, Organized, Respectful, Educated.

"It lets them know there's someone who cares for them," Horton said. "It's almost from the perspective that I'm a pseudo-father."

M.O.R.E. was not designed with the goal of creating future educators. It's built - and gained national recognition - for better preparing young men of color for college and life outside classroom walls.

"We never give up on each other," said Alonzo Berry, a third year M.O.R.E. student. "We help each other and we help others."

There's no denying, though, the power of representation in a classroom. Horton remembered how that third grade year changed him and his perspective on school, all because he had a teacher who looked like him and took the time to care.

"It allowed me to realize the potential that I had to learn at the same level and same pace as my peers," he said. "It opened up my world so much more ... instead of being ostracized, I was just unique and I excelled in the classroom."

Upperclassmen at Clark Montessori School in Hyde Park decided that this Black History Month, they would learn about the man whose name they see and say every day.

"I never really knew that he was an African American male," said senior Prahya Henderson. "That really puts some significance onto our school."

Clark was born in 1829 and became not only a teacher, but a principal and superintendent. Clark was also an outspoken abolitionist, conductor on the Underground Railroad, and published a weekly newspaper. He was the first black member of the Mercantile Library and was part of Ohio Conventions of Colored Men, according to the students' research.

"It was shocking to us to learn about him, considering our school is named after him and how much he did, not only in education but also the world," said senior Grace Haucke.

The students who spoke to WCPO were in an African American history class. They also said they noticed the lack of teachers of color.

Henderson said she started in a private school, which had all African American teachers.

"To go from having all African American teachers to all Caucasian teachers was kind of a change that I had to adjust to," she said.

Haucke noted that she hadn't learned much African American history until this year.

"So that's why we took the initiative to learn about him and research and talk to [WCPO] news," she said.

And who knows? Maybe there's another Peter Clark - or Rodger Horton - in one of those classes.