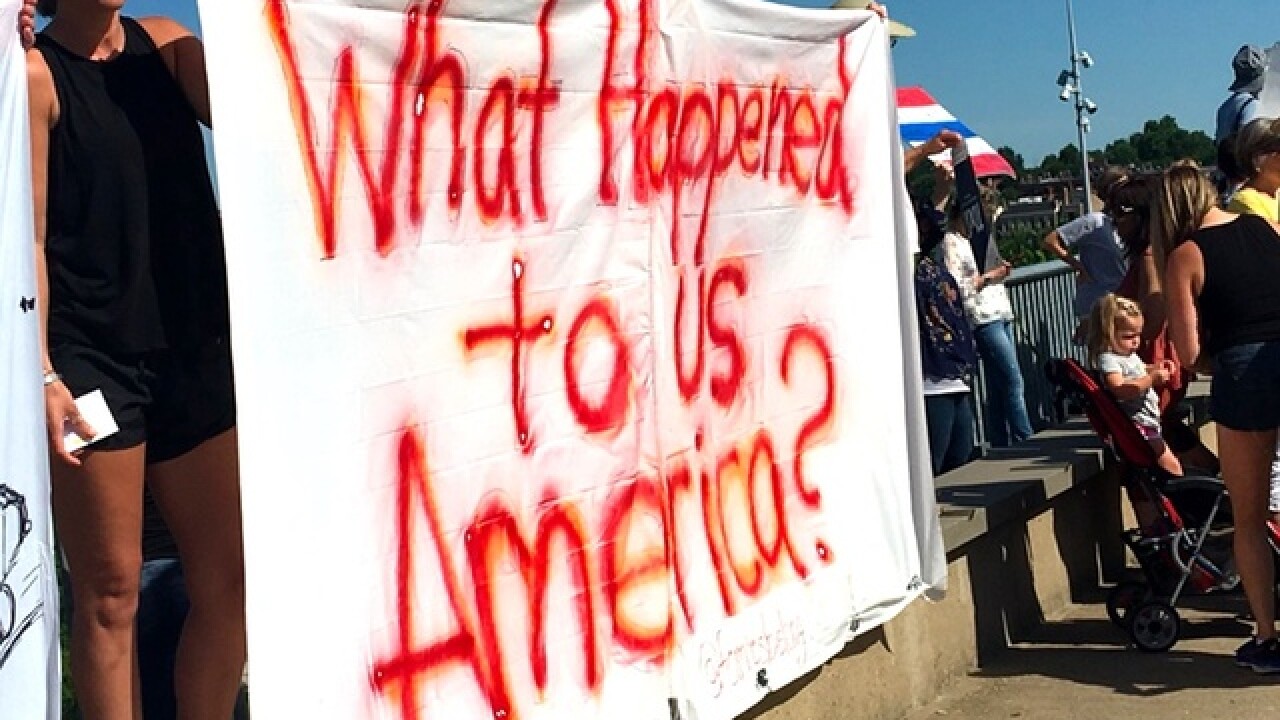 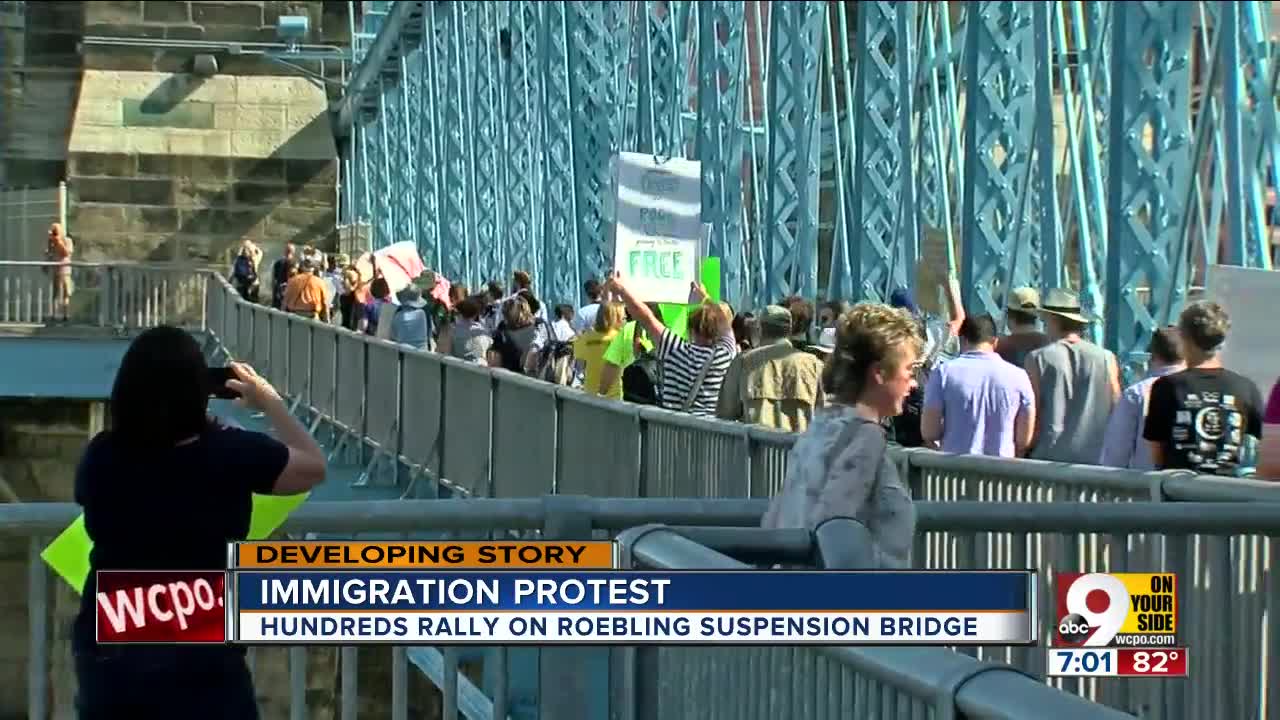 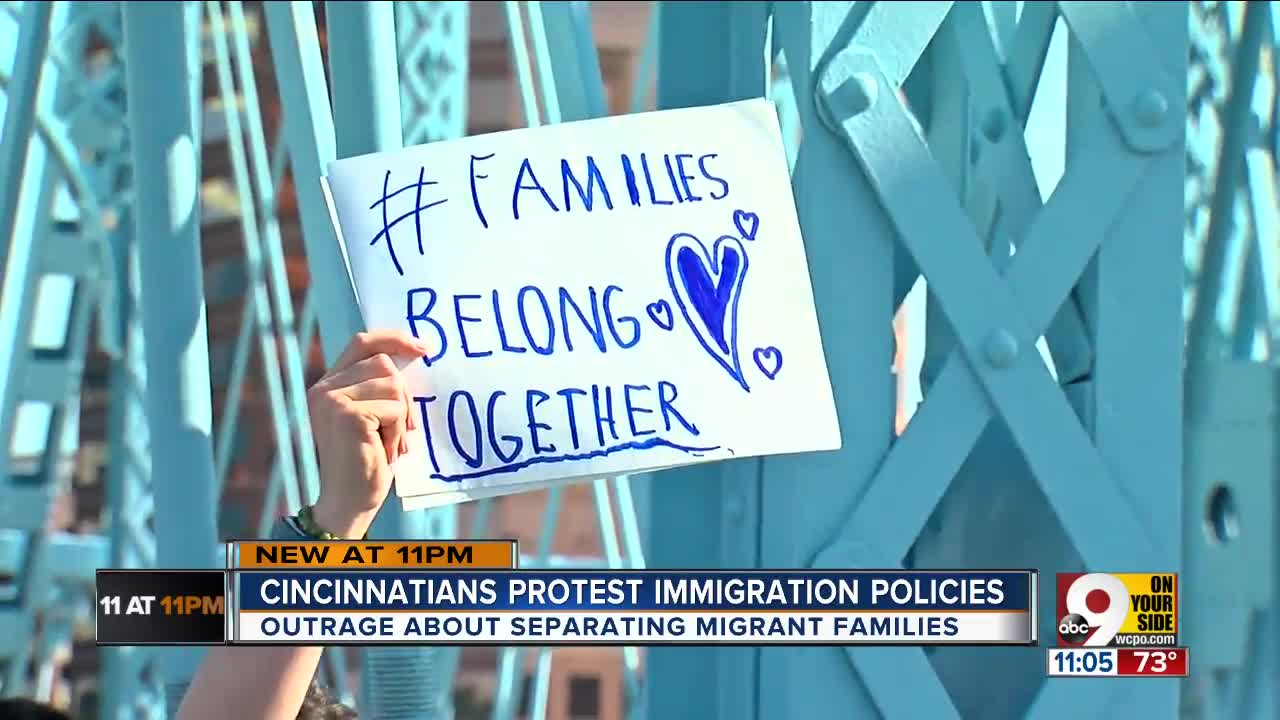 CINCINNATI -- Hundreds of protesters from both sides of the Ohio River gathered Thursday afternoon on the Roebling Bridge to share their outrage over stories of family separation emerging from a controversial Trump administration immigration policy.

The Trump administration's recently implemented "zero tolerance" immigration policy, which refers all adults who illegally enter the United States for prosecution regardless of their reason for entry, has resulted in more than 650 migrant children being separated from their parents and placed indefinitely in government-run shelters.

Hundreds of people are on the Roebling Bridge for the “Families Belong Together” rally. Cincinnati joins other protests across the country over a new immigration policy. The zero tolerance policy has separated hundreds of immigrant parents & children at the Southern border @WCPO pic.twitter.com/bPjYqRu3dX

The stories emerging from its implementation are vivid -- a mother who claimed her baby was taken while she breastfed; asylum seekers fleeing gang violence and abuse being separated from their children; boys housed in a former Walmart receiving only two hours of outdoor time each day -- and have prompted rebuke from organizations including the United Nations human rights office and the American Civil Liberties Union.

"I know my kids are very upset when they don't know where I am at for 10 minutes, let alone for days on end -- weeks -- months," protester Heather Canner said. "We don't know where these people are coming from. The point of the United States is to be the beacon of light, of hope, we should have a little more empathy."

United States Attorney General Jeff Sessions, who enacted the policy and recently disqualified many asylum seekers from receiving protected status in the United States, argued in a June 5 interview that the policy was an effective deterrent for others considering illegal immigration and that migrants should "expect" to be separated from their families.

"It's legitimate to warn people who come to the country unlawfully, bringing children with them, that they can't expert that they'll always be kept together," he told conservative radio host Hugh Hewitt.

Klungle said she and other protesters don't buy it. Regardless of politics, she said, dividing families in this way is cruel.

"No parent would want any child to be treated that way," she said. "Even if you aren't a parent, you don't treat children that way. You don't treat human beings that way."

The new policy has resulted in such a swell of children being directed to government-run shelters that at least one new facility will be opened in response.

"Somebody has got to end it," West Chester resident Cathi Bridges said. "I will give my life to end it. I feel that strongly about it. I am so mad."