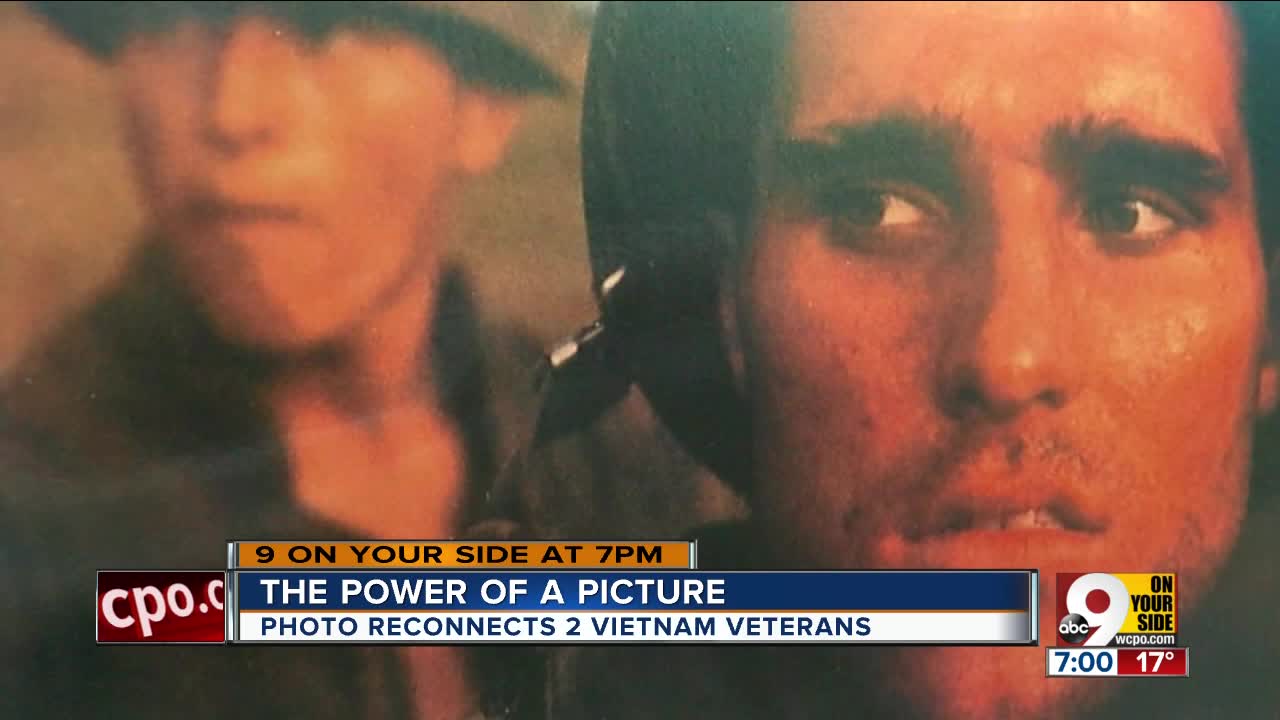 WCPO Anchor Kristyn Hartman wasn't the only person who recognized her father's face at the end of Ken Burns' documentary, "The Vietnam War." Paul Cartwright did too, and quickly started sobbing. "Oh my God. Oh my God. That was the man who saved my life," Paul told his wife. Paul only remembered his hero's nickname, "Ski." But that started Debbie Cartwright on an improbable search to find him and bring their pasts together again. 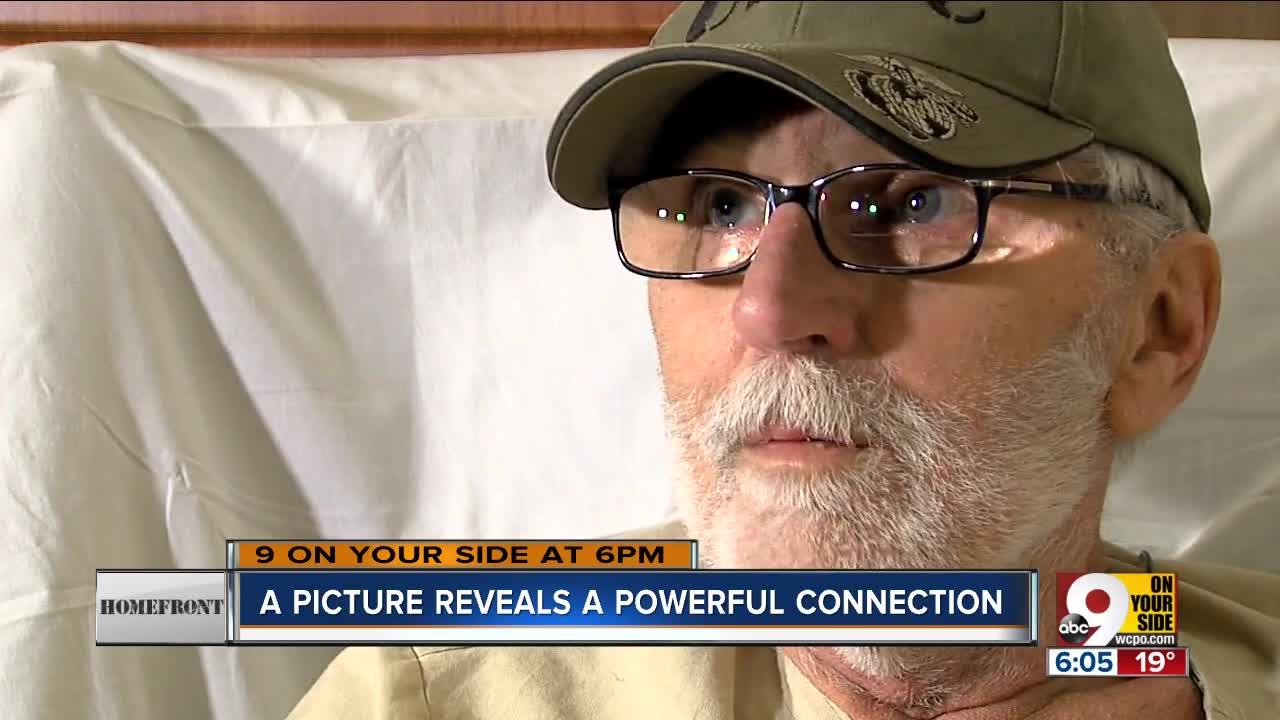 By: Kristyn Hartman
Posted at 7:39 AM, Mar 04, 2019
Listen in the podcast player above: Homefront host Craig McKee sat down with Kristyn Hartman to talk the rediscovery of her father's past.

But I’ve learned, at least with a certain story, it can.

In 2017, I was watching Lynn Novick and Ken Burns' “The Vietnam War." They ended their documentary series — a decade of work — with a photo that wartime photographer Larry Burrows took. My father, Hank Januchowski, remembers the day Burrows took that photo well.

He remembers because he was the subject.

Seeing how the filmmakers used the picture in such a poignant way put me on a mission to understand why they chose it. And it made me determined to find out more about my dad’s Vietnam service.

My dad, a Marine Corps veteran, opened up about his experience for the first time that day. It was the realization of the documentarian’s hope: That the series would prompt conversations that perhaps hadn’t happened because Vietnam veterans didn’t receive the warm welcome home they so deserved.

Just as the use of my dad’s picture put me on a mission, it also set in motion an entirely separate mission with a woman who lives outside of Detroit. One evening in 2017, Debbie Cartwright's husband called her into the living room.

“And he was very distressed, and I thought something was wrong, and I ran in, and he had his hand over his mouth, and he was just sobbing,” she said.

Debbie's husband, Paul, paused what he was watching. There was a picture of a Marine on the screen.

Debbie asked Paul what he remembered about the man in the picture.

He told her he only knew his nickname was “Ski.”

He said he thought “Ski” was from Chicago. And he never swore.

Debbie asked Paul if he wanted her to find “Ski.” He told her he didn’t think it would be a good idea because “some people don’t want to be found or reminded.”

Flash forward more than a year.

Paul’s health took a turn. He was in the VA Hospital in Ann Arbor, Michigan. Debbie wanted to do something to cheer him up. She decided it was time to find the man in the picture.

“I just Googled it," John Schmitz said. "Typed in ‘Vietnam vet from America with the nickname ‘Ski,’' and there was that picture that Paul froze on his TV.”

It was the thumbnail image on the web version of my story from 2017. It came with station information and my name. So Debbie picked up the phone and called me.

“I’ve been trying to locate your father,” she said in a voicemail.

Subsequent conversations put photographer Ryan Heeter and I on a path to meet the Cartwrights.

He told me the same things about my father he told Debbie – including my dad’s language choices.

He could only be talking about my father.

The conversation with Paul was a portal to the past. He described the young Hank.

Paul got emotional when he spoke about Jan. 6, 1967, the day he earned a Purple Heart. He was shot in the arm, the shoulder and the chest, he said.

I asked Paul: If my father had not been there in that moment in 1967 if Paul would still be here today.

“No,” Paul said. “Because the enemy was too damn — I mean darn — close. He already had a bead on me. He was getting ready to squeeze (the trigger) again, when your Dad leveled him. Literally, he started with 100 rounds at his feet, and didn’t let up ‘til he was done with his head. Now I don’t know if he’ll remember that or not, but I do.”

Turns out my dad doesn’t remember it. I took parts of Paul’s interview to Chicago to show dad.

“So many years ago," my dad said. "Everything seems to fade."

He asked me to call one of his Vietnam buddies with whom he’s kept in touch. Rick Barnes remembered Paul. He even sent me a picture of their group on Christmas Day in 1966. He, my father and Paul were in the picture. It was taken days before Paul was shot.

“It brings back memories,” my father said. “Good memories in some ways. In some ways not. I’ve thought about Vietnam many times over. It wasn’t a pleasant place. There’s beauty out there, but also things you want to remember and a lot of things you don’t want to remember. War is hell. No doubt about it.”

Which brings us back to the reality of their Vietnam situation. It was kill or be killed. That was the case when my dad stepped in to help Paul.

The gravity of combat weighs on the heart and the mind. There was so much death in Vietnam, but Paul’s story is about life. He said my dad’s intervention made it possible for him to live, and be a husband, a father, a son, a brother, a cousin, a friend.

With a big smile, Hank said, “I don’t know if it’s because of me, but it makes me feel great.”

“I owe him more than he can ever imagine," Paul said tearfully. "I guess that says it all.”

The gift of this story, for me: I have an even bigger family now.

You can see this story Monday night on 9 On Your Side at 7. You’ll hear from Paul’s oldest child, Amy, and from his cousin, Archie.