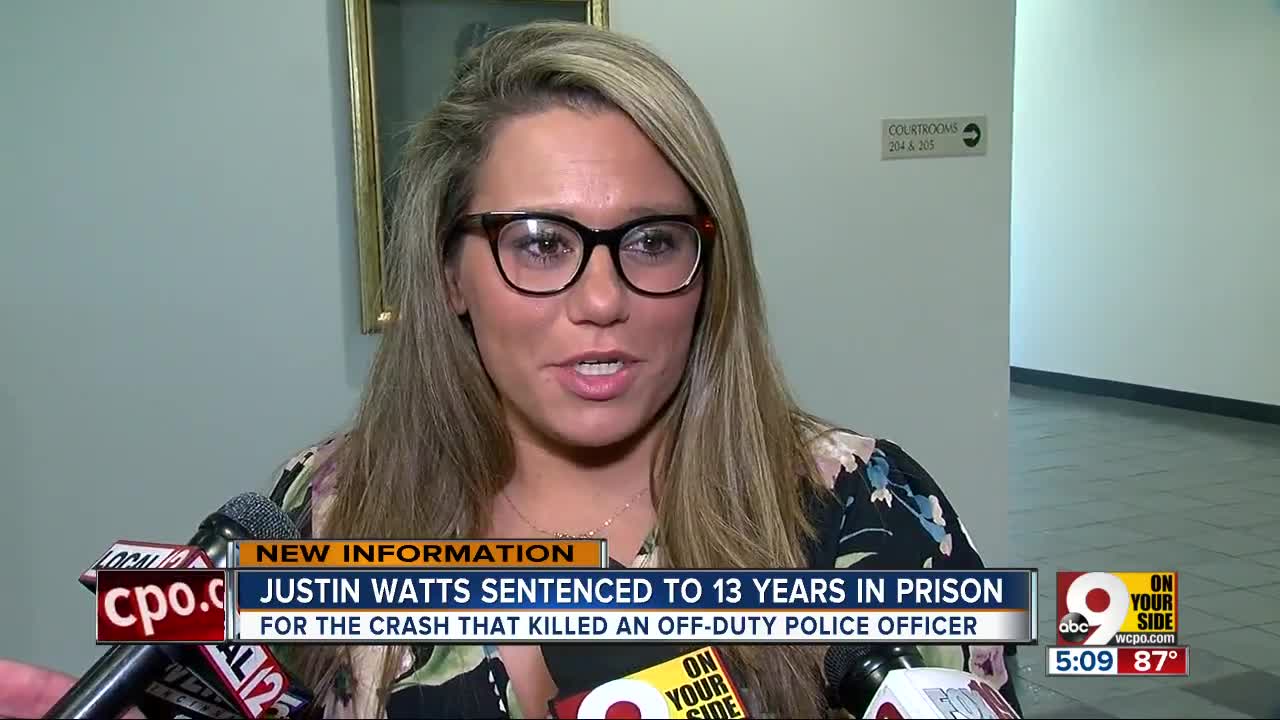 Judge Jerry McBride sentenced Justin M. Watts, 31, to 13 years in prison for killing 27-year-old Jerrid M. Lee in a crash in January on State Route 125 in Amelia. He was sentenced to 11 years for the crash and an additional two years for probation violation. Lee is survived by his wife, Katie Lee, and two young children. 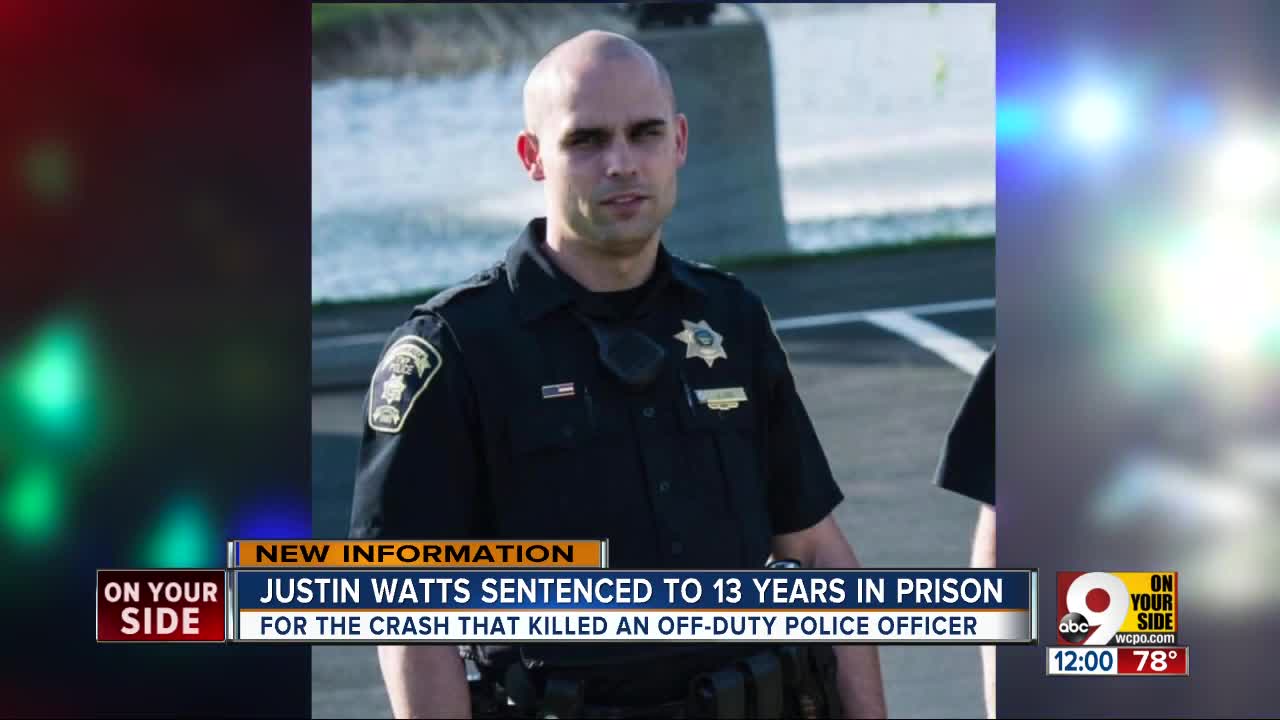 CLERMONT COUNTY, Ohio -- A judge on Monday handed down the maximum sentence for a drugged driver who killed an off-duty police officer in a crash.

Judge Jerry McBride sentenced Justin M. Watts, 31, to 13 years in prison for killing 27-year-old Jerrid M. Lee in a crash in January on State Route 125 in Amelia. He was sentenced to 11 years for the crash and an additional two years for probation violation. Lee is survived by his wife, Katie Lee, and two young children.

Katie Lee read a statement in court. She said the last thing she heard her husband say was promising their son he’d play with him in the morning.

“As he was walking out of the door, our son Bentley was chasing him saying, 'Daddy please just stay home and play with me,’” Katie Lee said. “Jerrid was standing in the doorway of our house and said, ‘Buddy, daddy has to go to work, but I promise we will play as soon as you wake up in the morning.’"

"It's my fault, I made a stupid decision, your honor,” Watts said. “I apologize to you guys, really, and I'm sorry that I hurt so many people because of my careless actions."

McBride said he believes Watts is remorseful for his actions, but he said punishment was paramount in this case, which is why he handed down the maximum sentence.

"You're going to get out of prison when you are 45 years old, 45 years old is fairly young,” McBride said. “You're not losing your life. Mr. Lee lost his life."

Katie Lee said she was happy Watts was prosecuted to the fullest extent of the law.

"Nothing is going to bring Jerrid back, but I'm really thankful that he got as much as he possibly could have for justice for Jerrid, for justice for my family and safety for everybody,” she said.

On the night of January 28, 2019, Jerrid woke up early for work as usual so we could put our two kids to bed together. We routinely laid in bed with each of them between 7:00pm-7:30pm reading bedtime stories and singing lullabies until they fell asleep. For some reason, on that Monday afternoon, Jerrid did not want to make the kids go to sleep at their normal bedtime. He wanted to play with them until he left for work. Around 8pm he kissed me and our children goodnight and left to work out on his way to work. As he was walking out of the door our son, Bentley, was chasing him saying, “Daddy please stay home and play with me.” Jerrid, standing in the doorway of our house, said, “Buddy, daddy has to go to work, but I promise we will play as soon as you wake up in the morning.” These were the last words I ever heard my husband speak. Around 9pm I had finally gotten the kids to sleep and realized I hadn’t heard from Jerrid when he got to the gym which was abnormal. So, I texted him and asked if he had made it to the gym. When I didn’t hear back from him and I did get a “read receipt” indicating he did not read my message I began to worry. I looked at the location on his phone and saw that he had never made it to the gym. At this time, I became very worried. I texted him again and said, “I am really worried about you, please let me know you’re OK” When he did not open this text I knew something was wrong, so I called my sister-in-law and told her. At that point her and my brother went to the location that was showing on his phone. When I did not hear from them, my worry turned into nausea and panic. About one hour later, there were two OSP at my door to announce my husband’s death. This was by far, the worst night of my life. I still to this day have a lingering numbness that I don’t thing will ever go away.

The next day I had to look my 4-year-old in the eye and tell her that her daddy will never be coming home. She hid under our dining room table, sobbing, and asking, “Is it because we did not love him enough?” “Why couldn’t the doctor’s fix him?” “Can we try to fix him?” “Maybe we can make him into a robot and that will bring him back.” Trying to explain death to a 3-year-old, 5 days before her 4th birthday was the hardest thing I have ever had to do. We were supposed to be leaving the following week for Walt Disney World. My daughter was so excited. Her and her dad talked about it daily. We had matching shirts made, and lots of Minnie ears purchased. Instead we stayed home, planned a funeral, and mourned the death of my husband and her dad.

Jerrid and Annabelle were the best of friends. We took her in as a foster placement at 1 day old. Jerrid was in Saudi Arabia at the time, fighting for our Country and the War on Terrorism. They face timed daily. When he came home from his military deployment, she was 6 months old and it was the start of an incredible bond. At 18months old we officially adopted her. Today is our 3-year adoption anniversary (July 8th).

I see her mind at work with this every day. Multiple times a day she will just be starring off, silent. When we ask what is wrong, she responds with things such as, “I miss my daddy.” “Are you sure my daddy isn’t coming back?” “Do you still have his phone number, can we just try to call him, please?” She builds him block castles, one of their former favorite playtime activities, and places them next to his urn. For Valentine’s Day she made him a valentine and left it with his urn “In case he comes back.” She frequently cries, grabs her heart, points at the sky, and says she knows where her daddy is.

Our youngest, Bentley, is also a foster child we were adopting. We got to the hospital when he was 8 hours old. He was born addicted to meth and heroin. We had a very long road the first year of life with him, but Jerrid was so proud of all our little guy had overcome. He was so excited to teach him to shoot a gun and to coach his football team.

Jerrid had overcome a lot in life. The details I will spare for his privacy, but he made so much out of his life in his short 27 years here on earth. He served the USAF in the security forces for 6 years. Deployed two times overseas, in support of Operation Enduring Freedom and Operation Iraqi Freedom. Was awarded airman of the quarter multiple times. Reached the level of staff sergeant. Simultaneously he earned his associates degree in criminal justice as well as completed Sinclair’s Police Academy. While still being active duty in the Air Force he began working as a Police Officer at Clearcreek Township Police Department. During his time there he was very active and hyper-focused on preventing impaired driving and doing his best to keep the township safe. It is this irony that is so difficult for our family. Since Jerrid’s passing I have received hundreds of letters from fellow airmen he served our country with, other police officers he worked alongside, and even citizens of the township that he patrolled boasting about what an amazing man Jerrid was and how sorely he will be missed.

Jerrid was an absolutely amazing man, husband, father, son, uncle, Police Officer, war-veteran, and friend. He could never be replaced. All because of one very selfish decision of someone that has never positively contributed to society. Jerrid will never get to coach our son’s football team or teach our son to shoot a gun. He will not be there to celebrate the adoption of a little boy he fought so hard for.

He will not be there to teach our kids to ride a bike, drive a car, or to send them off to college. He won’t be there for career day or to take our daughter to the father daughter dance. Or to be there to help me fix her broken heart after her first breakup.

Our kids will never get to play with him, kiss him goodnight, or hear him read goodnight stories or sing them lullabies ever again. My father in law will never get to draft another fantasy football team or go golfing with his son again. My nephews won’t have their uncle to parade around at veteran’s day or to play video games with or to throw them around in the pool.

I no longer have my husband, or my best friend to walk through life with.

We will not get to see what other great accomplishment he would have achieved in life.

We won’t get to see his amazing smile or hear his goofy jokes ever again.

All of this and so much more is gone from us, and Jerrid, all because of one, life-long, repeated, selfish criminal that has made nothing except execrable choices and decisions. I hope that Justin Watts receives the maximum sentence possible and is forced to sit in a tiny cell and think about the great man he took from this world every single day, because I know I do.

No amount of jail time will replace any part of the man Jerrid was. However, for some justice for his life, and for safety of everyone else, please put this terrible man away for as long as constitutionally possible.