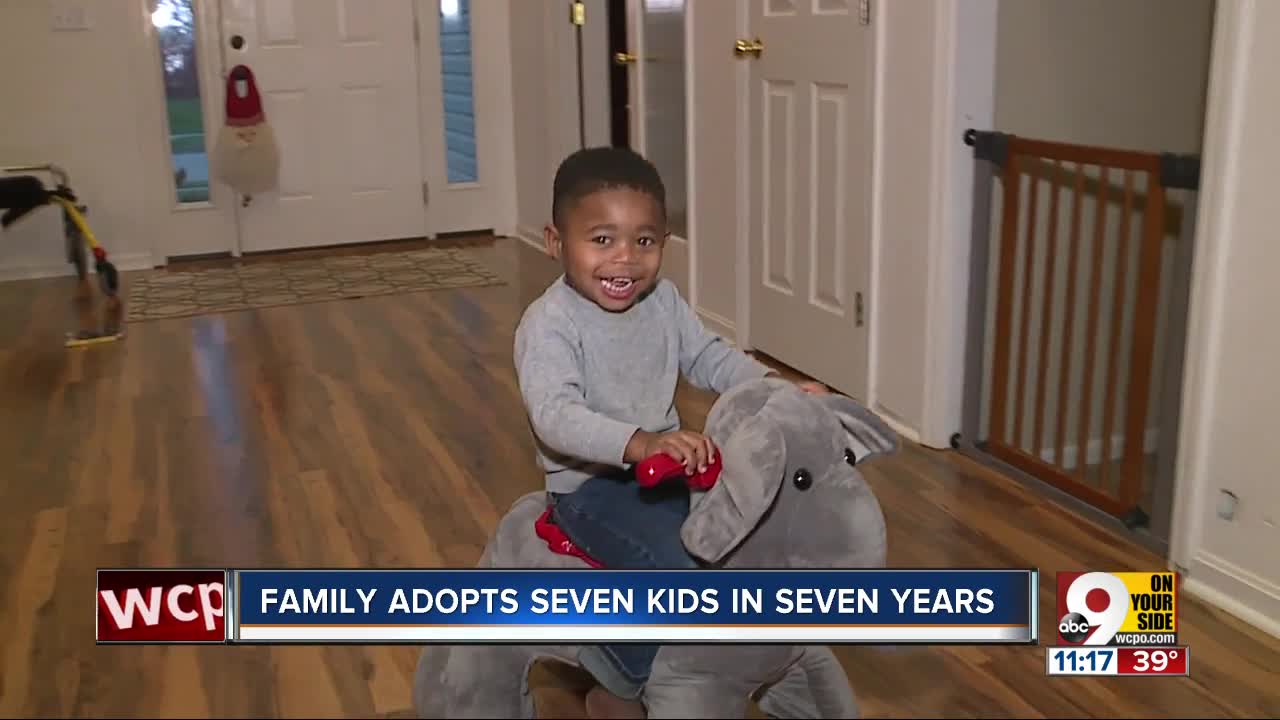 Life is different now than it used to be, Beth Lammers said Monday. She wouldn’t change it for anything.

BATAVIA, Ohio — Beth and Scott Lammers have adopted seven children in as many years, growing their household from a small nuclear family – father, mother and two biological children – to one that gets around in a 12-passenger van.

Life is different now than it used to be, Beth Lammers said Monday. She wouldn’t change it for anything.

“Love is messy,” she said. “I have to remember it, because my day is messy, and we are messy, and life is messy.”

She and her husband began welcoming more children into their home after Scott spotted a sign outside Beech Acres Parenting Center in 2012: “Foster parents needed.” Growing their family through adoption or fostering had always been part of their plan, but they hadn’t known how to make it happen.

Beech Acres helped them become licensed adoptive and foster parents. Nine months later, they were introduced to their family’s first new additions: A pair of brothers, Jake and Joe.

"We met them and it just felt right,” Beth said. “It felt like that moment that we said, ‘This must have been the reason we were meant to do this.’ They needed love and we had love to give.”

The couple’s desire to ensure siblings who enter the system together stay together is part of the reason their family has grown so rapidly, she added. Their next adoptees, Chris and Claire, were newborn twins with developmental disabilities. In 2018, when they learned Jake and Joe’s young brother Jayden needed a foster home, they adopted him, too.

In between came Nova, who had physical disabilities as a result of neglect, and Holden, who had microcephaly at birth.

Raising nine children would be a hard-to-handle responsibility for anyone under any circumstance. Caring for children with special medical needs adds extra challenges, Beth said – and sometimes stuns the people they know.

“I think a lot of people's eyes are very wide,” she said. “It's kind of like 'How do you manage to take care of all of this? How do you have enough to give to every child?'

That said, she thinks nine is enough for now. That could change if she learns any of their children have additional biological siblings, but she and Scott agree that they’ve reached something like capacity. They’ve developed routines that work; they’ve shaped their lifestyles around a gaggle of children with daily school, extracurriculars, doctor appointments and more.

“I feel like their hearts are deeper and more filled with love and more passion and more compassion because of it all,” she said of her children. “I think it's been a very helpful journey for them."

In Hamilton County, on any given night, 1,000 children are in need of homes. Anyone interested in adopting or fostering can reach out to their county’s job and family services department.