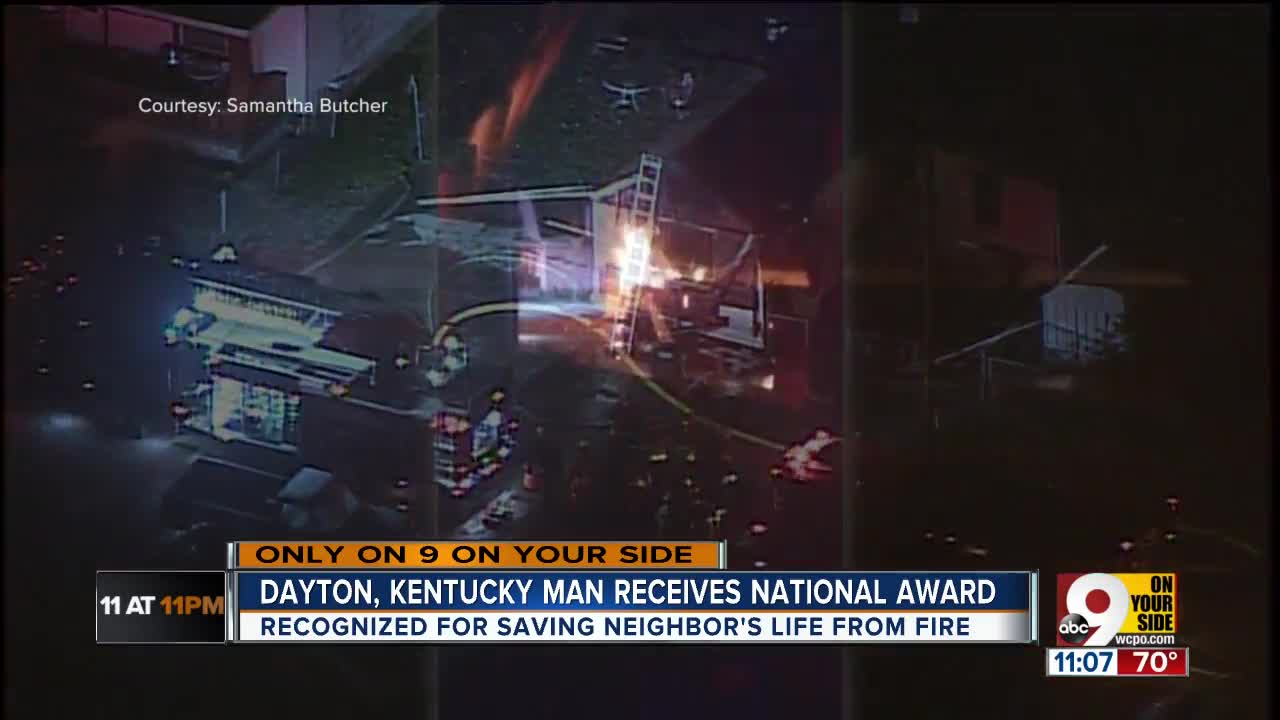 Kris Harrison didn’t think much of it the night it happened, he said. He didn’t have time.

DAYTON, Ky. — On Wednesday night, in the company of family, friends and City Council, Kris Harrison received a national award for a life-changing act of bravery: Running into his neighbor’s burning home and dragging the man away from the flames.

Harrison didn’t think much of it the night it happened, he said. He didn’t have time.

“They would have never got to him in time,” he said. “Basically, if I didn’t get him out of there, he would have been gone.”

The Nov. 24, 2017 fire woke Harrison and his girlfriend in the middle of the night, he said. They spotted the flames from their bedroom window, and Harrison — a former volunteer firefighter — leapt out of bed. Another man was standing outside the burning home already, having tried without success to wake up the man he knew was inside.

“It kind of swung open, and thick, black smoke — the heat was just so intense that I knelt down on the front steps,” he said.

He crawled under the smoke and into the house, where he spotted its unconscious occupant. Harrison dragged him halfway to the door before becoming overwhelmed by the smoke and returning to the entrance. There, he recruited a team of other volunteers to help get the man out as quickly as possible.

“Once we had got him out the door, the fire was already coming above us out the front door,” he said.

Only then did firefighters arrive. Although Harrison said they had been fast, they were outmatched by the speed of the fire. He estimated the unconscious man would have been dead within a few minutes of their arrival if no one had intervened ahead of time.

Harrison’s actions that night earned him the Carnegie Hero Medal, which honors ordinary people who risk their lives to help others. Dayton Mayor Ben Baker presented it Wednesday night at City Hall.

“It’s an honor to represent Dayton in saying, ‘Thanks for being a great neighbor,’” Baker said.

Other recent Carnegie Hero Fund honorees include a pair of men who saved a 6-year-old boy from drowning in the Mississippi River and a man who saved a 16-year-old from a burning tractor-trailer in South Dakota.

Harrison said he doesn’t feel his own actions were very special.

“I’m no hero,” he said. “I would do it again, put in that situation. Just always been that way. I would help any way, anybody in way that I could."