Lakota East and West team up to fight student suicide 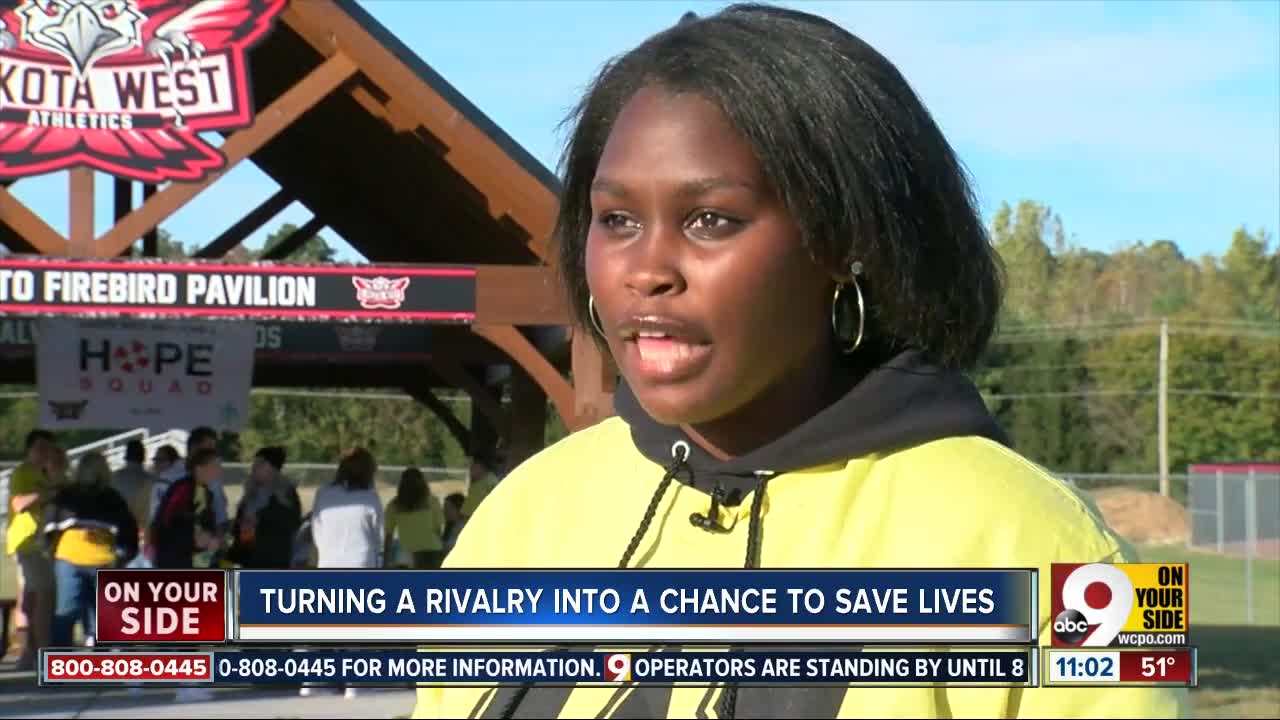 While the Lakota East-West rivalry played out on the field Friday night, students from both schools helped their classmates field some of life’s toughest calls. Members of the Hope Squad, a suicide prevention and mental health-oriented club that trains students to help peers through crisis, handed out fliers and advice at the entrance to the Firebird Stadium.

WEST CHESTER, Ohio — While the Lakota East-West rivalry played out on the field Friday night, students from both schools helped their classmates field some of life’s toughest calls.

Members of the Hope Squad, a suicide prevention and mental health-oriented club that trains students to help peers through crisis, handed out fliers and advice at the entrance to the Firebird Stadium.

“As students, sometimes it’s easier to connect with other students,” said club member Rachel Curry, a Lakota West junior. “Teachers don’t always have that special connection with their students.”

"I think there's a big thing with teachers,” he said. “You see them as very official. "It's Mr. and Mrs. their name. It's not something you can just talk to them about."

Like their fellow counselors, Curry and Tivin wore bright yellow Hope Squad T-shirts to distinguish themselves from the crowd. The issue of mental health is personal to Curry, she said.

“One of my friends said they were going to hurt themselves or try to hurt themselves,” she said. ”He’s still here today, and every time I think about that like, ‘I saved a life. I really did this. I can do this.’”

The nationwide Hope Squad project began in Provo, Utah, where founder and then-school principal Greg Hudnall searched for better mental health resources after a student ended his own life. Grant Us Hope, a nonprofit founded by the parents of a suicide victim, brought it to Greater Cincinnati in 2018.

Lakota East and West were two of the first local schools to train and deploy their teams.

The program doesn’t put the onus on its young participants to cure their classmates or solve urgent mental health crises. Instead, it teaches them how to listen and validate negative feelings, educate others about mental health and check up on peers they know are struggling. They also act as intermediaries between classmates and adult counselors at their schools.

Speaking to WCPO in 2018, Hudnall pointed out that most high schoolers are already hearing about depression, self-harm and other dark feelings their friends and classmates are experiencing. Hope Squads give them a toolset to address those situations productively. It also gives students who are struggling a clear, accessible person to approach.

"At first, I thought I was going to be like super pressured and burdened with it, but with our training that we actually go through and having healthy boundaries and things like that, that actually really helped,” Curry said.

She was happy to hand out fliers to fans of East and West Friday night, and many of those fans said they were happy to see it. The district has lost students to suicide in the past, including a junior high schooler in April.

"I graduated from West back in 2005 and (East) has always been a rival,” said attendee Katie Nicol. “But yet we are one community.”

If you or someone you know might be at risk of suicide, call 1-800-273-8255 any time to reach the National Suicide Prevention Lifeline. Cincinnati Children's Hospital Medical Center also has a list of local phone numbers and other resources for help here.