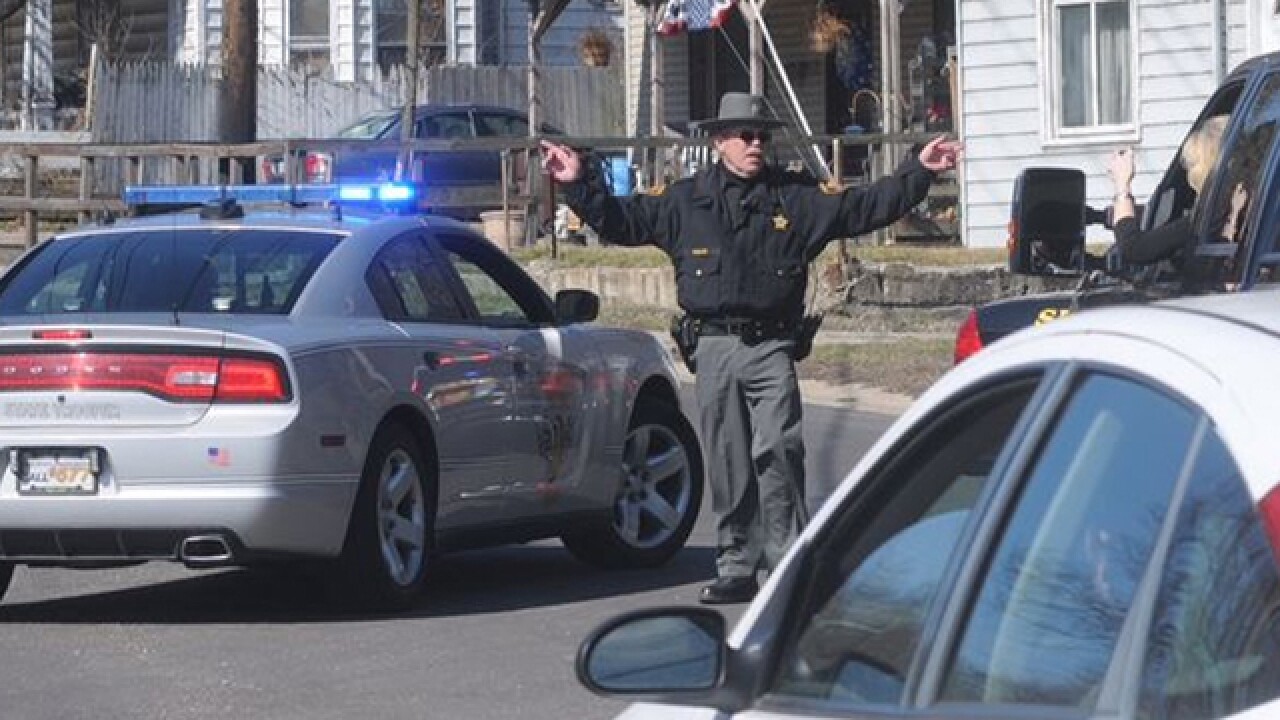 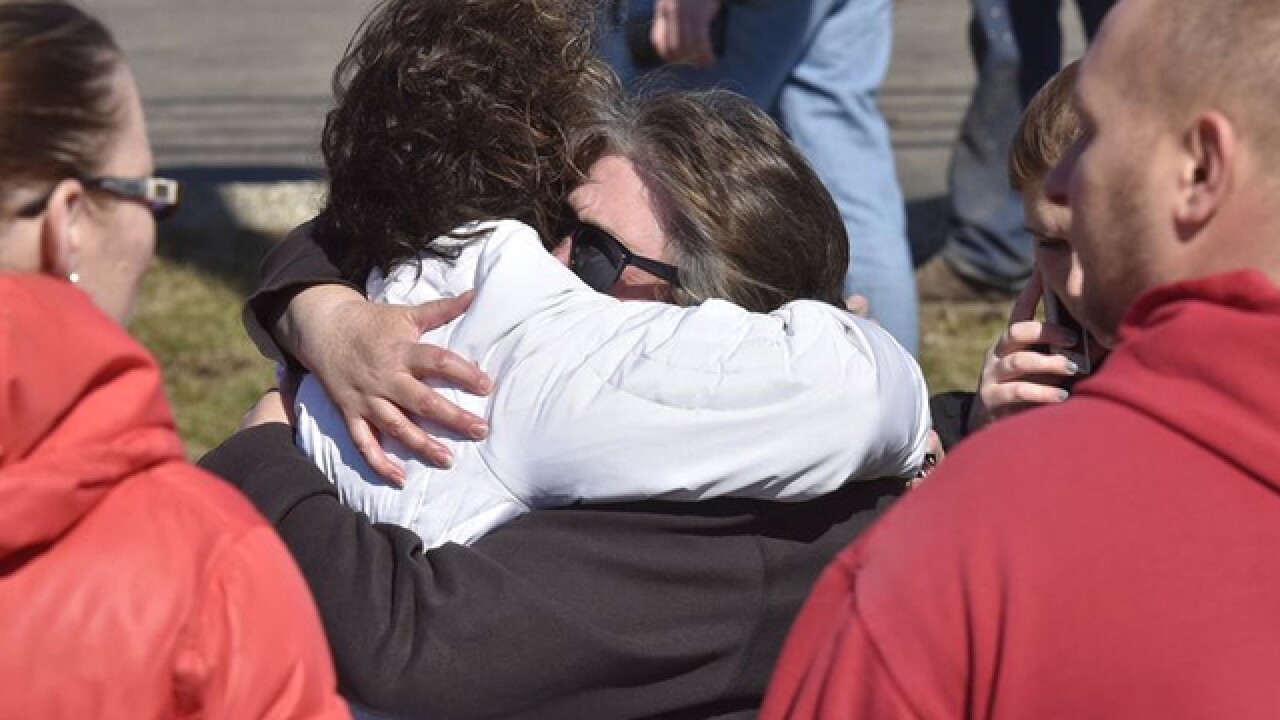 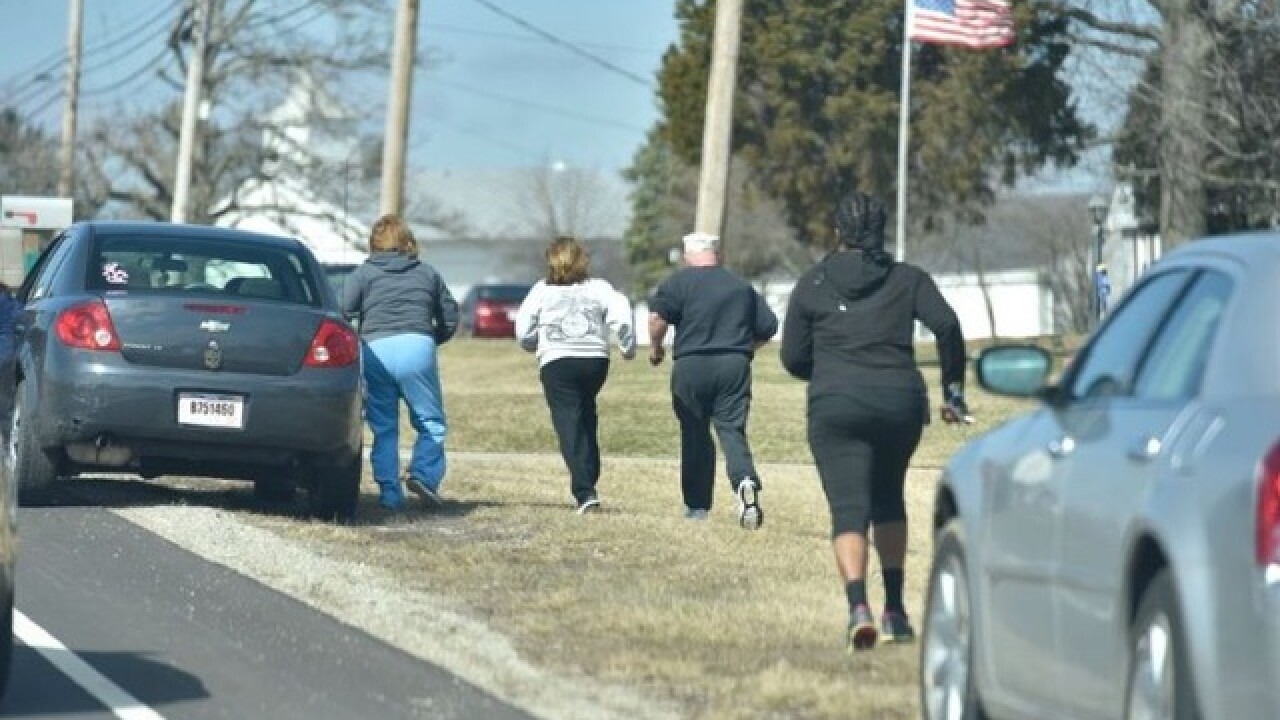 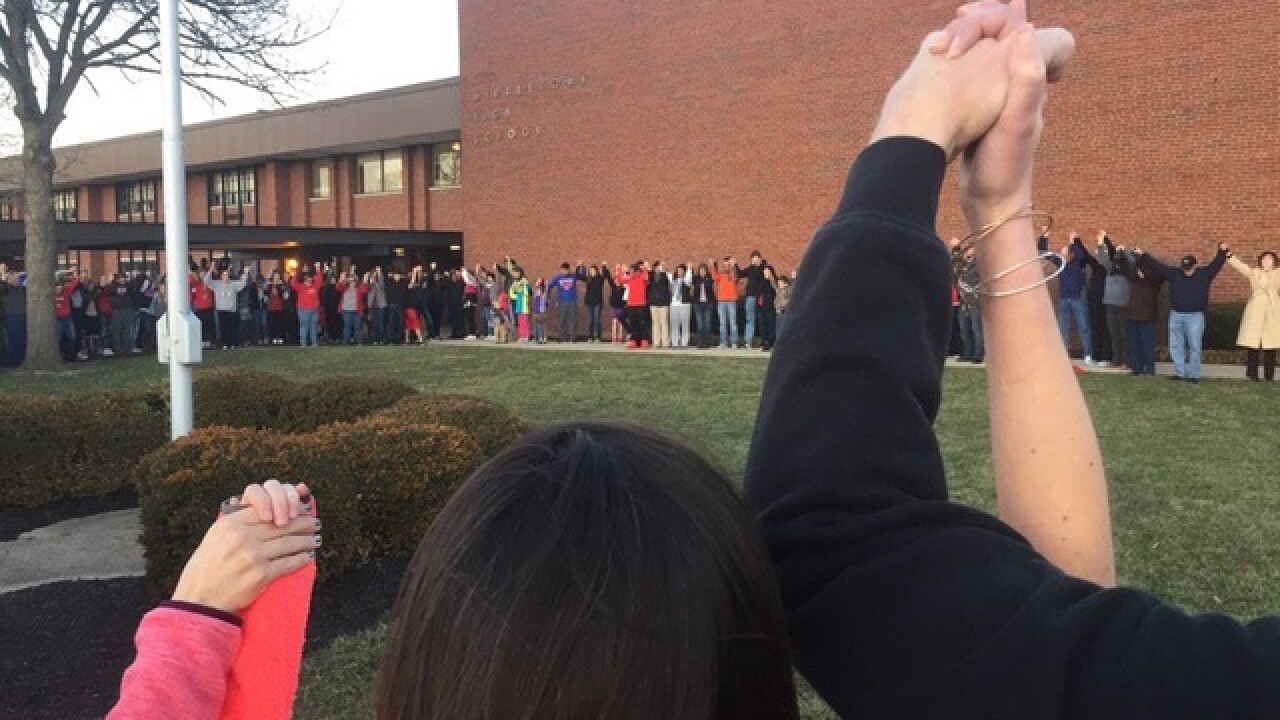 MADISON TOWNSHIP, Ohio -- Four teens are recovering after a shooting in the cafeteria at Madison Jr./Sr. High School during lunchtime Monday.

Cameron Smith, 15, and Cooper Caffrey, 14, were taken to Miami Valley Hospital after they were shot. Dr. Peter Ekeh, the hospital's trauma director, said one of them was shot just one time, and the other was shot multiple times. Neither needed surgery Monday, and both are in stable condition.

According to Madison Local Schools, both boys were "doing very well and are in very high spirits."

Two other students, Brant Murray and Katherine Doucette, both 14, were injured by flying shrapnel or while trying to get out of the way, authorities said. Doucette later posted on Facebook that a bullet grazed her; the injury wasn't serious, she wrote.

Deputies are still investigating the shooting, but Jones said no other suspect appears to be involved.

Caffrey and Hancock are both Madison wrestlers, according to tournament results .

Aleeanna Carpenter, 14, said if Hancock was troubled, he didn't show it.

"We all walked into the lunchroom," Carpenter said. "Austin was perfectly happy. We were all laughing and giggling and talking about stuff."

Carpenter was sitting at a table with Hancock and two other friends, she said. One of them made a comment about "having a problem" with Smith, Carpenter said, and Hancock asked if he should shoot Smith. Hancock told the group he had a gun, Carpenter said, but she didn't see it until he had it in his hand.

"It was a black gun," she said. "He pulled it out, and it was the loudest shot ever. And I just saw the bullets like slowly fall by my face."

Carpenter froze with shock, she said, running only when Hancock fled the cafeteria.

Listen to a 911 call from the school:

Hancock was taken into custody on school grounds shortly after running out of the building, the sheriff said. He said the teen used a .380-caliber, semi-automatic firearm.

"He ran from school, threw the weapon down and we retrieved the weapon," Jones said. "Where the weapon came from is a question (we're) trying to answer."

The sheriff also said investigators believe they know a possible motive for the shooting, but they would not release it right away.

Carpenter said she wasn't aware of Hancock being bullied, but indicated that he'd recently broken up with a girlfriend. Wrestling teammate Jordan Eslick said he was shocked to hear Hancock was involved.

"It didn't seem like anything was wrong with him," Eslick said.

Jake Phelps, an eighth grader, said he was eating lunch when he "heard a loud 'pop' and turned around."

"I saw this kid running and shooting people," Phelps said. "My first thought was just to run."

He said he hid in a closet with other students and cafeteria workers for more than an hour before they were told it was safe to come out.

The school district notified the injured students' parents immediately, and all other students were released around 1 p.m. The school will be closed again Tuesday, the school posted on Facebook.

"Imagine being in the cafeteria when you were growing up and you were in school, and you're eating lunch, and then all of the sudden there's an active shooter," the sheriff said. "Everything you've seen in school or you've seen on the news and you prepare for it, you train your kids for it sometimes goes out the window when the first shot's fired. You just think it can't happen."

Jones said the sheriff's office has trained so many times that the response becomes "muscle memory" -- but, he said, the impact is no less.

"What goes through my mind as the sheriff? My throat swells up, and I start sweating. And then you start thinking, 'How bad is it?'" he said. "It's a terrible feeling.

"Imagine the deputies that are getting the call and they're having to go: What are they going to see, what they've been trained for?" Jones said. "Imagine getting there and not knowing if you're going to have to shoot somebody in school, another student with a gun? You don't know. Is it your family? Is it your friends? It's our community. And today, it seems as though there's more school shootings, there's police officers being shot. It's the times we live, and you've got to prepare and train for that."

MUST READ: Is your child's school prepared?

When asked to describe what she felt when she was notified, parent Mandy Yates said, "Terrified, you're terrified. There's no other word for it. You kind of just go numb and just think about getting there (to your kids)."

Yates was one of the dozens of parents waiting at a Sunoco station near the school waiting for law enforcement to clear the students to reunite with their families. She said she thought the school and law enforcement handled the situation "pretty well."

Huff emphasized the school staff's extensive training in handling such an incident, describing their response in the aftermath of the shooting as "calm, collected, quiet."

Middletown and Edgewood high schools were also on lockdown briefly while deputies investigated the shooting at nearby Madison.

A gun was found on a student during the Middletown High School lockdown, according to Jones.

The Madison Local Schools District has about 1,500 students, 100 teachers and eight administrators.

The last time someone opened fire in an area school was when a 17-year-old La Salle High School student walked into a classroom and attempted suicide by shooting himself in the head.

"It's a disturbing thing," youth pastor Mary Taylor said Monday. "I talked to several people today, and my one comment is you always hear there is another city or anther school that it's happening at, but you don't realize until it actually hits home how devastating it can be."

The graphic below shows the number of shootings at U.S. schools and universities: