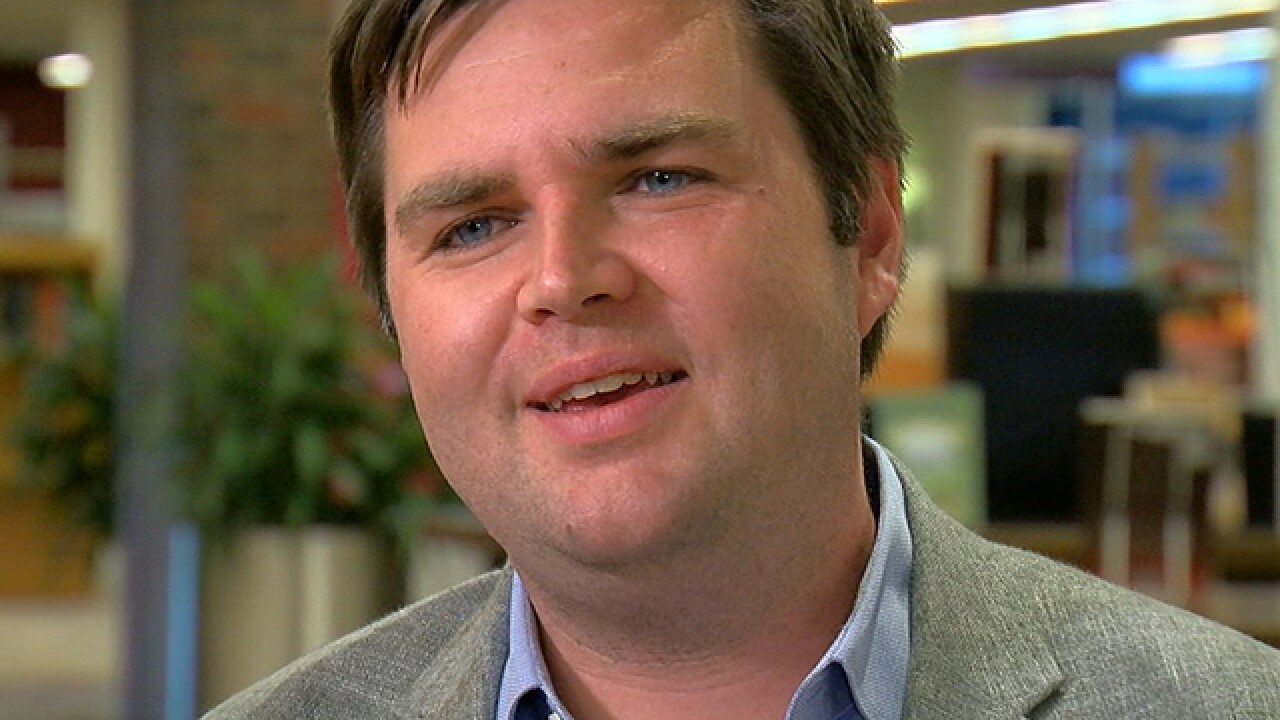 Copyright 2017 Scripps Media, Inc. All rights reserved. This material may not be published, broadcast, rewritten, or redistributed.
WCPO
<p>J.D. Vance</p>

CINCINNATI -- Bestselling author and Middletown native J.D. Vance thinks he has another book in him.

During a sit-down interview with 9 On Your Side after his talk in Cincinnati, Vance said he's not yet actively writing a follow-up to "Hillbilly Elegy," but is "kicking around another idea for a book."

"I'm sort of interested in writing about something I talked a little about in 'Hillbilly Elegy,' which is this really positive role that I think religion can play in the lives of a lot of folks," Vance said. "One of the things I note is, the disappearance of some of these religious institutions has been really bad for people because they lost that sense of community. They lost that sense of moral support that comes with active church participation, and I'd like to understand that a little more; understand why people abandoned the church, why people feel abandoned by the church and figure out a way to address that problem."

Vance, 33, said he didn't expect "Hillbilly Elegy" would be as popular as it has become. The initial print run was 10,000 copies. Now, the book is in its 61st week on the New York Times Best Sellers list. Ron Howard is set to direct a film version of the story.

"I didn't think anyone would read this book ... I just thought to myself, you know, 'This is going to disappear without notice.' I was OK with that. I was proud of it," Vance said. "I was happy I wrote it, but I didn't really expect too many people to read it."

"Hillbilly Elegy" is a personal look at families living in poverty, addiction and what it takes to move up in the world. It's told through the experiences of Vance and his family in Middletown and eastern Kentucky. It was published in June 2016 and quickly took off as people following the presidential race questioned how Donald Trump -- initially seen as a long-shot candidate -- could be rising to become the Republican nominee and, later, winner of the election.

Vance said he never intended for "Hillbilly Elegy" to be a political book, but during that election there were a lot of people asking questions about the regions where he grew up. That they looked to his book for answers was "mostly by luck," he said.

"I wasn't shocked that they attached themselves to my book and tried to understand what was going on in so-called 'Trump country,' but it's always been a little bit weird to me because neither Hillary Clinton's or Donald Trump's name appear in the book," Vance said. "And I think the problems I wrote about in the book are not just about one election cycle, these are things that have been with us for a very long time. And I think even if we get it right, they are going to be with us for a very long time to come, so I hope that the people don't think of it as a political book, because that's not primarily what it is. I hope people think it's a book about the American dream and what we can do to address it."

Vance said the book has received a mostly positive response in Middletown, though it has also received some criticism. Middletown is not always described in glowing terms in the book.

"But at the same time, I try to remind folks that this is there. It's part of -- not just Middletown -- it's part of southwestern Ohio. It's part of a lot of things that are going on in the country, and we can't just pretend that it doesn't exist because we prefer that it not exist."

Vance recognizes he's had opportunities others in Middletown and similar communities often don't have. After graduating from Middletown High School in 2003, he served in the Marines before graduating from Ohio State University and Yale Law School. He worked at a Silicon Valley investment firm. Since publishing "Hillbilly Elegy," Vance moved back to Ohio and started a nonprofit, Our Ohio Renewal.

"When a kid grows up in disadvantaged circumstances, they need a lot of things to go right," he said. "It's not just better policy, better teachers, better schools. It's really the people I wrote about: my grandparents, my aunt, my uncle, my sister, my Marine Corps mentors. I had mentors in college. And I really look back and think to myself, 'Oh my God, without any one of these people, I may not have any any of the opportunities that I've been fortunate enough to have.'

"And I really do think that's the main lesson, that we've got to figure out how to give more people more opportunities. But part of that process is putting good people in front of them and making sure they have access to some of the good people I did."

And although Vance does see himself writing another book down the line, his immediate focus is on trying to do something about the problems he wrote about. He turned down those asking him to run for Senate. Instead, he's living in Columbus with his wife and their infant son, working at his nonprofit and on bringing business investment to non-coastal cities.

Vance said he believes it will take a generation or more to make it so people who go from places to Middletown to places like Yale are no longer the exception.

He believes the way to fix the problem is by attacking it one piece at a time. Vance said his nonprofit, Our Ohio Renewal, is focusing on the grandparents, aunts and uncles of children whose parents have been taken away one way or another by the opiate epidemic, and focusing on how to support those family members so the children aren't "shuffling around in the system."

Vance could have just as easily gone down another path in life.

Maintaining strong families and social networks are important factors for building communities and supporting children, according to Vance.

Although it may not be easy, Vance said he recently found that even Middletown is seeing signs of business and community life improving. The downtown has "completely transformed" in the past few years, he said.

"As much as I am worried about the disappearance of the American dream in the country, I still think at some level everybody has the capacity to build it for themselves," Vance said. "And for a lot of people, it's not going to look like going to law school, or even necessarily going to a four-year college. But when I was 16 years old, what I really wanted was a job that was meaningful and paid the bills, and family that was happy. And I think we can give that to a lot more people than we are giving it to now, and I think that that's attainable for a lot more 16-year-olds.

"So, yeah, I think I could look a 16-year-old in the eye in Middletown and say, 'If you work hard, if you rely on people who are good to you and you get a little luck, then the dream is definitely possible.'"