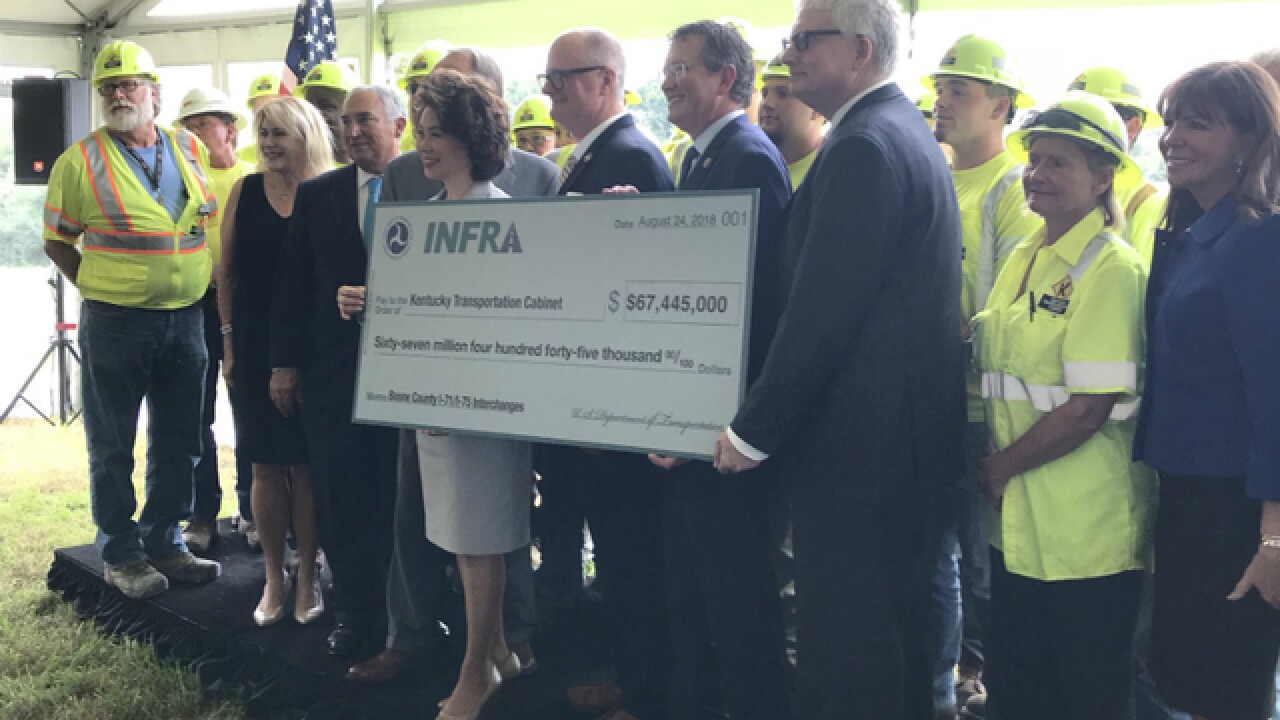 Copyright 2018 Scripps Media, Inc. All rights reserved. This material may not be published, broadcast, rewritten, or redistributed.
Pat LaFleur | WCPO
<p>FLORENCE, Ky. Aug. 24, 2018. U.S. Secretary of Transportation Elaine Chao presents a check to Northern Kentucky leaders for a federal grant to make upgrades to two interchanges along the Interstates 71 and 75 corridor in Boone County. (Pat LaFleur/WCPO)</p>

The money -- which comes from a U.S. Department of Transportation Infrastructure for Rebuilding America grant -- will go toward reconfiguring the interchanges at Mt. Zion Road in Florence and at Richwood Road in Walton. It will replace a traditional diamond-shaped interchange with a newer configuration to reduce congestion near and along the entrance and exit ramps to the interstate.

Sec. @ElaineChao speaking now. “It’s great to be back home.” (She lives in Kentucky.) @WCPO pic.twitter.com/8yTga1rQnL

The work, Chao said, is to ensure safer and quicker travel times along what she referred to as "this vital, vital freight corridor."

"As we all know, Northern Kentucky is one of our nation's largest logistical hubs," Chao said before an audience of local government and business leaders and Kentucky Transportation Cabinet employees. "It's really vital to our country. In fact, some refer to this region as the 'Silicon Valley of logistics.'"

The investment will attract even more logistical companies to the area, too, and that means more jobs, Chao said.

"That's what the president is always talking about."

Chao was joined by U.S. Representative Thomas Massie, R-Garrison, who also made sure to connect the grant to President Donald Trump's agenda: "INFRA stands for Infrastructure for (Rebuilding) America -- making America great again, as it were," Massie said.

Chao said the grant for Boone County was one of roughly 20 awarded across the country out of more than 200 applications.

"In Boone County over the last 10 years there have been 151 economic development projects, 151 companies have expanded or located here," he said. "$3.6 billion in capital investment and over 16,000 jobs created. That's why this kind of economic growth and vitality needs infrastructure."