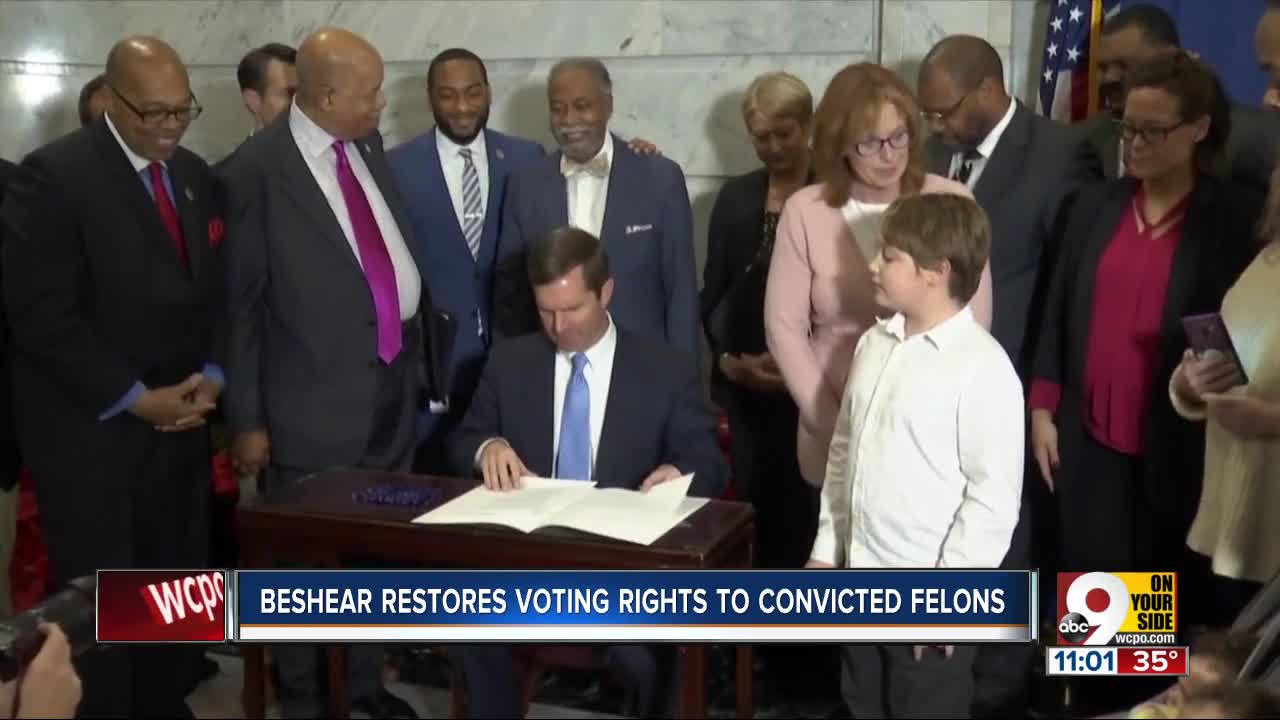 An executive order signed by Kentucky Governor Andy Beshear restored the voting rights of more than 100,000 convicted felons in the Bluegrass state. However, there are exceptions to the rule, more than half of the state's felons will not have their rights returned.

FLORENCE, Ky. — An executive order signed Thursday by Kentucky Gov. Andy Beshear restored the voting rights of more than 100,000 nonviolent felons in the Bluegrass state. However, there are exceptions to the rule. More than half of the state's felons will not have their rights returned.

"It's my country," Amanda Herdman, a convicted felon who lives in Florence, said of learning she would once again be able to vote. "It's my nation, you know? Being able to have the right to walk in there and say, 'Okay, it's one of thousands, but it's mine."

Herdman said she became heavily involved in drugs during her teenage years. Starting at the age of 18, she was convicted of several possession and trafficking felonies. in 2015, she turned her life around and started going to addiction recovery meetings. From there, she regained custody of her daughter and started a business.

She now rehabs homes with her husband, Stephen. He spent close to eight years in prison for robbery.

"I've been shunned away because of who I was," Stephen Herdman said.

He doesn't qualify to have his voting rights returned by Beshear's executive order because his crimes were considered violent in nature.

"I've got a lot of good buddies who are convicted felons," he said. "Great, great guys. They'll give you the shirt off their back, but I just want to see for us — us as convicted felons — let us be members of the world."

Faced with few opportunities, the couple started their own business rehabbing houses.

"It's just sad that even though I pay taxes, even though I go into these homes and I make them beautiful and make these dreams happen, or I can clean your house, that I can't reach the same things because I'm a felon," Amanda Herdman said.

"My faith teaches me forgiveness," Beshear said of his decision to sign it. "We all make mistakes."

Even though the order changes things for only one of the Herdmans, they see it as a possible first step.

"This little big thing that happened today, what's next to come?" Amanda said. "It's just the beginning."

A list of felonies not affected can be found on the executive order here.