With no transit tax on the ballot, Ohio governor's race could set stage for Metro's future 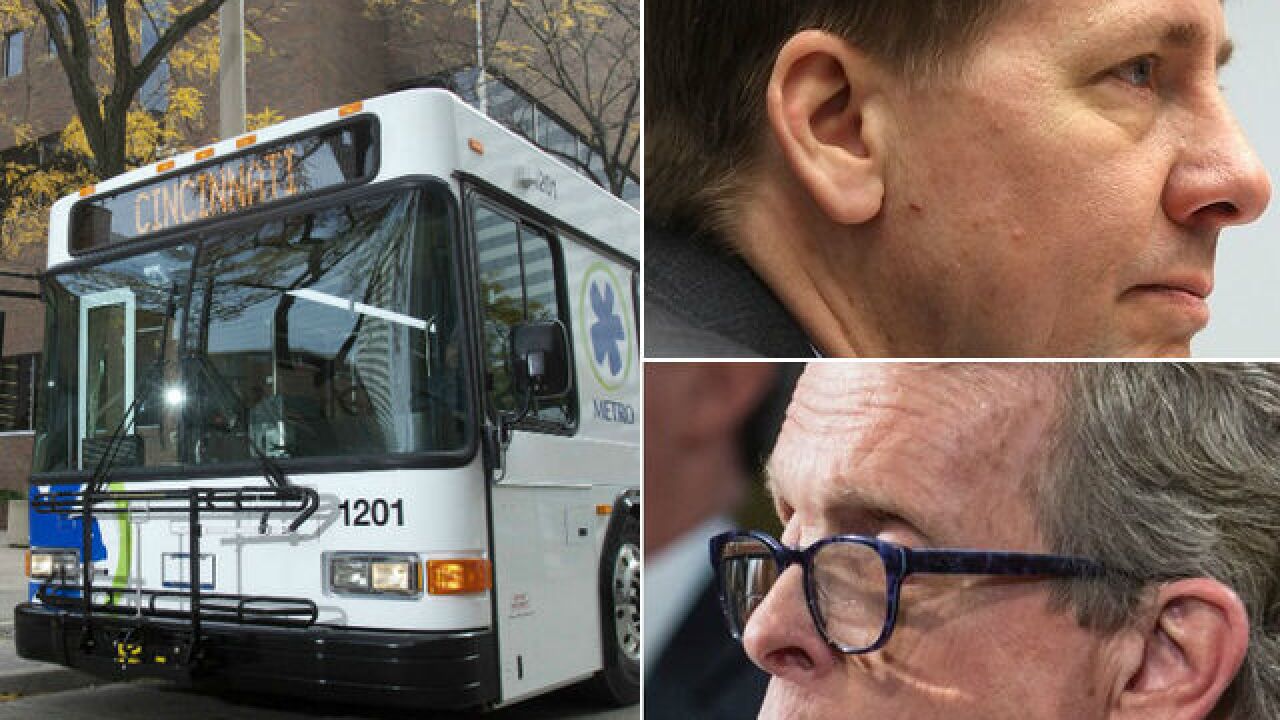 Given the absence of any transit-related measure on this year's ballot, the race for Ohio governor stands alone as the one decision local voters have to help shape the future of public transportation in southwest Ohio.

If public transit in the Tri-State ever needed a vote of confidence from the region's electorate, some would argue 2018 was the year it needed it most. Cincinnati Metro is sputtering on a 45-year-old funding structure and teetering on the edge of a $184-million budget shortfall over the next decade.

As soon as next year, officials with the Southwest Ohio Regional Transit Authority are anticipating an operating deficit possibly in the millions of dollars. Over the summer, transit leaders worried that deficit could be as high as $6 million short of what Metro needs to maintain its current levels of bus service in 2019, but SORTA spokeswoman Sallie Hilvers said it could be less.

"We've been frugal this year, and the deficit for next year is expected to be smaller than that, but there will be less revenue than needed to cover expenses for 2019," Hilvers said Tuesday in an email to WCPO.

The governor's race between Democrat Richard Cordray and Republican Mike DeWine will have a less direct and immediate impact on Metro's operations than something like a new sales tax levy, but it could set the stage for Metro's future as the region's transit agency continues to search for more local sources of funding.

Without a tax levy, what now?

This is the question bus riders found themselves asking when SORTA's Board of Trustees chose in July not to pursue a ballot measure that would raise the Hamilton County sales tax in order to fund its bus system.

"I'm angry right now, so I'm going to keep my comments brief," said Cam Hardy during the board's July 25 meeting. Hardy is a daily bus rider and heads up the grassroots bus advocacy group, the Better Bus Coalition. "All I'm hearing is pie in the sky. We need to take that '20 million rides by 2021' mission statement down. That's not going to happen if we're slashing service.

"At this point, the public can't trust this board," he said.

SORTA owns and operates Cincinnati Metro, and its board of trustees oversees its budget, which topped $98 million to cover operating costs in 2018 alone.

READ MORE: What a transit tax would have delivered, and what it would have cost

Board members who opposed putting a measure on this year's ballot said their decision came from a lack of consensus, including the board's chair, Kreg Keesee.

"It has become clear to me that we have not reached an appropriate consensus within the Board and the community to vote tomorrow to present Hamilton County voters with a sales tax option to address the significant financial and operational needs of the Metro bus system," Keesee said in a July 24 news release, less than a day before the board was set to vote on a ballot proposal.

"I do not believe that the current environment provides a clear path to victory at the polls even if consensus had been reached," he said.

Another board member called a ballot measure's failure at Tuesday's polls a "political reality."

When it comes to funding public transit, the Ohio Statehouse has almost nowhere to go but up, and with Hamilton County balking on a local measure and federal transit funds coming up short from Washington, state funding could become more important than ever for Buckeye transit agencies.

There's opportunity for growth here, and Gov. John Kasich's successor will have a chance to set -- or change -- the tone going forward.

As a state, Ohio puts aside less money for public transportation than 44 other states, but ranks 14th in the country when it comes to public transit ridership, according to a 2017 analysis by the nonprofit policy research institute Policy Matters Ohio.

The lack of funding meant Ohio's transit agencies fell short of the number of transit rides needed -- by some 38 million -- to meet demand statewide. The Ohio House budget this year only allocated $6.5 million for public transit.

Of that $6.5 million, Metro saw $800,000 in 2018. That's less than 1 percent of its operating budget for the year, according to SORTA. Metro received no state funds toward capital expenses like new buses to replenish its aging fleet or new benches and shelters at more bus stops.

I-TEAM: Most Metro riders have nowhere to sit while waiting for the bus

More than half of Metro's operating budget comes from a small portion -- 0.3 percent -- the city of Cincinnati earnings tax.

Of the two choices for governor, only the Democrat offered even a quasi-concrete plan to alter public transit's present course in Ohio. Cordray ran on the promise of a $1.8 billion infrastructure package that he said, for the first time, would include money for public transit, but he never specified on the campaign trail how much of that $1.8 billion would go to transit agencies.

DeWine's responses to questions about public transportation came up even shorter, saying that, if local jurisdictions demonstrate a need for more money toward transit, his administration would meet that need.