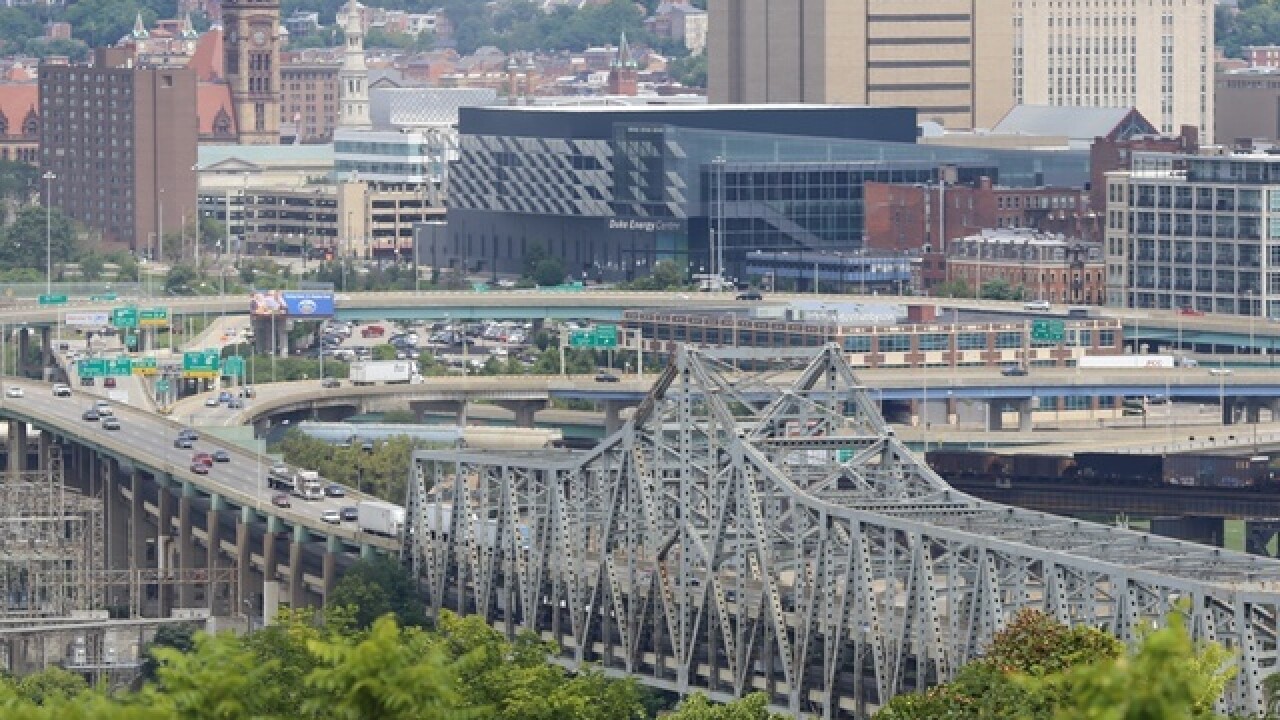 CINCINNATI -- President Donald Trump's visit to Cincinnati this week is, ostensibly, to talk about improving the nation's inland waterways -- levees, locks, dams, things like that.

His appearance here Wednesday is part of a week-long push by the White House for a $1 trillion infrastructure overhaul.

But it would be bizarre if Trump didn't touch on the infrastructure elephant in the room: the outdated, overloaded Brent Spence Bridge. Fixing the bridge was one of the president's many campaign promises, after all. He appointed Elaine Chao -- wife of Senate Majority Leader Mitch McConnell, R-Kentucky -- to head up the Department of Transportation, suggesting the White House has the Brent Spence Bridge on its radar.

Another promise: Trump said he'd cut off federal funding for so-called "sanctuary cities," or places that don't cooperate with federal immigration agents. He even signed an executive order many people have interpreted as fulfilling that pledge.

Then early this year, Mayor John Cranley claimed Cincinnati is a "sanctuary city" -- leading many people to speculate whether Cranley killed any hopes of getting federal help for the bridge. A reporter even asked White House press secretary Sean Spicer about it.

Here's why you should rethink that speculation:

It's not Cincinnati's problem.

Cities don't build interstates, or interstate bridges. They're usually considered a state responsibility. So, Cincinnati's not on the hook to pay for the Brent Spence Bridge.

It's not Ohio's problem, either: Kentucky owns the bridge, thanks to a 1981 federal court ruling that the Bluegrass State owns the Ohio River.

Ohio is funding part of the project, but that's for the stretch of Interstate 75 running through Queensgate just north of the bridge. The work would augment the ongoing, 10-year, half-billion-dollar Mill Creek Expressway overhaul project, which began in 2010 and stretches from the Western Hills Viaduct to the Paddock Road interchange in Norwood.

READ MORE: Leaders worry about 'funding scarcity' for I-75 rebuild

Ohio Gov. John Kasich was also instrumental in urging the Ohio Department of Transportation to coordinate with then-Kentucky Gov. Steve Beshear and the Kentucky Transportation Cabinet to develop the joint proposal to build a sister bridge to sit alongside the Brent Spence, a plan that transportation officials price-tagged at about $2.6 billion. The two governors unveiled the plan together at a 2014 news conference in Covington.

What's pumping the brakes on getting the project started: how to pay for it, a topic of contention since it became clear the corridor needed attention. Some Northern Kentucky lawmakers are especially wary of the idea of using tolls to fund the project -- a common measure with big infrastructure projects these days, more and more of which rely on public-private partnerships.

The idea with "P3's," as they're often called, is the government partners with a private firm, and then re-pays the costs of a project over time. Tolls are a common financing tool for such projects. Some leaders south of the river, though, feel Northern Kentucky commuters would bear an unfair burden of the cost, since more Northern Kentuckians work in Cincinnati than vice-versa.

Setting aside legal questions about Trump's executive order, it'd be politically wacky for President Trump to withhold funding from two states he decisively won -- and likely will need to carry again, if he plans on re-election.

Cincinnati's not been on any federal government list of sanctuary cities.

ICE issued a few weekly reports earlier this year, but it's been on hold for weeks because they were riddled with mistakes.

A section of that report also listed jurisdictions that had policies limiting cooperation with federal immigration agents. Cincinnati was never included.

As Trump's executive order faces a legal battle, federal officials have backed away from his aggressive, expansive threat to withhold funds. Instead, Attorney General Jeff Sessions says the executive order will apply only to federal grants from the Justice Department and Department of Homeland Security.

Major infrastructure funding typically comes from the Department of Transportation.

And, just last week, the city got a $1.2 million grant for firefighters from the Federal Emergency Management Agency -- part of Homeland Security.

That's a good sign that Cincinnati's funding isn't at risk.

Saying you're a "sanctuary city" doesn't make you one.

We've run through the litany of reasons Cincinnati may not really be a "sanctuary city," but they're worth reiterating:

Official policy instructs Cincinnati police to cooperate with federal immigration officials, though they're told not to target or arrest people simply because they might be undocumented.

Cincinnati police don't get ICE detainer requests because the city doesn't have its own jail. Instead, city inmates go to the Downtown jail that Hamilton County Sheriff Jim Neil operates.

And Neil said deputies will continue to detain undocumented inmates at the request of federal immigration authorities. Mike Robison, spokesman for the sheriff’s office, confirmed no policies changed at the Hamilton County Justice Center even after Cranley declared Cincinnati to be a "sanctuary city."

Trump's executive order focuses on a very specific part of federal law pertaining to local officials' communication with federal immigration agents. Cranley and the city's top attorney say Cincinnati complies with federal law, and WCPO has not found any city policies that are in violation.