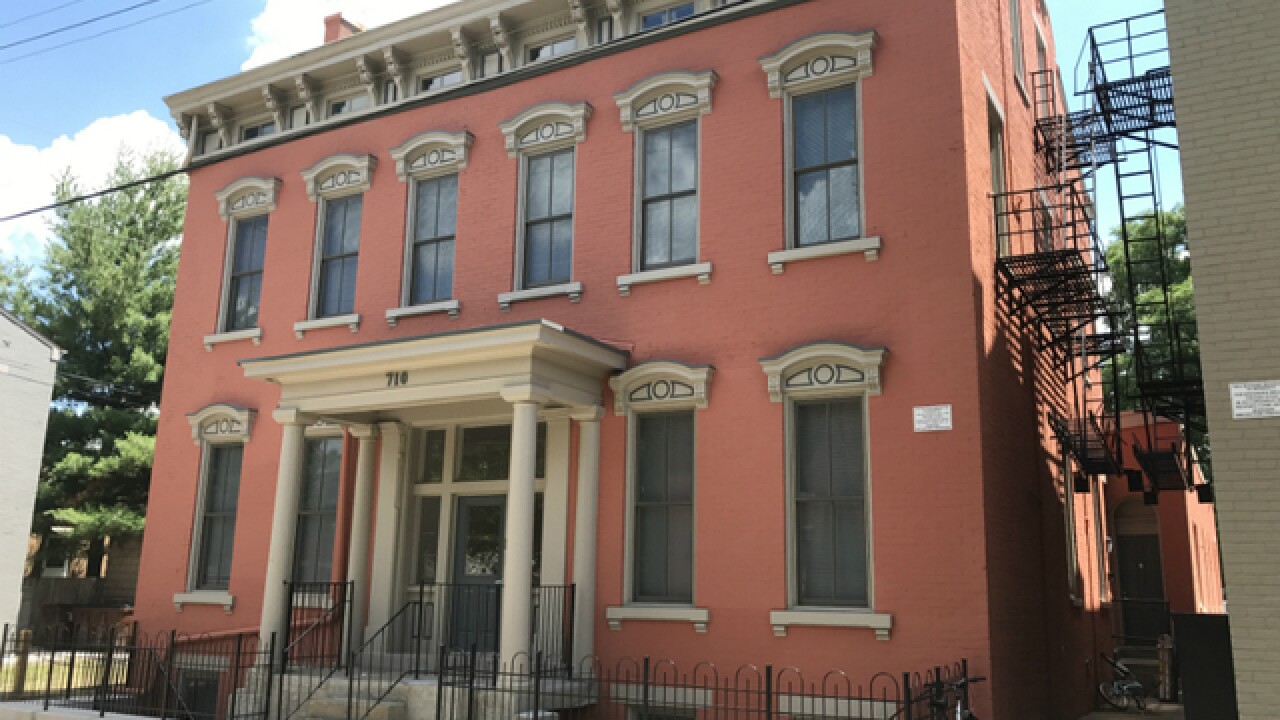 Copyright 2017 Scripps Media, Inc. All rights reserved. This material may not be published, broadcast, rewritten, or redistributed.
Pat LaFleur | WCPO
<p>This building, located at 710 Greer St. in Covington, is one of eight historic properties rehabilitated by non-profit Covington-based Welcome House, as part of its efforts to provide more affordable housing options in the area. (Pat LaFleur/WCPO)</p>

COVINGTON, Ky. -- Linda Young of Newport is on a mission: to end homelessness in Northern Kentucky.

It's a lofty goal, to be sure, but Young has accomplished a lot as executive director of Welcome House, a Covington-based nonprofit with a focus on serving Northern Kentucky's economically and financially disadvantaged residents.

"It's not like we need to cure cancer," she said. "We can actually do this."

Young and her organization will celebrate Tuesday another milestone as it unveils eight rehabilitated properties in Covington's historic Mainstrasse Village district. The project, which began in 2014 and concluded this year, brings 41 new, affordable housing units to the neighborhood.

The $9.5 million project was financed by a mixture of low-income tax credits, federal and state historic tax credits, and a little more than $500,000 pitched in by Welcome House.

Young and her staff will host an open house at 5 p.m. Tuesday at the intersection of West Seventh and Greer streets in Mainstrasse, to showcase the rehabs.

"We're very proud of these buildings," Young said. "They were a mess when we came in."

The eight structures are classified as historical buildings, which means they were all rehabilitated to historical standards, Young said.

But it's more than just the buildings Young will be celebrating, but also what they represent: one more step in narrowing the gap between the price of housing in the area and residents' income, a dynamic she said has transformed in recent years.

"Seven years ago, it became more evident that the gap in the price of housing and what the average wage for entry level jobs was widening, and it just kept getting wider," she said.

This has meant, Young said, that the demographic of residents experiencing housing troubles is expanding -- whether that's finding affordable housing or homelessness.

"It's not just low-income people anymore. There are people who have a college education and can't afford market-rate housing," she said.

Young said the gap between home prices and income is a result of rising housing costs coupled with stagnant wages. "Minimum wage has not changed significantly and the economy has shifted from manufacturing to a service sector economy, more lower wage jobs," she said.

'More than just bricks and mortar'

On its website, Welcome House touts itself as "more than just a homeless shelter."

"We're not just working to provide more affordable housing," Young said. "We follow up after people move in. We're there."

Formed in 1982, Welcome House offers a wide variety of programs and services meant to guide economically and financially disadvantaged Northern Kentucky residents. Beyond the organization's focus on housing, it also offers financial literacy programs and income support services, among others.

In other words, Young said, the buck doesn't stop once the brick is laid.

"Say one of our residents is struggling to pay rent, we can go check in, help with finding solutions," she said.

Much of the programming is geared toward income management, Young said, because the majority of Welcome House's clients are employed.

"Most of the folks are working. It's not enough," she said. "It's not that they're not working."

"When these families have to move constantly, the kids are out of school, they start disliking school, stop going," she said, citing that Covington Public Schools is trending around a 30-percent transient student rate.

"Often a student will start the year there, and will be gone by the end of the year," she said. "Really it's about the kids."

Pat LaFleur reports on transportation and development for WCPO. Connect with him on Twitter ( @pat_laFleur ).