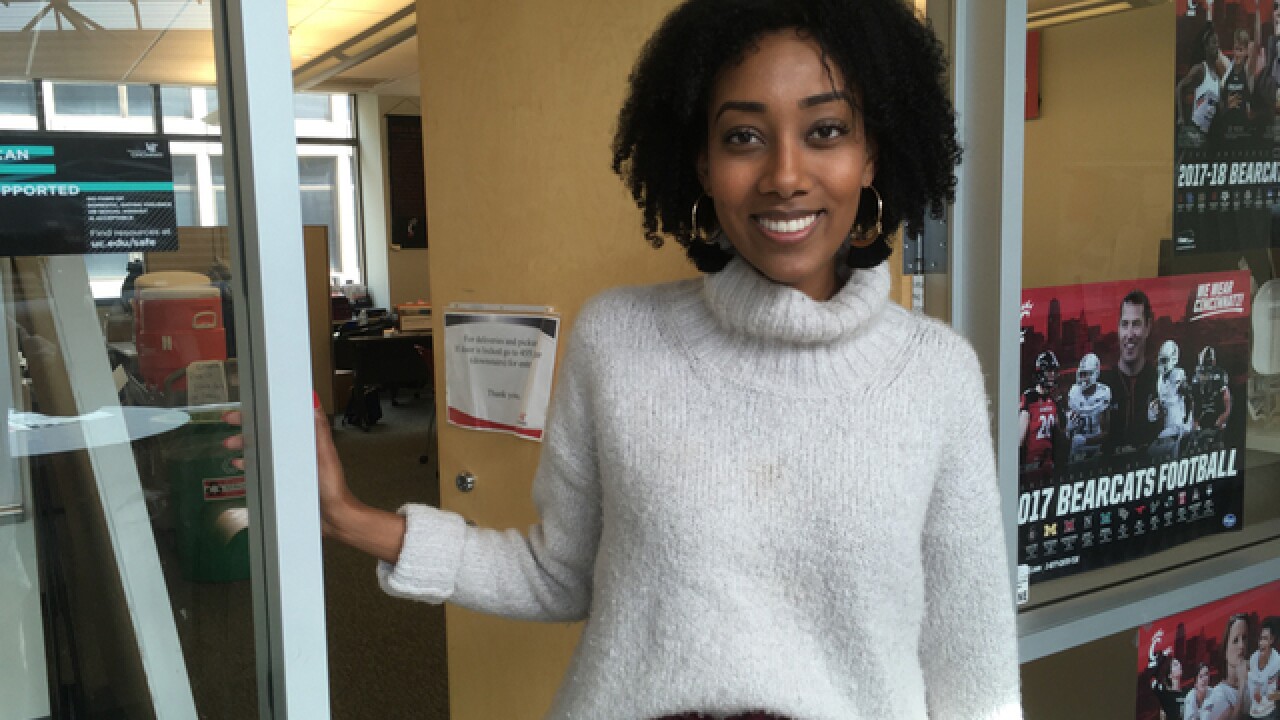 CINCINNATI -- Double majoring in neuroscience and organizational leadership is more than enough to fill the plates of most people.

However, University of Cincinnati senior Megdelawit Habteselassie also finds time to serve as student body president and as a member of the UC alumni council.

Students have elected other women as student body president before Habteselassie, who goes by her family's generational nickname of Sinna. However, she is the first African-American woman to hold the position in UC's 199-year history.

"I wish it happened sooner," said Habteselassie, 22, from her office in the Steger Student Life Center.

The Dayton native's parents emigrated to the United States from Ethiopia more than 20 years ago. She initially planned to go into medicine but decided her passion was in social justice.

"I want to go into international law and perhaps work for the Gates Foundation, which does phenomenal things for sustainable development," said Habteselassie.

However, for now, she is focused on her duties as student body president, which were plenty during the run-up to the university's homecoming earlier this month.

She credits a strong network of women, including several mentors, for encouraging her to run.

"It's good to know that I am in this role because a lot of women helped me be here, and I would certainly say that if those kinds of conversations had happened sooner there probably would've been the first black woman president a lot earlier," she said.

Habteselassie said studies show that women need to be asked several times before they will consider running for elected office. That was indeed the case for her, she said, but students greeted her candidacy warmly once she committed to running.

"It's amazing to see so many people ready for that change on our campus and to welcome me into this leadership role," Habteselassie said .

Student body vice president Umaize Savani believes Habteselassie is giving a voice to those whose voices are not heard as loudly as others.

"To me, it shows that a change is coming to UC and to this country. I also think this reflects the changes that have taken place at UC over the last four years," Savani said.

"We're working on doing a 'love yourself' campaign on campus and raising money for a mental health advocate award, and we have our co-directors of mental health awareness, who are really striving to expand what it means to be healthy," Habteselassie said.

Debra Merchant, vice president of student affairs, said she believes Habteselassie is making the most of every moment.

"Her leadership opens 'thought doors' for everyone," Merchant said. "I'm a big believer in: You can't be what you can't see. Sinna's engagement with students, faculty and staff sends the important message throughout our UC community that leadership is open to all."

Habteselassie has a knack for connecting with all types of students, Savani said.

"She knows how to speak to the student that is struggling while also being able to see eye to eye with a football player," Savani said. "Her respect and love for every single Bearcat continues to astonish me every single day."

Habteselassie will graduate this year and plans to move to Washington, D.C., to work for a few years before going to law school.

In the meantime, she hopes her election opens doors for women after her.

"I think the one thing that I think about is -- my mom tells me this, too -- 'Make sure you're not closing the doors behind you and to ensure that you're lifting when you climb,'" she said.