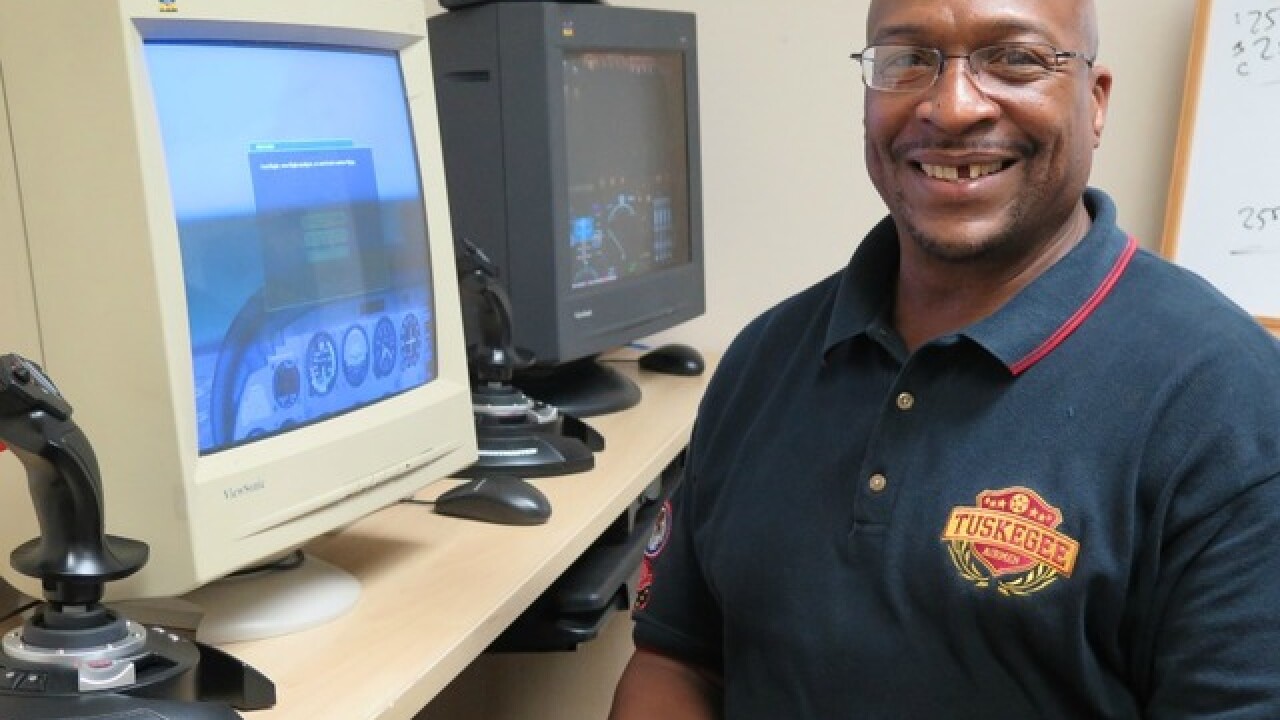 Copyright 2017 Scripps Media, Inc. All rights reserved. This material may not be published, broadcast, rewritten, or redistributed.
Lucy May | WCPO
<p>Marvin Bryce, Sr., with the flight simulators at his office in Roselawn.</p>

That’s why he’s excited to be launching the Greater Cincinnati Chapter of Tuskegee Airmen’s new aviation program for inner-city youth.

An anonymous donor pledged $10,000 to the local chapter for the program. Bryce is serving as the chapter’s youth aviation director and expects to have the program up and running in the coming weeks.

The goal is to start working with a dozen or so young people to teach them what they need to know to fly a plane or pursue another career in aviation. Even if the kids decide aviation isn’t for them, Bryce said the program will show them that there are opportunities in life beyond what they see in their neighborhoods.

“So they can understand that there’s more to life,” said Bryce, the founder of Kingdom IT Solutions, an IT services company, and president of Soaring Spirits Aviation, a nonprofit ministry that he started to transport sick and dying patients to medical facilities free-of-charge. “If they don’t know they can achieve, they will never reach for it.”

RELATED: 'God saw fit to give me a second chance'

A member of the local Tuskegee Airmen chapter for the past several years, Bryce is the right person to lead the new effort, said James Shaw, the chapter’s president.

“He has the training, and he’s a pilot. That’s a great asset for our chapter,” Shaw said. “And he knows a lot of other aviation people in this city.”

“I want them to know who they are as people and that you are who you say you are and not what other people say you are,” said Bryce, who also is a minister. “All things are possible if you just put your heart into it.”

‘Allowing the youth to think’

Bryce has been operating his own youth aviation program through Soaring Spirits. He created it after a number of parents asked him to teach their kids about flying airplanes.

He has two flight simulators at his Roselawn IT office and expects to add several more for the new program. Bryce can use his IT skills to build flight simulators using old computers that have been donated, he said. He expects most of the $10,000 pledge would pay for flight time on rented planes -- which can cost anywhere from $400 to $500 for four hours of flying time -- or transportation costs to rent buses for field trips.

Ultimately, the program will need more funding, he said.

To help get things started, Bryce began reaching out to local youths over the summer.

Bryce also had a two-week summer session at New Prospect Baptist Church where he helped about 20 young participants build and fly drones.

Five of the young people in that program took a keen interest in aviation and engineering, he said, and one young man in particular understood aerodynamics well enough to make several improvements to his glider so it would go farther.

“Sometimes it just takes that initial push to let them know what they’re really capable of doing,” he said. “Allowing the youth to think.”

The program also will give its young participants more adults in their lives to encourage them, said Ena Fletcher, whose father Harold Hillery was a Tuskegee Airman. Fletcher now serves as financial secretary for the local chapter and is a member of its education committee.

“Especially in the city, a lot of kids don’t have advocates,” she said. “They don’t have people behind them that are thrusting them forward and showing them what’s out there.”

Combining Bryce’s passion for the work and experience with youth aviation with the good name of the Tuskegee Airmen should help the program reach new heights, Fletcher said, adding “I think it’s a perfect marriage.”

It also will help introduce more young people to the Tuskegee Airmen, the black military aviators who were trained in an isolated complex near Tuskegee, Alabama, and completed more than 1,500 missions during World War II.

“Our originals will be gone before too long, all of them,” said Shaw, a 30-year Air Force veteran who served in Vietnam. “We’re concentrating on trying to help youth to be successful.”

Bryce said he’s confident this new program will accomplish that no matter what.

Learning about potential beyond the neighborhood will take the youth aviation program participants far, he said, even if they never take flight.

More information about the youth aviation program will be on the Greater Cincinnati Chapter of Tuskegee Airmen’s website. Those interested in donating to the effort and parents or guardians who want more information for their children can email Marvin Bryce at marvin.bryce@gcctai.org.