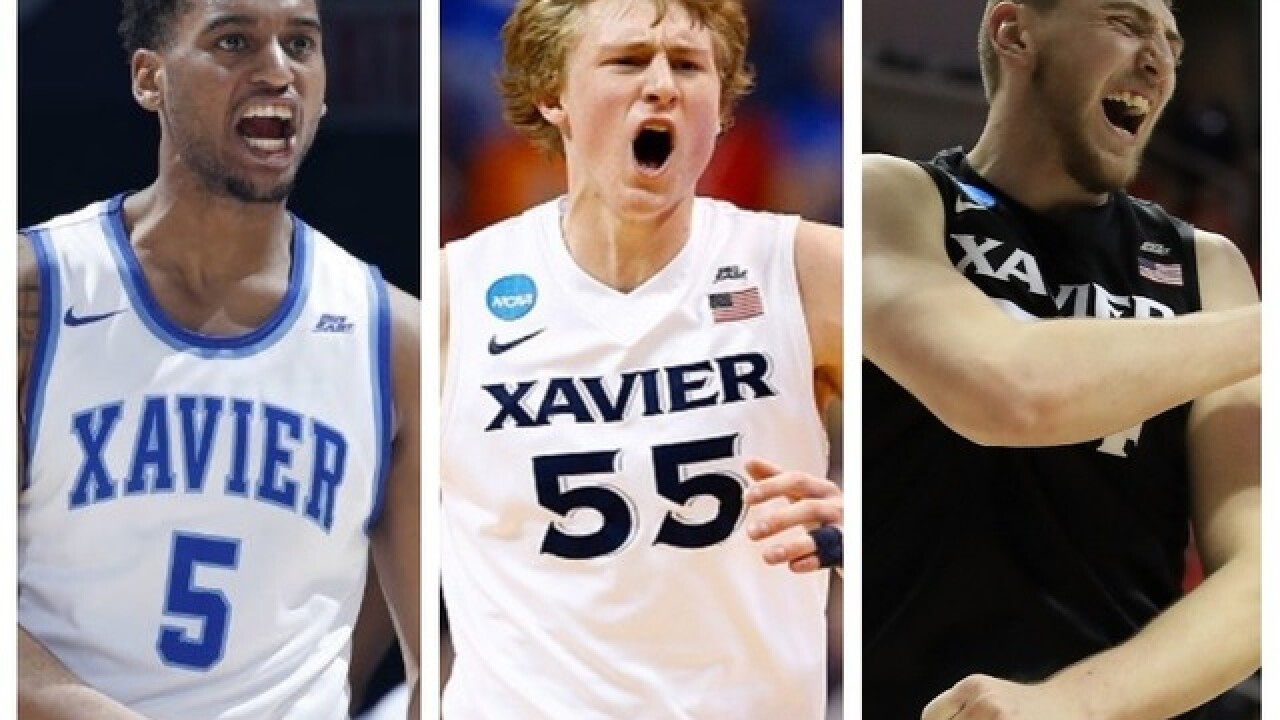 This story was published before Xavier defeated Providence Wednesday night.

CINCINNATI -- Trevon Bluiett tested the NBA waters during each of the past two summers and both times opted to return to Xavier. He's become one of the most accomplished players in Xavier's program history, and he believes playing four years in college has better prepared him for the next level.

"You don't want to just get in the NBA, you want to stay in the NBA," Bluiett said. "Guys that stay one or two years, they don't get as much knowledge as four-year guys. Being here four years sharpens you up."

Bluiett will play his final game at Cintas Center Wednesday night as the school's second all-time leading scorer with 2,142 points. As he steps onto the court, a Big East Conference championship and potential top seed in the NCAA Tournament still hang in the balance.

Bluiett, along with forward Sean O'Mara and guard J.P. Macura, might be the most successful senior class in the history of Xavier's program. They've been a part of 100 Musketeer victories and counting.

Former Xavier forward James Farr compiled a school-record 108 wins from 2012-2016. If this trio matches Farr's total, the Musketeers will reach the Final Four for the first time in program history.

"It's amazing, to average 25 wins a year," coach Chris Mack said. "Ninety-eight percent of college basketball players don't get to experience what those guys have. They've had a lot of bright moments. Hopefully the brightest is yet to come."

Prior to Wednesday night's game against Providence, Bluiett, O'Mara and Macura -- along with graduate transfer Kerem Kanter and walk-on Matt Singleton -- will take their final bows in front of the home fans.

"It brings a lot of sentimentality," Mack said of Senior Night. "We have a pretty mature group, a group that's led by the seniors. I don't want them to get caught up with hugging their parents and all that before the game. It's about the game. Our guys understand that."

Bluiett, Macura, and O'Mara have helped lead the Musketeers to three -- soon to be four -- straight NCAA Tournaments and have reached the Sweet 16 twice, including the Elite Eight last season. They have won six NCAA Tournament games in their careers.

A victory over the Friars would give Xavier a share of its first Big East title since joining the reconfigured league in 2013.

"We've had a lot of guys come before us who kind of set the tone the past two years as far as what the expectations are for a Xavier team," O'Mara said. "That's been one of our expectations every year, to win a Big East championship."

The Musketeers (25-4, 13-3 Big East) are ranked a program-best No. 3 in this week's Associated Press poll . They wrap up the regular season at DePaul on Saturday.

"They came in as wide-eyed freshmen, and from the first day forward left their mark," said Mack. "They're great people. They're extremely hard workers. They're team-first guys. They've been daily soldiers. I'm going to miss them."

Musketeers fans shudder to think what might have happened if Bluiett had honored his early commitment to UCLA out of high school or decided to turn pro after testing the NBA waters each of the past two summers.

During the past two off-seasons, Bluiett worked out for the Bucks, Pacers, Pelicans and Thunder and received valuable feedback about what he needed to improve to succeed at the next level.

Bluiett later said he never seriously considered leaving Xavier early, but that wasn't until after he gave Musketeers fans a few nervous weeks.

"I think anyone that has followed our program can be in awe of Trevon's scoring ability, and how even-keeled he is down the stretch and in the moment, never too big for him," Mack said. "He's playing his best basketball in his senior year."

Bluiett's Xavier career hasn't all been smooth sailing, however.

He has had to play through ankle and shoulder injuries the past two years and has been a notoriously slow starter.

Last April, Bluiett was charged with a misdemeanor count of marijuana possession after a traffic stop in Indianapolis. The case will be dismissed in May if he completes a pretrial diversion program.

Macura who won the Big East's sixth man of the year award as a sophomore, was the only Musketeer player to start every game last season. He has started each of his 27 appearances. The only game he missed this season was on Dec. 19 against Marshall with a head injury.

Last week against Georgetown, Macura erupted for 20 points, seven rebounds and four assists. He'll be remembered most for his back-to-back 3-pointers in last year's win over top-ranked Villanova, his follow dunk at Seton Hall this year, and, of course, the dust-up with Bearcats coach Mick Cronin following the Crosstown Shootout in December.

Mack once said of Macura: "He's not afraid of the big moment, even when he should be."

"When I chose a college, I wanted to choose one that made a lot of appearances in the NCAA Tournament," Macura said. "We've gone to March Madness every single year. I want to make it to a Final Four and win a national championship. I think we can do that. We have a lot of great guys on this team. We just need to stick together."

O'Mara has been a steady presence in the post for the Musketeers, but perhaps best remembered for his game-winning layup against Arizona in the NCAA Tournament off an assist from Bluiett which sent Xavier to the Elite Eight.

Kanter, a transfer from Wisconsin Green Bay, has emerged as force off the bench, both in the post and on the perimeter. The matchup problem he creates could help Xavier in the NCAA Tournament.

Bluiett and Macura need a combined 11 points on Wednesday to become the most prolific scoring duo in Xavier's program history, surpassing Romain Sato and Lionel Chalmers who scored a combined 3,561 points from 2000-2004.

Although Senior Night often is a celebration of individual achievement, the Xavier seniors say there's too much at stake to focus on that.

Bluiett said it helps that tonight's opponent is Providence, one of only three teams to beat the Musketeers this season.

"We definitely didn't forget about the loss we took at Providence," Bluiett said. "We felt like that was one of the worst games as a collective group that we've played all year. I don't really get too emotional. It will be a bittersweet moment because you know it will be the last time you step on that floor in front of those fans."