Orange & Blue got taste of their own medicine 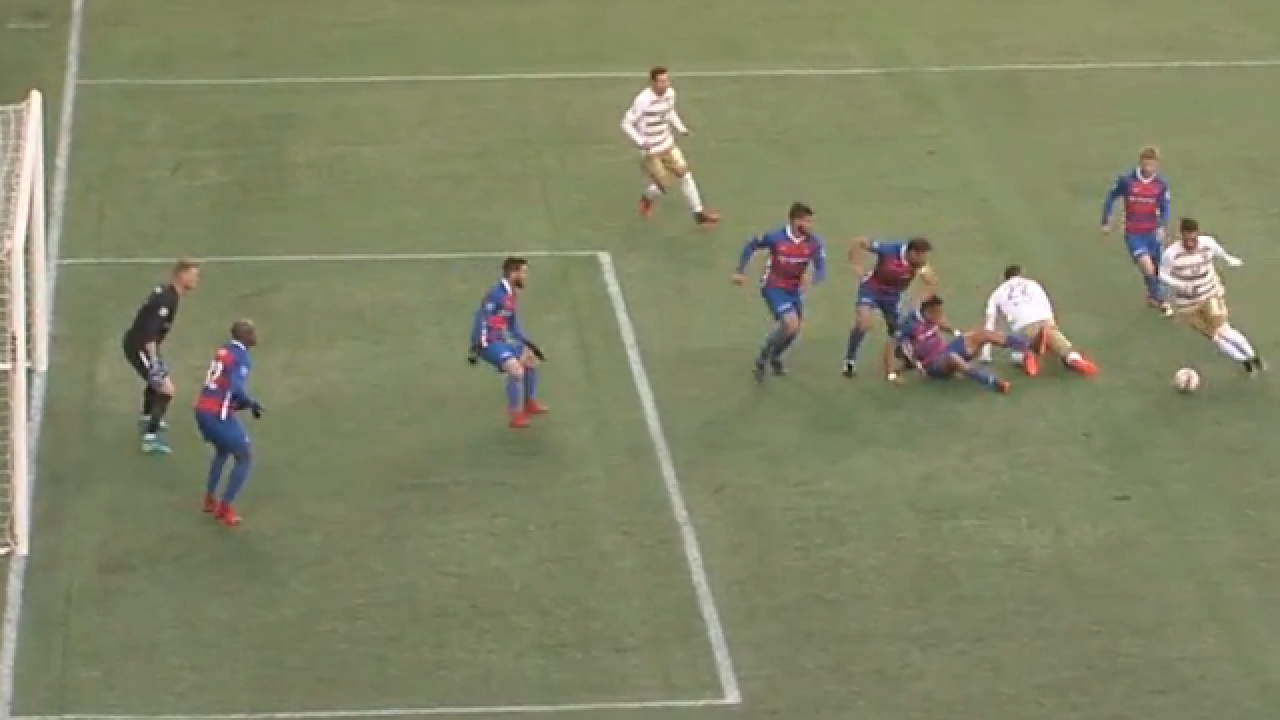 Copyright 2018 Scripps Media, Inc. All rights reserved. This material may not be published, broadcast, rewritten, or redistributed.
<p>Cameron Lancaster (far right) of Louisville City FC finds a lane in the FC Cincinnati defense before scoring the only goal of the match.</p>

CINCINNATI - It wasn’t the result Alan Koch hoped for in front of a record crowd of 25,667 for a United Soccer League home opener.

FC Cincinnati (2-1-0) gave up an early goal and couldn’t break through with an answer, dropping a 1-0 loss to Louisville City FC (3-0-0) in the River Cities Cup on a chilly Saturday night at Nippert Stadium.

The rivalry match against the reigning USL champions was played relatively tamely.

“We're disappointed to lose the derby obviously,” the FC Cincinnati coach said. "Fair play to Louisville, they are obviously a very good team. They are very cohesive team. They've played together a lot.

1. Defensive struggles: FC Cincinnati struggled leaving players unmarked in the middle of the box in the first half, and ultimately that cost it the game.

Cameron Lancaster got an open shot from about 10 yards out and easily put it past Evan Newton in the 13th minute. Throughout the first 45 minutes, there were several loose balls in the box that FCC was fortunate Louisville City didn’t put away.

Some of the problem was caused by Louisville stretching the field and finding the gaps on crosses, particularly coming up on the right side. But at times it seemed there was a disconnect between the back line and defensive midfielders Richie Ryan and Will Seymore in FC Cincinnati’s 4-2-3-1 formation.

"We were completely stretched defensively, and when you get stretched, there is all sorts of space for the opposition to play,” Koch said. “There were moments in the first 45 minutes where Louisville possessed the ball way too easily because we got stretched, and that's something we definitely need to focus on.

“I think we were a little better in the second half.”

To be fair, FC Cincinnati’s lineup had just two returning players from last year, so nine of the 11 had never played  in front of the home crowd at Nippert, which may have played into the slow start.

2. Second-half improvements:  FC Cincinnati possessed the ball better in the second half to create chances, but Louisville tightened up on defense, becoming more compact in the box with high pressure, and that made it difficult to come up with the equalizer.

When FC Cincinnati did get opportunities, players either didn’t get a good strike on the ball or were overzealous with their shots.

Emmanuel Ledesma had one in the 55th minute he likely wished he got back after sailing it way over the crossbar from close range.

The Orange and Blue switched to a 4-4-2 in the 57th minute, bringing on Danni Konig in place of Seymore and inserting Konig up top.

“I think in the second half we did better defending and turning defense into offense and creating chances, and kind of overran them with pressure and also shutting down their counter attacks,” attacking midfielder Corben Bone said.

“I think we won back a lot of balls to keep them pinned in, and unfortunately we didn't get lucky or didn't have that bit of class in the last second, or quality, to put it in the back of the net.”

3. Tables turned:  After starting the season on the road with a pair of 1-0 victories, the Orange and Blue were disappointed to have the tables turned on them.

In wins at Charleston and Indy, FC Cincinnati scored early and then sat back on defense to protect the lead. That’s exactly what Louisville did to Cincinnati.

The Orange and Blue obviously needs to learn how to come from behind, but considering the talent brought in this offseason, what is probably most surprising is the club’s inability to better possess the ball from the get-go and build the attack with creativity.

The wider field at Nippert, compared to what the team saw on the road, should have helped, but instead Louisville was the team better able to take advantage of the space.

"That's what is disappointing,” Koch said. “What we've gone out and done to other teams was done to us tonight. It's something we have to learn from.

“We're a new team. This is our third game. So, to expect no ripples at this stage of the season would be very unrealistic. We're in an excellent position with six points out of nine,” Koch said, “but this is good for us to happen to us early.”

Will Seymore was the only new player in the lineup from the past two games, replacing Kenney Walker, who sustained a concussion at Indy last weekend and is “touch and go,” according to Koch.

The 26-year-old appears to be a capable player, but he doesn’t have the experience of Walker (a former MLS player who has been with FC C since the inaugural season in 2016), and it showed Saturday.

Seymore and Ryan didn’t seem to be on the same page, which led to some of the open opportunities for Louisville. But look for the newcomer to contribute more as he grows comfortable with the group.

Emmanuel Ledesma, a former English Championship League player, had one of the best runs of the night, beating his defender up the middle on a counter attack and then dishing off to Bone on the left side.

Bone got a decent strike, but the shot was saved and then cleared off the goal line by Paco Craig in the 25th minute.

Ledesma is considered to be a player that can open things up in the attack and create some chances. He was 64.4 percent accurate with his passes in Louisville’s half of the field.

RELATED: Rush is on to get City Council, school board approval for stadium in West End