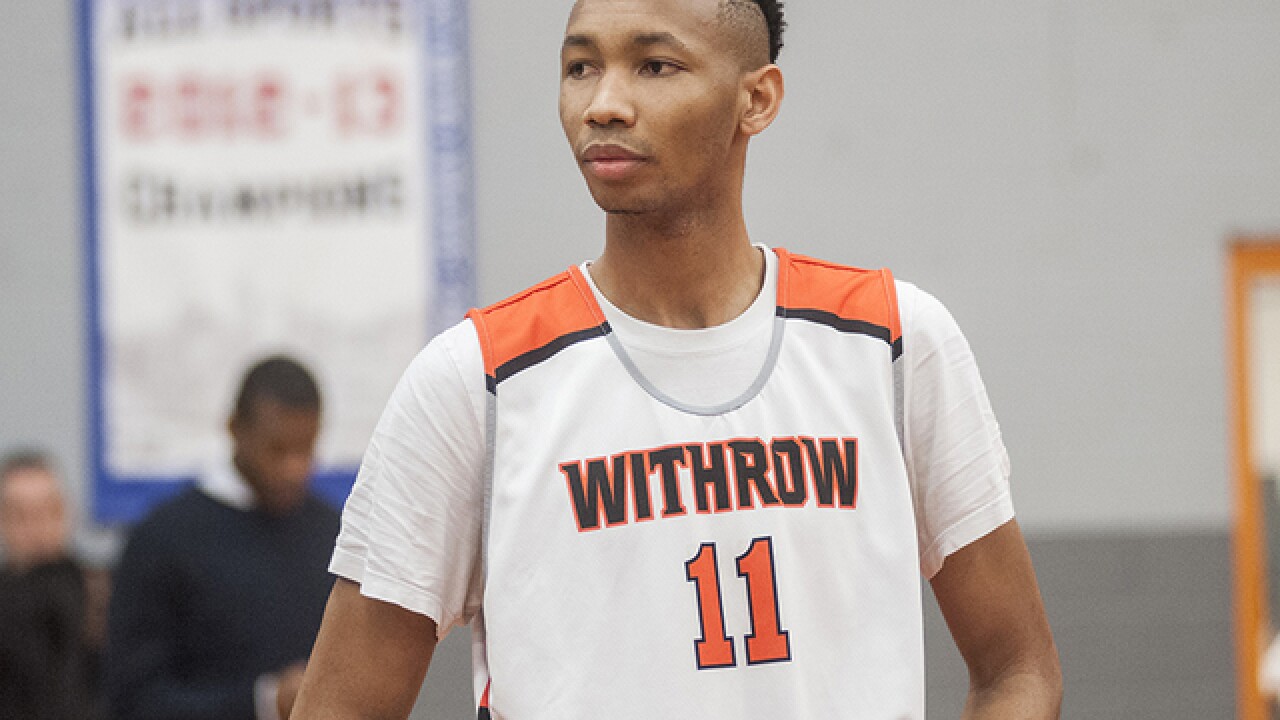 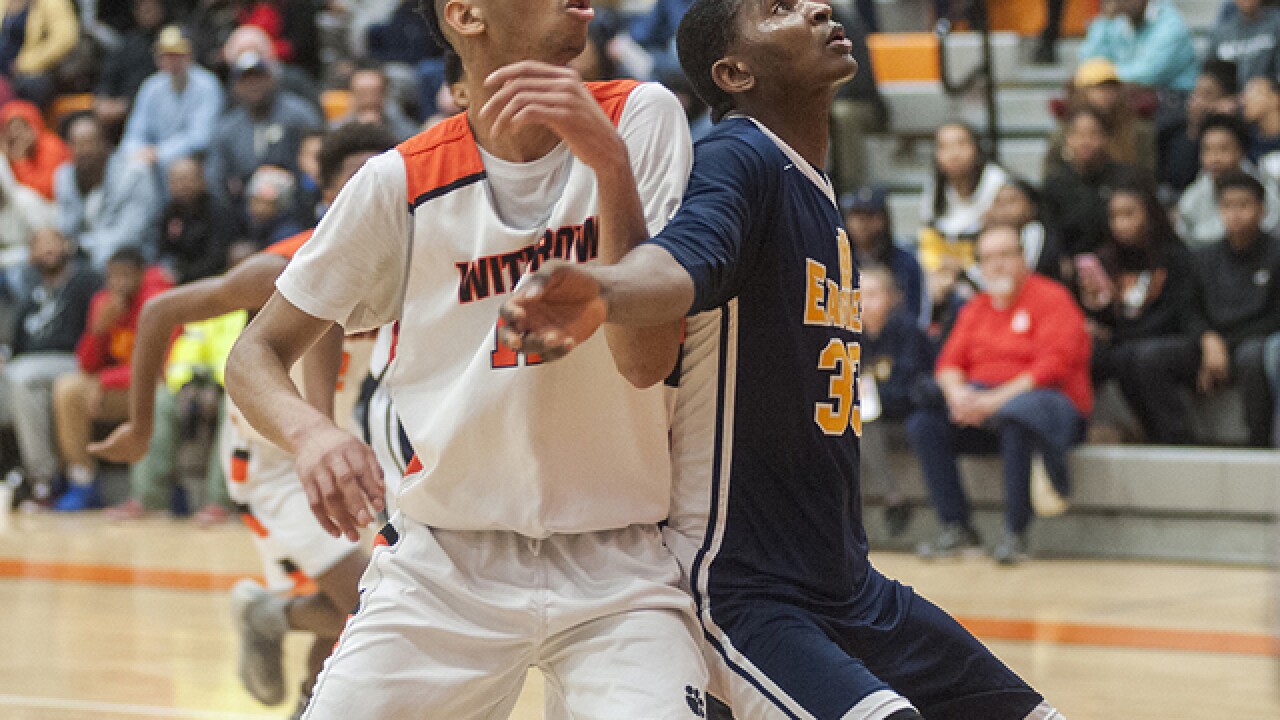 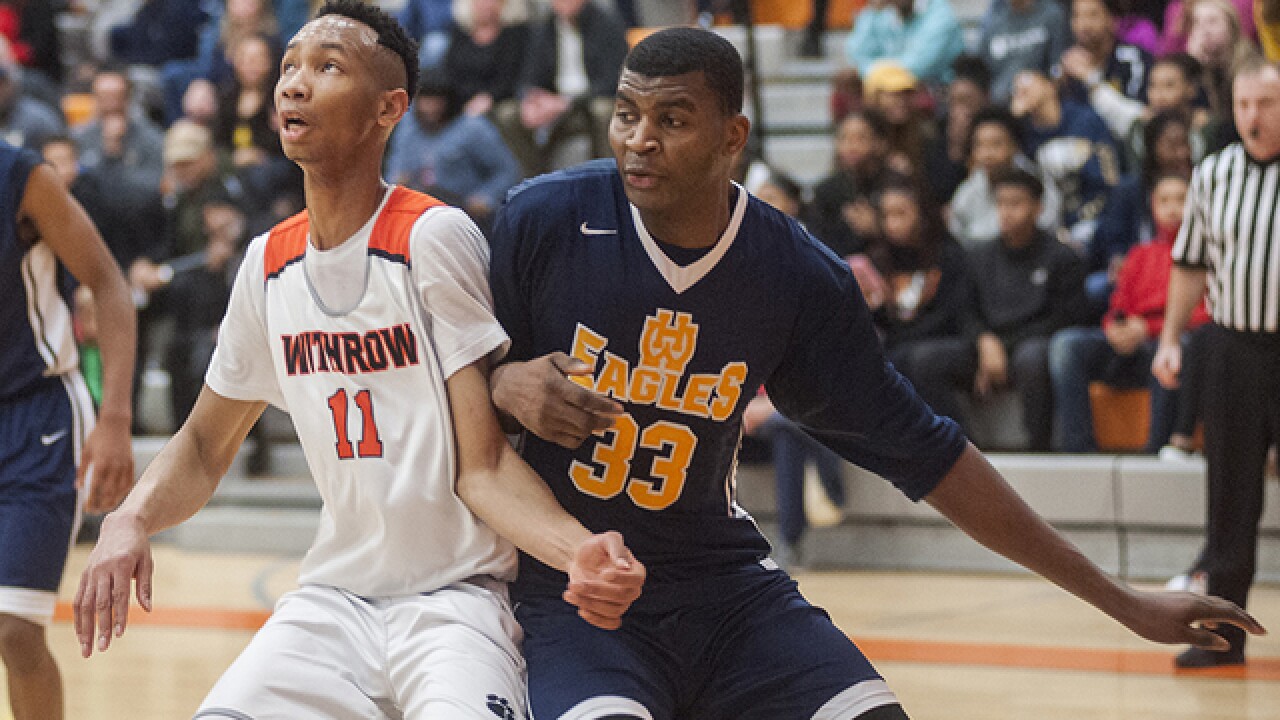 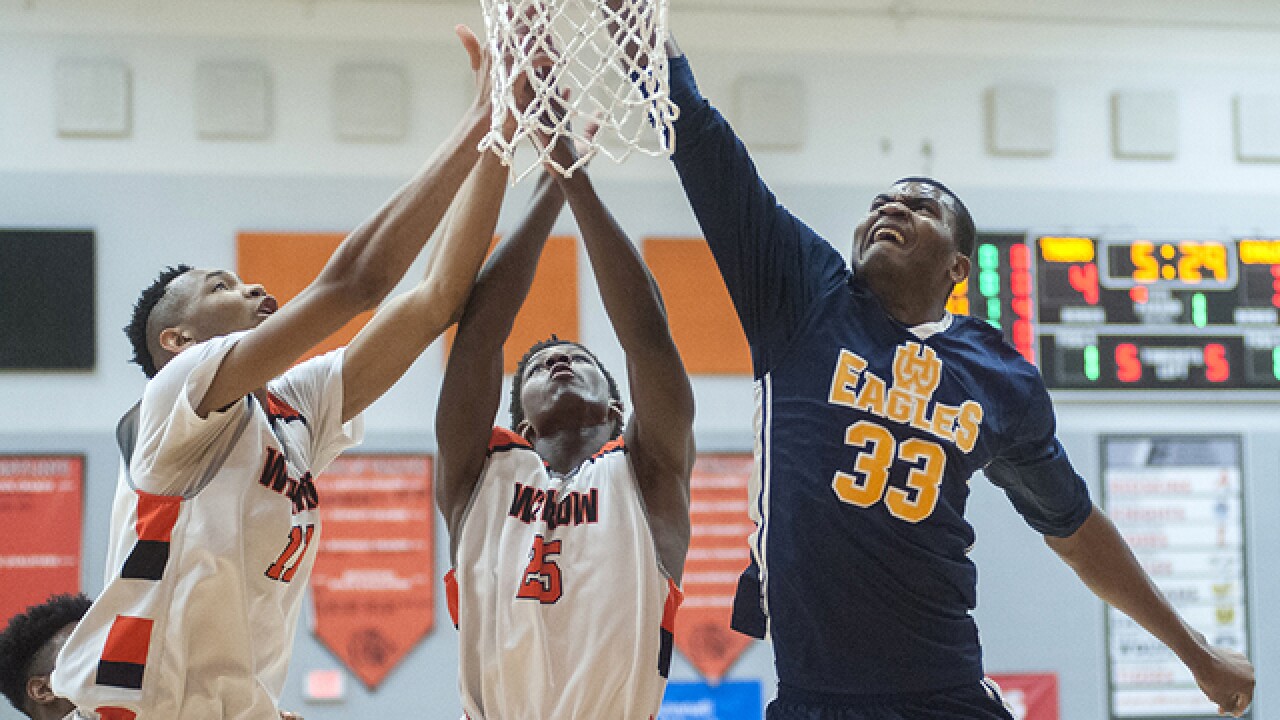 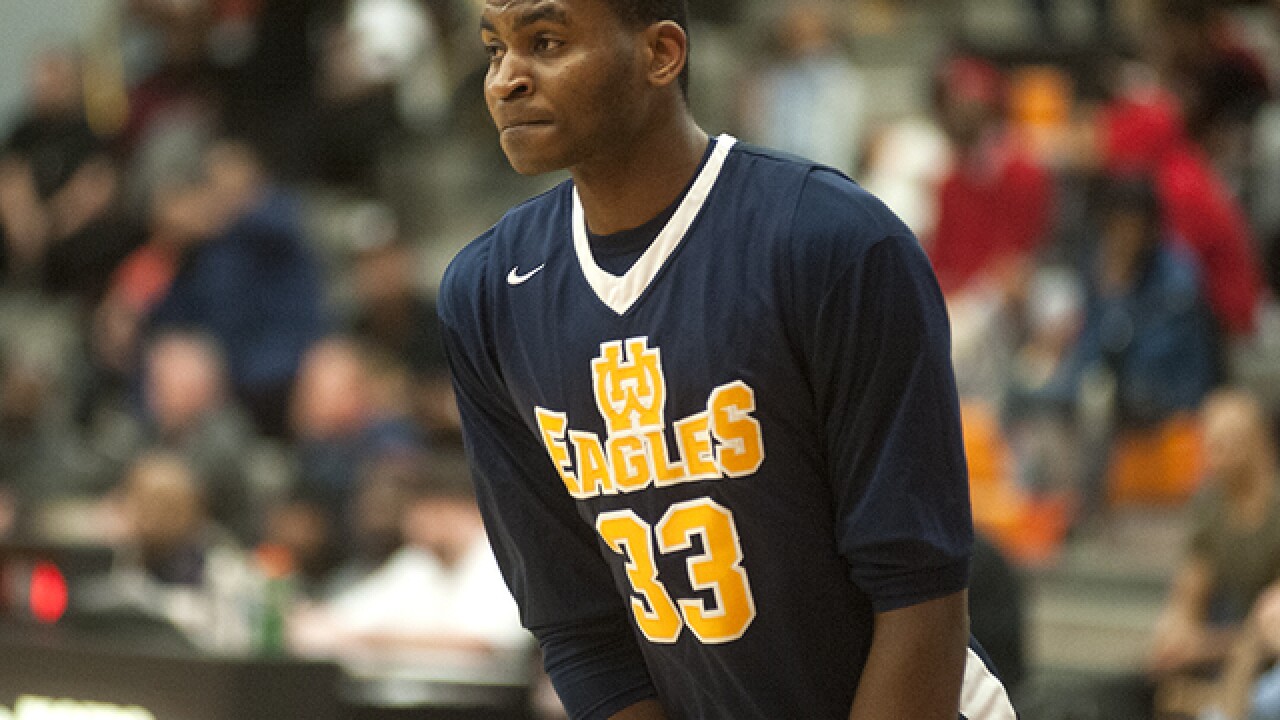 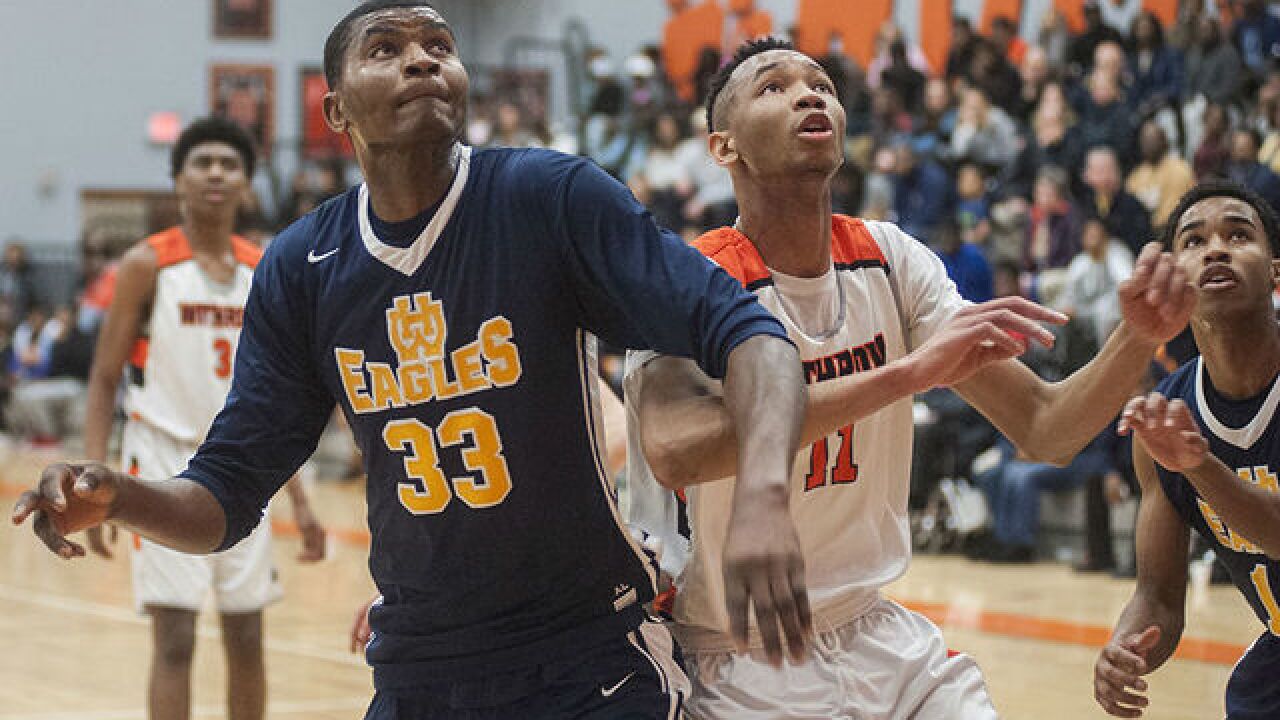 The Walnut Hills 7-foot-1 senior center couldn’t help but think how enjoyable this winter night had been.

Walnut Hills held host Withrow to just two points in the third quarter as the Eagles defeated the Tigers 45-23 in a heavily anticipated Eastern Cincinnati Conference game between the neighborhood schools.

For Nwankwo, who wears a size 17 shoe, the game also carried a deeper personal significance.

It was an opportunity to play against his brother, Withrow junior 6-11 center Abba Lawal .

The brothers, who live in Walnut Hills, were a bit nervous before the game but soon settled into a rhythm on both ends of the floor.

The younger Lawal got the opening tip uncontested. But the matchup had just begun.

Nwankwo (pronounced Nu-Wan-Wo) followed that up with a nice entry pass from the top of the key at the other end of the floor.

Twenty-seven seconds later, the brothers were matched up on the baseline and Nwankwo was hit with a pushing foul on Lawal.

“They’ve known each other for a long time,” Walnut Hills coach Ricardo Hill said. “They know each other’s game. Both of them are real similar.”

Lawal and Nwankwo arrived in the United States through the Ejike Ugboaja Foundation. The foundation has provided Nigerian athletes with educational opportunities since 2006. Henry Ugboaja is the players’ father and the brother of Ejike, who was drafted by the Cleveland Cavaliers directly from Nigeria in 2006.

Lawal and Nwankwo played soccer as youngsters. They picked up a basketball nearly the same time in 2014. Basketball has become a path to college.

Lawal, 17, formerly played at Walnut Hills as a freshman in 2015-16 before he transferred to Withrow. The brothers lived in Delaware during the 2016-17 school year.

Lawal, who had eight points Tuesday night, has had scholarship offers that include Cleveland State, Akron and Toledo along with interest from the Horizon League and other Mid-American Conference schools.

“This offseason will be big for Abba,” Withrow coach Shaun O’Connell said. “…He’s got to get some weight on him. But he likes to lift. I am confident that we will be able to get some muscle on him. Once he gets physically stronger, I think the sky is the limit.”

Nwankwo, who is listed at 7-1 and 220 pounds, is still learning the game but has been a rim protector whose focus is on improving his offense. He had five points, 14 rebounds and five blocks Tuesday.

“Zubi’s athleticism is incredible,” Hill said. “He can pick up the ball from the free throw line and dunk it with one step.”

Nwankwo, 19, has a soft touch from the mid-range game and that was evident Tuesday night. The Walnut Hills coaching staff has worked with him on catching the ball and learning offensive principles.

Nwankwo enjoys working out until 9 p.m. some days when no one is around or as early as 7 a.m. Saturday.

“I love getting a rebound and blocking shots,” Nwankwo said.

Nwankwo’s dream is to play college basketball. Hill said it will happen.

“He’ll have his choice,” Hill said.

Gibson had a game-high 23 points to lead the Eagles (13-2, 9-0 ECC). He has interest from Temple, Winthrop, Furman and Miami University among other programs.

“Kam is one of the top players in the state,” Hill said. “He is going to be just like (former Walnut Hills standout and UNC Asheville guard) MaCio Teague . All the Ohio schools will miss out on him. The kid is high character, high ACT score and a great competitor. It’s crazy they are not on him like they should be. We have too many Ohio schools that are missing out.”