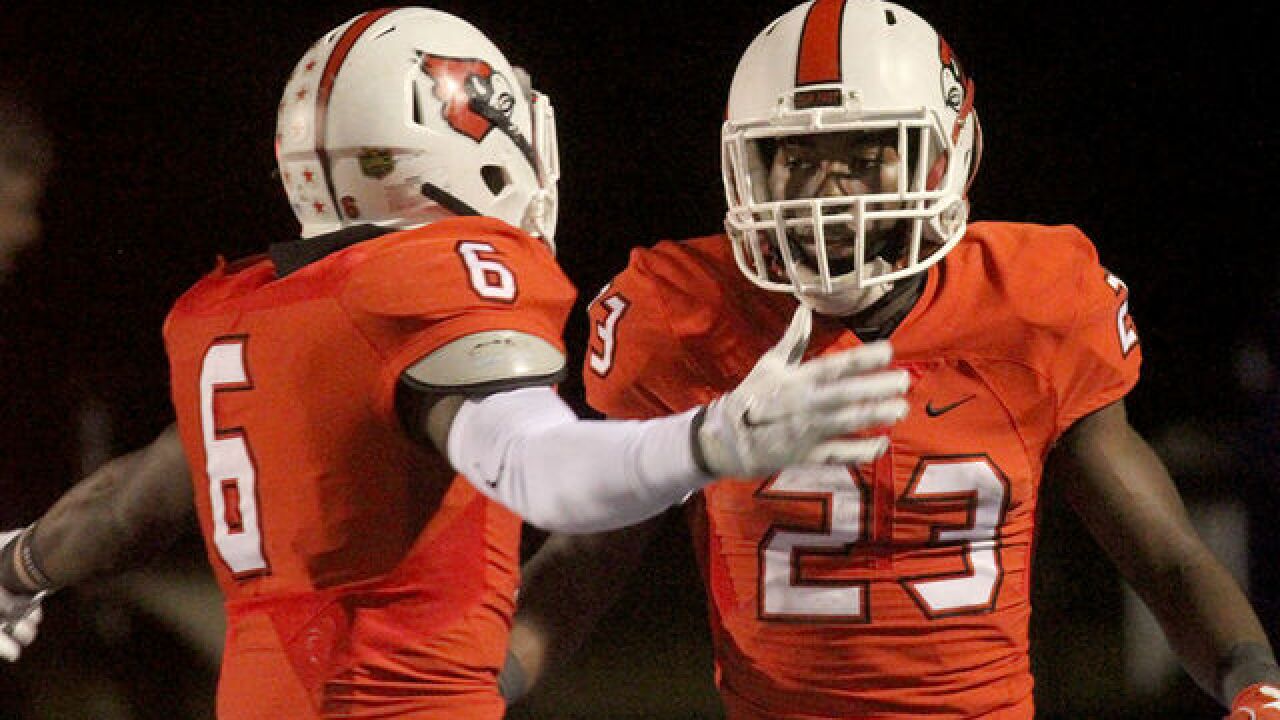 Copyright 2018 Scripps Media, Inc. All rights reserved. This material may not be published, broadcast, rewritten, or redistributed.
<p>Colerain senior quarterback Deante Smith-Moore (left) and senior running back JJ Davis are among the leaders of the Cardinals' offense this season. Colerain defeated La Salle 23-0 in the season opener Aug. 24. Colerain and La Salle - separated by just four miles - won't play in 2019. (WCPO file photo)</p>

COLERAIN TOWNSHIP, Ohio – For about two hours on Sunday nights this summer, JJ Davis and some of his Colerain teammates could be found at Cardinal Stadium.

Senior quarterback Deante Smith-Moore would work on his passing and timing with Davis and other running backs and receivers while defensive backs challenged them during this makeshift scrimmage.

“It was definitely a good workout,” said Davis, a senior running back.

Davis, who rushed for 1,038 yards and eight touchdowns and had 17 receptions for 264 yards and four touchdowns last season, said his receiving ability has improved. But the voluntary workouts among the players also helped them become closer as teammates.

“We all help each other no matter offense or defense or sophomore or senior,” Davis said. “We all want to get better and I think that is what is going to help us this year.”

That chemistry has been significant for the Cardinals (11-3), who were a Division I state semifinalist in 2017 .

“I just feel like we got so close last season and we all know what it takes to get there,” Davis said. “We got a lot of experience. So I feel this is the one. We just have to bring it all together and work hard. If we put it all together I think we have enough talent and just raw athleticism to beat anybody.”

Colerain, which opens the season against visiting La Salle Aug. 24 in the Skyline Chili Crosstown Showdown , may be on the path for a very special season.

The Cardinals have four of the first five games at home, too. The Cardinals, winners of 18 consecutive Greater Miami Conference titles, are ranked No. 1 in the TriStateFootball.com Division I Preseason Rankings and heavily favored to win the GMC again this season.

Colerain has all the ingredients to be in Canton in December. And they've turned the page on 2017.

“Obviously making it to the Final Four last year -- we were extremely disappointed in turning the ball over five times and the outcome of that game,” Colerain coach Tom Bolden said. “I told them, 'We’ve got all we need. We just got to stay healthy and take care of the football.' So they know what I mean when I say we’ve got all we need. We’re not going to hide from it. Like the kids say, I am going to keep it real with them. If I think we’re talented enough to win it all I will let them know. If I don’t think we’re playing like we can win it all then I will let them know that, too.”

Bolden may not discuss the future at length with his players at this point of the preseason, but area football fans, coaches and opposing players know how much talent Colerain returns.

The Cardinals have senior running back/linebacker Ivan Pace Jr., who rushed for 17 touchdowns and nearly 1,000 yards. He recorded two sacks and had 65 tackles on defense.

Colerain also returns senior running back/defensive back Syncere Jones, who led the team in receiving and scored eight touchdowns. He had two interceptions and over 40 tackles.

“Whether it’s the fullback, the quarterback or me or Syncere – anybody has a chance to take one from 70 or 80 yards,” Davis said. “It’s something special. It makes it much easier to block when you only have to block a guy for a second.”

Smith-Moore, who has played quarterback in some capacity since 2015, ran for over 700 yards and five touchdowns in 2017.

“He’s as tough as nails and a great leader,” Tom Bolden said.

The Cardinals will be strong upfront with the likes of offensive linemen Rusty Feth (Miami University commit), Ace Ehrenschwender and TJ Gonella.

Feth, who lives two minutes from the school, said the energy this summer is infectious. Feth lost 10 pounds from last season and is more mobile at 6 feet, 5 inches tall and 310 pounds.

“I love representing Colerain and getting some dubs for everyone,” Feth said.

Senior safety Jakari Patterson (two interceptions, two forced fumbles and over 40 tackles) returns along with senior outside linebacker Eric Phillips, a University of Cincinnati commit who is 6 feet, 4 inches tall and 280 pounds. Junior safety Deshawn Pace is another player to watch in the secondary.

Senior kicker Chris Mangold was an all-state selection in 2017 and set a school record with 13 field goals. Tom Bolden said the football explodes off Mangold’s foot.

“He’s a weapon – there is no doubt about it,” Tom Bolden said.

Colerain is ranked No. 5 nationally among teams from the past 15 seasons based upon schedules and results in a cumulative outlook, according to MaxPreps partner Ned Freeman at CalPreps.com.