Tax reform winners and losers? Some Cincy firms could be both

'You're going to have to look at the details' 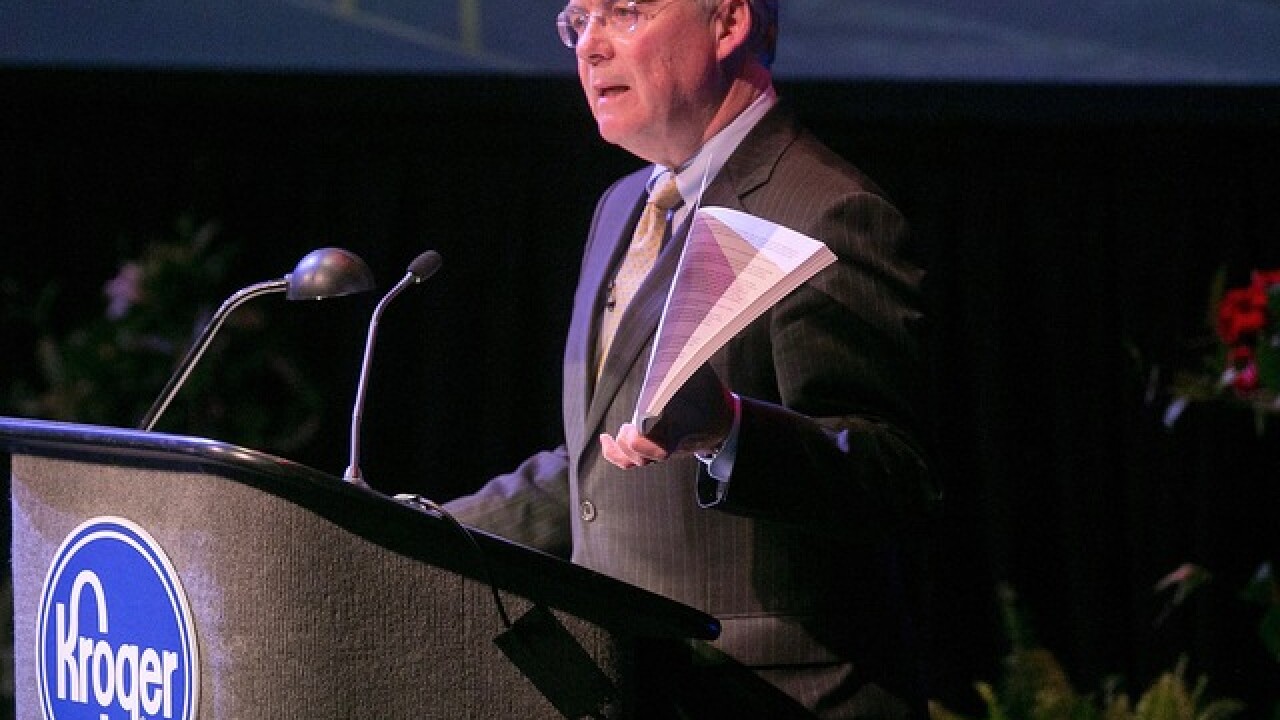 Copyright 2017 Scripps Media, Inc. All rights reserved. This material may not be published, broadcast, rewritten, or redistributed.
Jim Calloway
<p>Kroger CEO Rodney McMullin holds a copy of the Kroger 2016 Annual Report during the annual meeting of Shareholders Thursday, June 22, in Cincinnati.</p>

CINCINNATI - The Kroger Co. is likely to save more than $200 million a year under the latest version of GOP tax reform. CEO Rodney McMullen told Wall Street analysts last week that Kroger will spend the money on jobs, wages and dividends.

Car dealer Jeff Wyler sees it pretty much the same way for all those designated as winners in the Republican revamping of the U.S. Tax Code.

“It’ll put more money in the hands of people to invest or spend. I mean, they’re not just going to put it under their mattress,” said Wyler, CEO of the Jeff Wyler Automotive Family, with 16 dealerships in Ohio, Kentucky and Indiana.

“I don’t think it’s a win-lose scenario,” he added. “It’s what is good for the economy.”

Wyler and Kroger are both in sweet spots under tax rules passed by the Senate Saturday, which lower the U.S. corporate tax rate by 15 percentage points and allows family-owned companies like Wyler’s to shield more of their income from taxation.

But how much they’ll actually benefit from tax reform is far from certain, said Dan Fales, a shareholder on the tax team at Clark Schaefer Hackett.

“This is not a tax simplification bill by any stretch,” Fales said. “This bill, you’re going to have to look at the details.”

For big companies like Kroger, for example, there seems to be a clear advantage from the GOP’s plan to reduce the U.S. corporate tax rate to 20 percent. Kroger declined to provide details about the impact of tax reform, but its annual report shows it paid $557 million in income tax last year. After deductions and tax credits, it paid an effective tax rate of 32.8 percent. Kroger would have paid $217 million less with the GOP’s 20 percent rate.

But there remains some uncertainty for Kroger as the House version takes effect next year while the Senate plan would wait until 2019. And President Donald Trump told reporters Saturday that the corporate tax rate could end up at 22 percent.

Tax reform is even more of a mixed bag for multi-national companies like Procter & Gamble Co. It paid federal income taxes of $1.5 billion last year with an effective tax rate of 23.1 percent. Lowering that rate to 20 percent would deliver $205 million in savings to P&G. But other pending changes could take away that gain.

For example, P&G has $49 billion in accumulated offshore profits that it has yet to bring back to the U.S. Both the House and Senate approved similar language imposing two levels of tax on offshore profits, 14 percent for cash and other liquid assets and 7 percent for money that was reinvested into overseas business units.

Spokeswoman Jennifer Corso said P&G  won't "speculate on the impact" on the impact of tax reform because "details currently being worked out by Congress are going to matter very much." But P&G told WCPO last September that about $11 billion in overseas profits are held as cash. The rest has been reinvested.

That means the company would face a $4.2 billion tax bill under GOP reforms.

RELATED: Why $49 billion in P&G earnings never returned to U.S.

“If you look at a P&G, they truly are a global company,” Fales said. “If they’re earning money in Japan, and there is no compelling reason to bring the money back to the U.S. for operations, why should they be paying taxes on that money in the U.S.?”

The outlook is even murkier for privately held companies like Wyler’s. It’s been widely reported that the GOP tax plan is super friendly to corporate entities that “pass through” income to owners instead of paying their taxes at the corporate level.

But Fales said the House and Senate approaches differ considerably and both come with strings attached. The House plan, for example, allows a 25 percent tax rate on S corporations, LLCs and other closely-held businesses. That’s a big reduction for owners whose business income puts them in the maximum U.S. tax bracket of 39.6 percent for individuals. But the code also limits to 30 percent the amount of business income that can be taxed at the lower rate. Plus, the bill imposes a 2.9 percent self-employment tax on business owners for the first time.

“Those pass-throughs are not going to get near as big a break as the press has been saying,” Fales said. “Under the House rules, you’d only get the reduced rate on 30 percent of your income, while 70 percent would be taxed as ordinary income.”

So, even as critics of GOP tax reform lampoon the pass-through changes as a windfall for the rich, Clark Schaefer Hackett is urging its clients to look for ways to avoid pass-through income.

Wyler said he is waiting for a final version of the bill before exploring how the pending changes will impact his enterprise. He figures his children will benefit from proposed reductions in the estate tax. The House plan would repeal it in 2023. The Senate plan would preserve the tax but double its exemption so only estates worth more than $11 million would pay it.

Wyler will also benefit from a special rule for car dealers, allowing them to deduct “floor plan interest expense” when they borrow money to purchase inventory. A last-minute change by the Senate preserved the rule that was already in the House-passed tax bill.

Wyler said his dealerships typically carry 100 cars worth a combined $30 million. While interest rates are relatively cheap now, they’re rising. He’s seen rates of up to 20 percent in his 30-year career.

“When the rates move up two points and you’ve got $30 million in inventory, that’s $600,000,” he said. “Is it fair that we can deduct interest on inventory that Walmart can’t? I don’t know. I just know that particularly with smaller dealers, it can be fatal to them” if they can’t offset the interest with tax deductions.

Will the rule survive a House-Senate conference committee and be signed into law by President Donald Trump? Wyler doesn’t know that either. But he does know this:

“There are 16,000 car dealers in the country,” he said. “Every one of them knows their Congressman.”