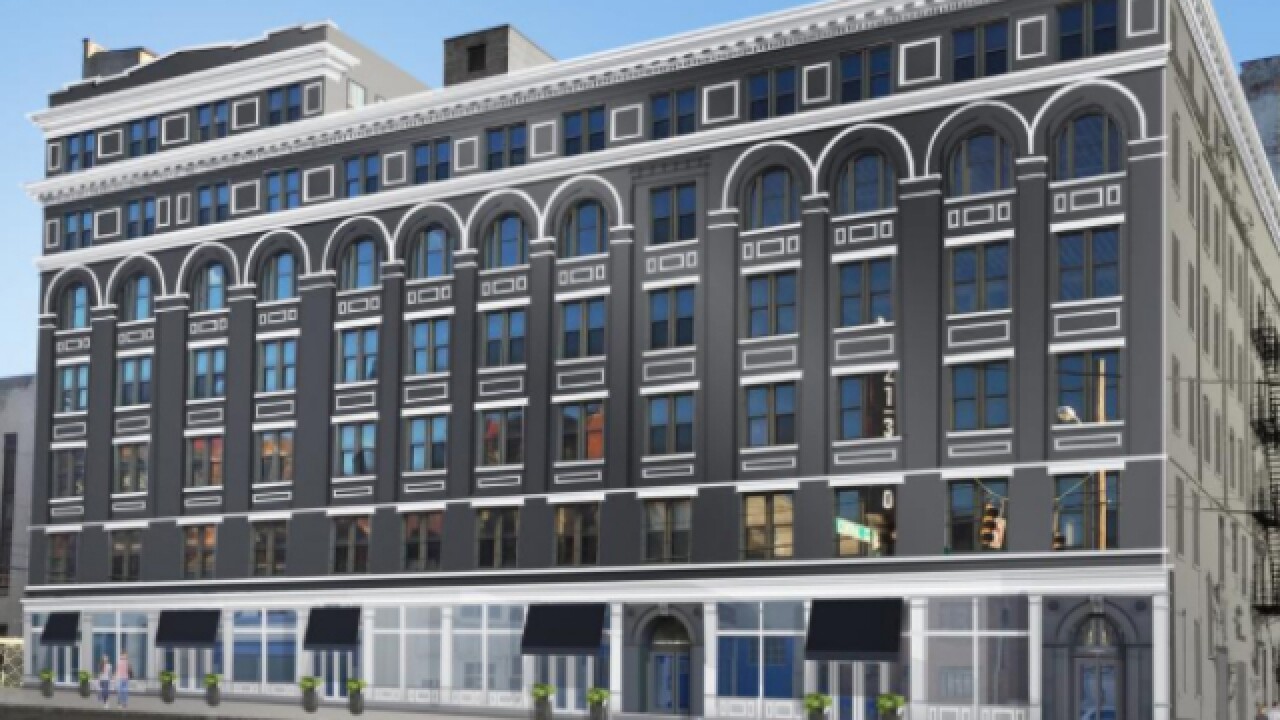 <p>Rendering of the Strietmann Building, located in Over-the-Rhine, post-renovation, which will include a large solar panel roof to provide the building with the bulk of its energy needs. (Provided)</p>

CINCINNATI -- The sun is shining on Over-the-Rhine.

Metaphorically, it's old news for the burgeoning Queen City neighborhood, which has seen dozens of development projects over the last several years. But one developer is taking the phrase literally, by including a state-of-the-art solar-paneled roof in one of its upcoming redevelopment projects.

OTR-based developer group Grandin Properties announced that it will rehabilitate the old Strietmann Biscuit Building -- located at the intersection of 12th Street and Central Parkway -- into a seven-story office and retail space. Part of the rehab will include rooftop solar panels that will generate nearly all the power necessary to keep the building lighted and heated.

The rehab will also include structural improvements to the aging building.

The solar panels will cost about $600,000 to install and will stretch across roughly half of the roof's surface and are expected to generate about 60,000 kilowatt hours annually. For comparison, the average single-family home used about 11,000 kWh in 2015, according to data compiled by the U.S. Energy Information Administration.

It's part of what Grandin founder and CEO Peg Wyant described as Grandin's efforts to develop Cincinnati's urban neighborhoods into a more sustainable network.

Wyant, who unveiled the project during a news conference last week, said the project represents an investment in the city's future generations. Speaking to reporters with her out-of-town grandchildren by her side, she said, "(They) asked me, 'Well why would you schedule this for a day we're in town, when we could be at the park or something?' And I said, 'Well, I scheduled it today because we're doing it for you.'"

It's a trend City Councilman P.G. Sittenfeld, who also spoke at the news conference, said he hopes other developers follow and the city administration can incentivize.

"This is a huge win not just for the neighborhood, but for sustainable development across the city," he said. "To have a developer take a historic, beautiful building and make it state-of-the-art -- that's what we're looking for."

The Strietmann building has a rich history: The Strietmann Cracker Company first constructed the building in 1899 -- when Central Parkway still served as the Miami and Erie Canal -- to house production of various snack food items, including the still prominent Zesta cracker brand.

At its height, the company had a reputation for taking a role in bettering the neighborhood, with one 1922 review of the company describing it as built "on a foundation of optimism and the belief that the world was getting better."

The building was largely abandoned by the early 1940s, when the company relocated to Mariemont. Since it has provided storage for the nearby Wegman Company, and most recently made its big-screen debut as the headquarters for the New York Times in the Hollywood film "Carol," starring Cate Blanchett and shot in Cincinnati in 2015.

Sittenfeld said the sustainability approach is a vital part of Cincinnati's continuing efforts to woo new businesses and talent to the region.

"Talent responds to culture," he told WCPO. "Sustainability is part of that culture that is appealing to talented people we want to draw to Cincinnati. It's fitting that this building will most likely be filled with cool, hip and in some cases new businesses."

Wyant said the new offices and retail spaces will create about 400 new jobs.

Wyant, whose offices sit on Race Street across from Washington Park, has gained a reputation for investing in urban, walkable neighborhoods. Other recent Grandin projects have included the $2 million renovation of the historic Hogan Building, located on Republic Street in OTR, into 12 luxury apartments. Grandin also owns developments in Mount Adams, Hyde Park and Covington's historic Licking Riverside district in Northern Kentucky.

"I think it's fair to say that Grandin and Peg are leading the way in terms of commitment to solar, along with HGC," the construction firm that will install the panels, said Sittenfeld.

He said, while there are historical tax abatements available for projects like this, there are none available that incentivize solar energy projects.

"We've been nudging the administration to come up with concrete incentives for solar," he said.