Production crews like to use local companies
Posted: 7:00 AM, Oct 10, 2017
By: Vickie Ashwill | WCPO contributor 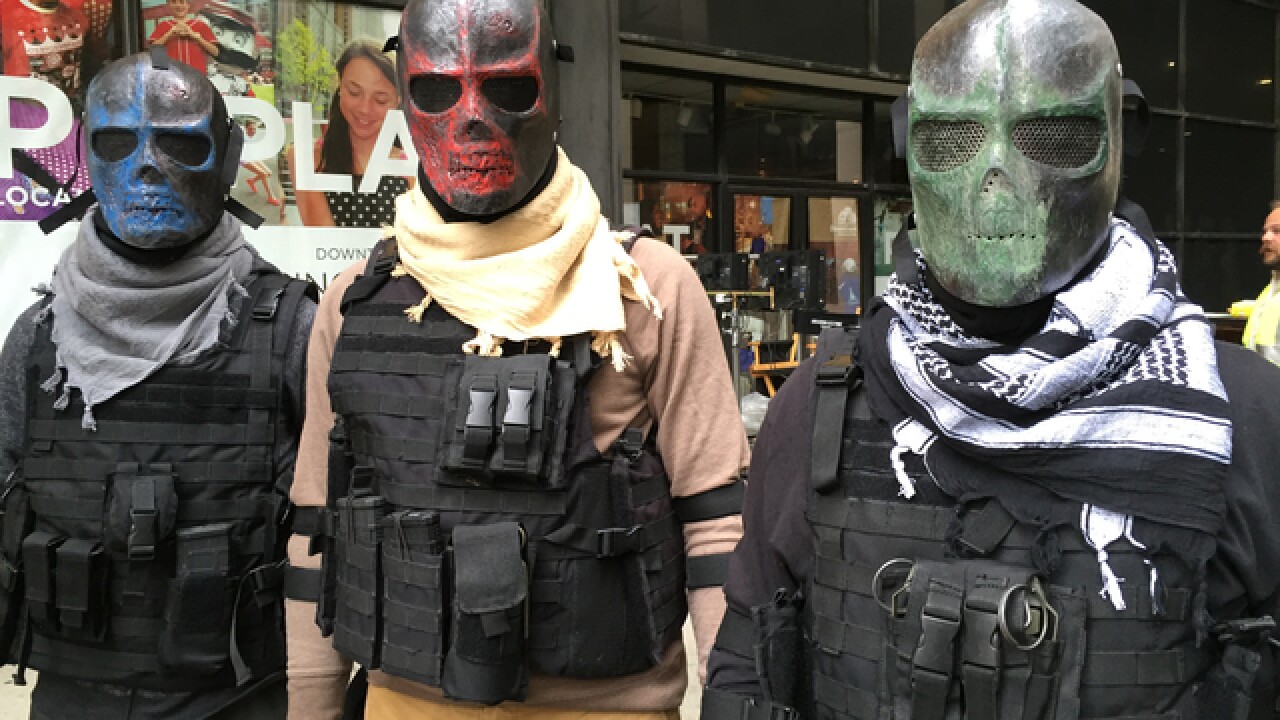 Copyright 2017 Scripps Media, Inc. All rights reserved. This material may not be published, broadcast, rewritten, or redistributed.
Provided
<p>Robbers in "Marauders" wear costumes from the Costume Gallery in Newport. (Photo provided by Joy Galbraith, Costume Gallery)</p>

Joy Galbraith can rattle off at least seven movies made in Cincinnati, Northern Kentucky and Columbus where her costume expertise made her money.

Galbraith, owner of the Costume Gallery in Newport, is one of the small Northern Kentucky business owners continuing to draw in cash from the region's film industry. It's made a big difference in her bottom line.

She's not alone. Movie industry crews seek local businesses to help with production, from costumes to embroidery to towing cars to the restaurants where the stars and crews eat their meals.

"It’s an influx of income that gives you a boost," Galbraith said.

And union wages are a boon to her company.

"Carol" was Galbraith’s first break into the business in 2014. In the following three years, she got a union card (and benefits), met a famous Hollywood costume designer and got a hug (and a selfie) from none other than Arnold Schwarzenegger. Since then, she has done everything from designing costumes to tailoring to being on set. She even taped a fake blood pouch, called a squib, under an actor’s shirt in preparation for a shooting scene.

Galbraith also recommended Ball Embroidery when the production company for "Old Man and the Gun" wanted names and movie logos attached to the back of director chairs.

Since that recommendation, Jan Ball, owner of the Bellevue business, has embroidered upward of 75 director's chairs, some of which have been shipped across the country.

The prop manager for that movie continues to be a contact for them, she said. He told her that he might not remember the town, but he would remember her work.

"We have since done four more movies," said Ball. "It's pretty great to get the recognition."

Although they weren't invited to be on set, they did watch Robert Redford and others during filming in Newport from her other business, Albert's Uniforms, in Newport.

Bev Holiday, community liaison coordinator for Newport, said production companies like to go to small businesses because they know they can get approvals in a timely manner.

Galbraith credited the state tax incentives, which encourage companies to shop and use services in the state.

Holiday, who represents the city in helping movie companies make connections, said one company had to tow a car that wouldn't start. Later, they needed a tow for a scene in Covington and asked her to connect them with Fenders.

"Now, I know they'll use Fenders when they are in the area," she said.

And, although it's not long-term, trickle-down business includes eating at local restaurants, such as crew lunches at the Wooden Cask in Newport, late nights at the Anchor Grill in Covington (a favorite of Emilio Estevez) and a wrap party at Newberry Bros. Prohibition Bourbon Bar, said Kristen Erwin Schlotman, executive director of Film Cincinnati.

That wrap party for "Inconceivable" helped make a pretty good week for the Prohibition Bourbon Bar at Newberry Bros. last Halloween weekend, Kim Newberry said. It's a difference that is keeping the business open this Halloween weekend.

In Newberry's case, she and her husband, Peter Newberry, met one of the producers while at Mount Adams Bar & Grill in Cincinnati and got the party booked that way.

Marketing Northern Kentucky is part of Film Cincinnati's regional approach, Schlotman said. They are working to have more Kentucky members on the board. Schlotman also said local business leaders and government officials have helped make things happen across Northern Kentucky, from finding the right location for a scene to establishing connections.

Business folks say it's fun, but there's hard work as well -- and short turnarounds. Galbraith said one of her most challenging costumes was replicating a Chanel couture suit from the 1980s for "Surviving Compton." The detailed tailoring, wide shoulders and limited timeframe was tough, she said. She also took a current men's suit and restyled it into rockabilly style for the "Old Man and the Gun."

"They wanted it in 24 hours," she said. "That was the most difficult."

As for Galbraith's friendship with Schwarzenegger?

"He was really nice," she said. "We had long conversations about Austria and the woolen coats they make. And he ate with the crew."

He's the one who asked for the selfie, she said, and he called her one of the hardest workers he knew.