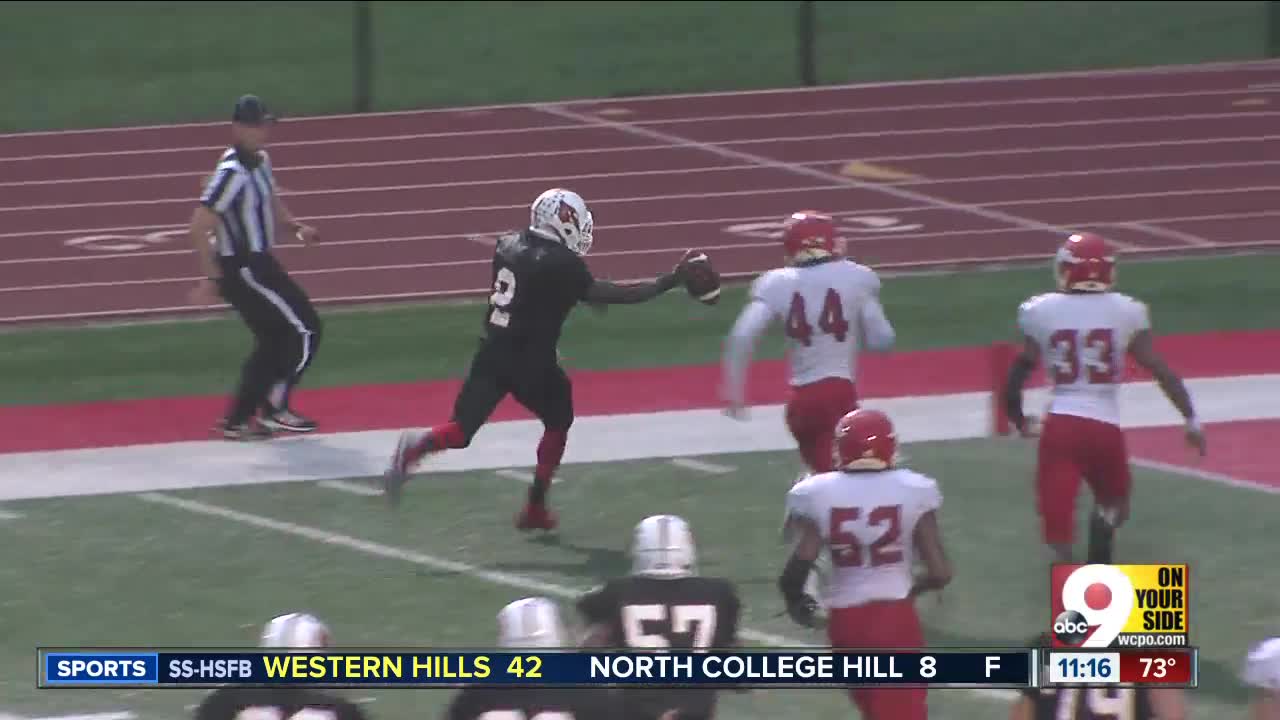 Watch the best high school football highlights in town hosted by WCPO Sports Anchor John Popovich and Sports Reporter Keenan Singleton. We covered the top games in Ohio and Kentucky as well as some small-school battles you won’t see anywhere else. Watch the video player above for top plays from Wyoming vs. CHCA, Colerain vs. Princeton, Elder vs. Clarkson North and Covington Catholic vs. Kings. Watch the video player below for Mason vs. Oak Hills, Sycamore vs. Lakota West, Simon Kenton vs. Dixie Heights and Lloyd vs. Marion County. 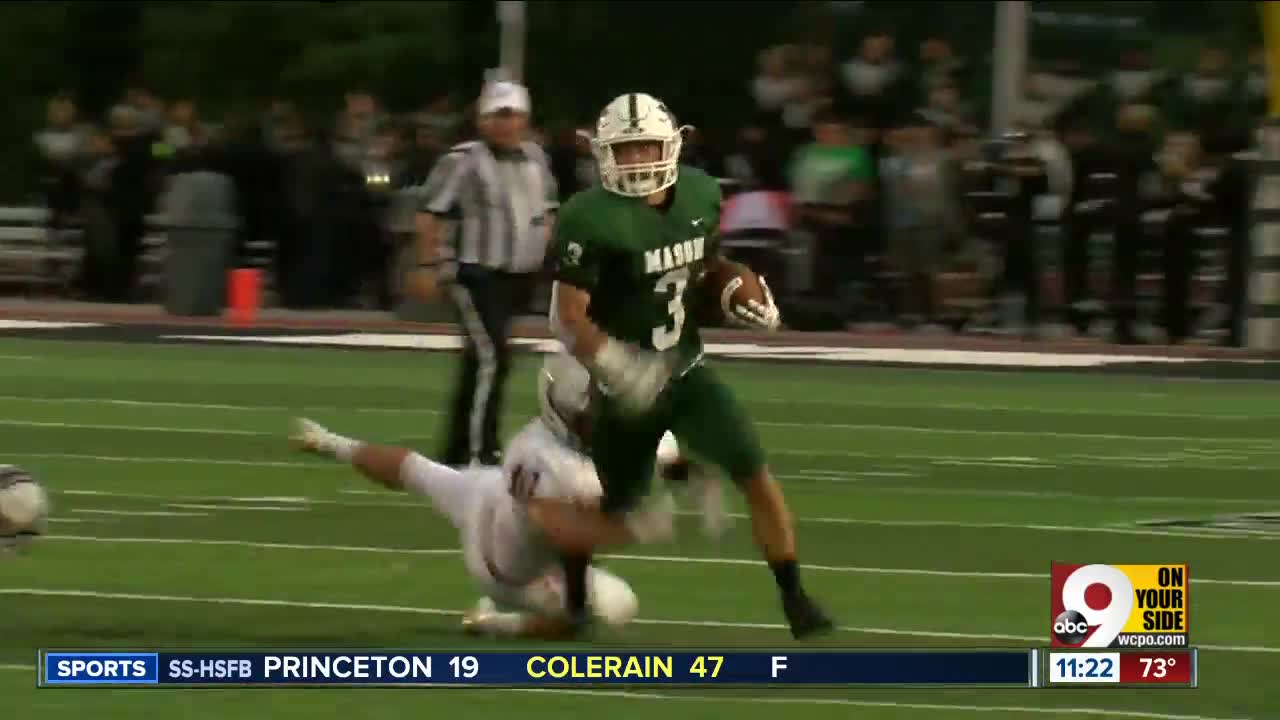 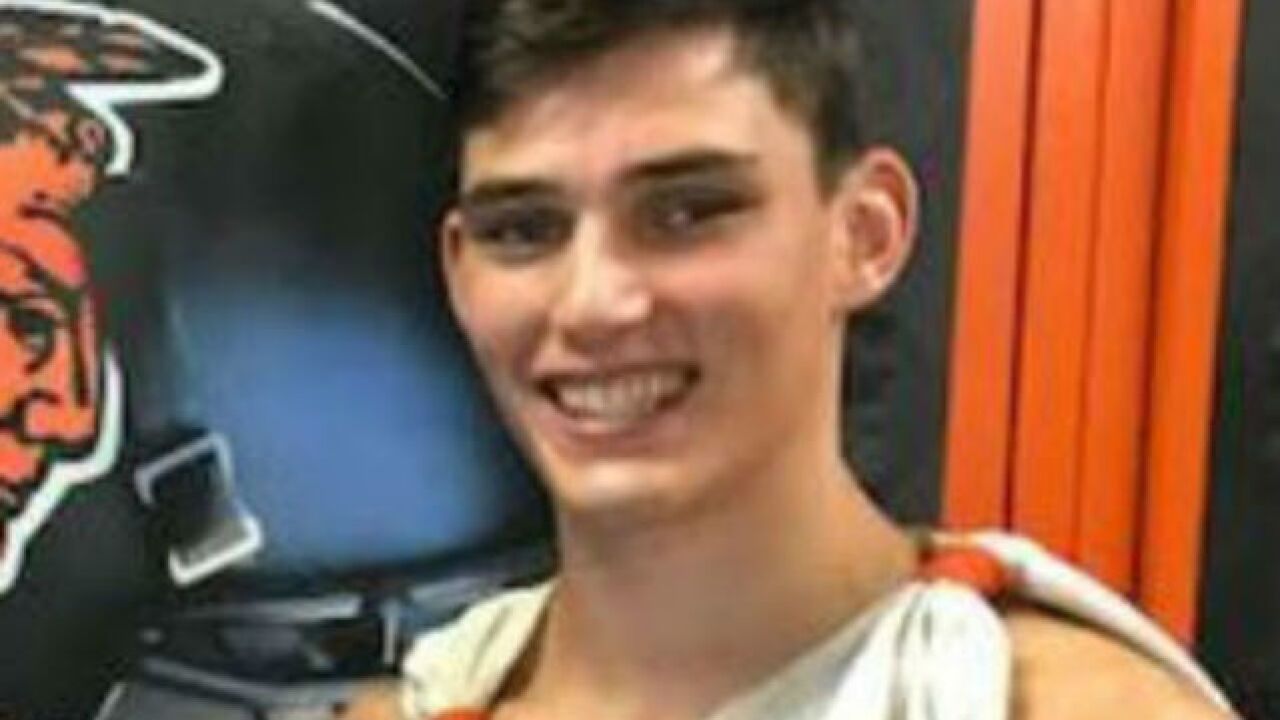 CINCINNATI – The Anderson football team graduated a record-setting quarterback and plenty of other skill players from the 2017 squad.

But the Redskins are certainly picking up from last season’s success and are 3-0 for the second straight year.

"David played well and distributed the ball well in the conditions," Dreyer said. "He has improved day by day."

Thompson, who listed at 6 feet 3 and 185 pounds, has thrown for 910 yards and 10 touchdowns through three weeks. He is the successor for former standout quarterback Jay Volpenhein, who threw for 7,930 passing yards for his career.

Anderson led Harrison 14-3 at halftime before Thompson found senior Joey Newton for a 39-yard touchdown connection and then senior Eric Curless for a 73-yard score in the third quarter.

Harrison made a 27-yard field goal at the 9:54 mark of the second quarter for its only points.

Anderson plays at Kings (2-1) to open the Eastern Cincinnati Conference schedule next week.

Winton Woods junior running back Miyan Williams had 20 carries for 260 yards and four touchdowns in the Warriors’ 52-45 win at Upper Arlington, according to This Week News. Warriors coach Andre Parker told WCPO early Saturday morning Williams set a school record with a 99-yard touchdown run. Winton Woods had 31 points in the second quarter as it led 38-24 at halftime. Both teams had 14 points in the fourth quarter. “All my hair fell out,” Parker told WCPO.

Catch him if you can

Thunderhawk in the end zone

Lakota East senior running back Jack Dobrozsi had 127 yards rushing and four touchdowns to lead the Thunderhawks past host Middletown 32-7.

A shutout for the Warriors

Mariemont improved to 3-0 with a 34-0 win over Shroder. Senior quarterback Wally Renie was 11 of 18 passing for four touchdowns. Mariemont plays at Finneytown next week.

Welcome to The Cage

Colerain senior quarterback Deante Smith-Moore had 25 carries for a career-high 235 yards and five touchdowns in the Cardinals’ 47-19 win over visiting Princeton in the GMC opener for both teams. The five touchdowns is tied for the most by a Colerain player in a game, according to Cardinals coach Tom Bolden. Colerain (3-0) plays host to Middletown (1-2) Sept. 14.

St. Xavier senior linebacker Nathan Arthur had three sacks in the Bombers’ 41-7 win at Walnut Hills. Arthur had 10 tackles for the night. He has 30 tackles, 4 ½ sacks and a forced fumble this season. St. X (2-1) plays at Indianapolis Cathedral Sept. 14.

Colerain is ranked No. 24 nationally by the MaxPreps Freeman Rankings (computer). The season’s first Associated Press statewide media poll will be released at noon Sept. 10.

The Ohio High School Athletic Association’s weekly computer points standings will be released Sept. 18 for all seven divisions. Those points standings are a reflection of playoff positioning up until the final weekend of the regular season. The final standings will be released Oct. 28. ...Wyoming junior quarterback Evan Prater plans to visit Ohio State today. Prater has multiple football offers including UC, Pittsburgh, Akron and Toledo. He also has a basketball offer from Wright State.