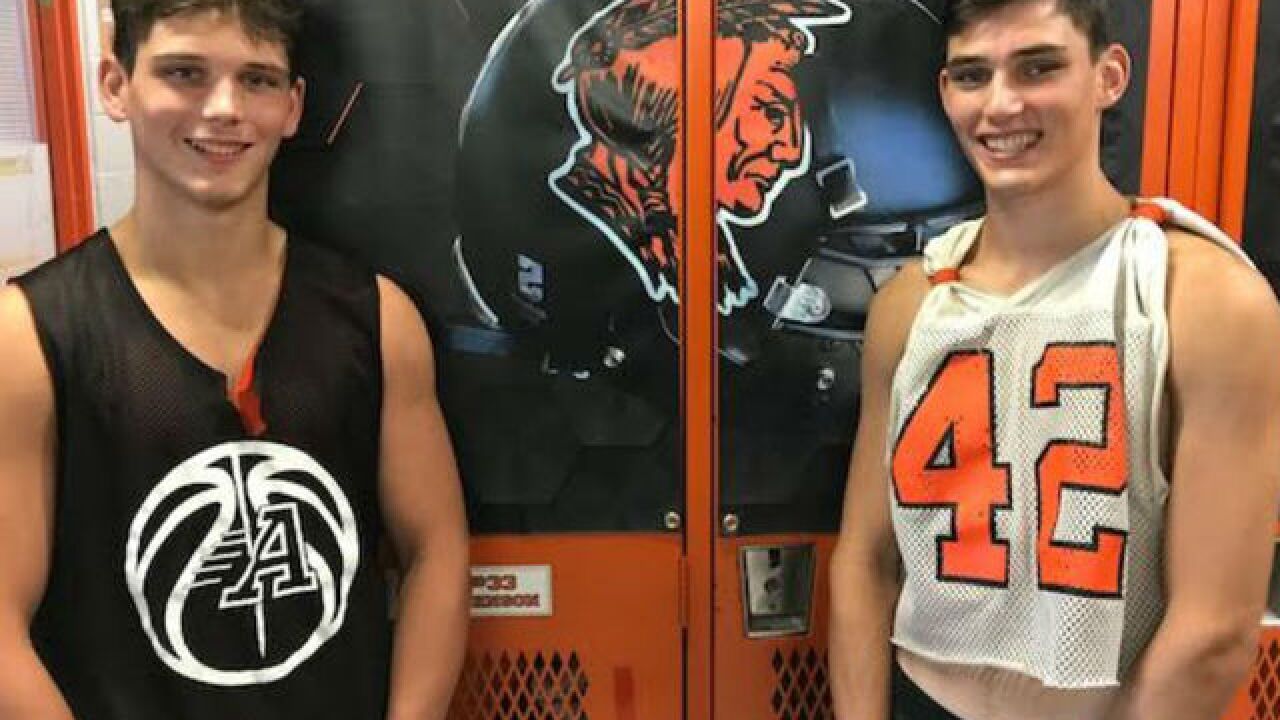 Copyright 2018 Scripps Media, Inc. All rights reserved. This material may not be published, broadcast, rewritten, or redistributed.
<p>Anderson junior defensive lineman Cameron Curless (left) and his brother, senior wide receiver Eric Curless, have used football as a positive catalyst for their lives on and off the field. (Photo by Mike Dyer)</p>

ANDERSON TOWNSHIP, Ohio – Eric Curless used to sit in his room on Friday nights and listen to the Anderson High School football games across the street.

“We grew up in that house over there,” the Anderson senior wide receiver said, pointing across Forest Road. “Literally, Anderson has been our whole life, honestly.”

Cameron and Eric have lived across the street from the stadium since they were 3 and 5 years old, respectively. Anderson football is an integral part of the brothers' lives.

“When I am sitting there on a Friday night…I will watch them play football and I’ll hear ‘Curless after Curless’ on the PA,” Brad said last week. ‘Cameron Curless with a tackle and Eric Curless with a touchdown.’ That’s rewarding. It makes me feel like 10 feet tall.”

Brad, a carpenter, received guardianship of the brothers in late December 2017 after his father, Don, died. Brad’s mother, Marlene, is in a nursing home.

Don and Marlene adopted Eric and Cameron after they had been in foster care after the death of Todd, the boys’ biological father, in 2006. Lisa, the boys’ mother, lives in Oxford.

Football has been instrumental in helping to keep the brothers on track. The brothers take a great deal of pride in the Redskins’ program.

Anderson coach Evan Dreyer said Eric and Cameron boost the morale among teammates in the locker room and are impact players.

"Football is like an everyday thing," Eric said. "You have to be committed for the full year. You have to keep a straight face.”

Eric, who is 6 feet 2 and 190 pounds, has a scholarship offer from Cincinnati Christian University and is receiving NCAA Division II interest.

Cameron, who is 6 feet 2 and 185 pounds, shows up for extra workouts on Fridays and has excellent potential on the defensive line, Dreyer said.

“Brad has done a great job of raising them,” Dreyer said. “He’s supportive. He’s reached out to me to make sure that I am holding them accountable - that they are not allowed to miss or do anything just because of what has happened to them in their life. I love anybody who is parenting or mentoring young children to give them that. To make sure that we are supporting our kids but we are giving them support and discipline that they will need for the rest of their life.”

The brothers share a room until their sister, Angela, a 2018 Anderson graduate, moves to Ohio University this fall. The brothers also wear the same sized clothing and work at Coney Island.

“Their character has been incredible for what they’ve been through,” Dreyer said. “I’m very proud of how they’ve used football and they’ve used school, especially Anderson High School, to make them better people and better student-athletes.”

Sharon Curless, the boys’ aunt and Brad’s sister-in-law, has been instrumental in their guidance. Sharon is always there for the brothers whether they need to talk or have an errand.

“It’s been amazing watching them grow and watching who they’ve become,” Sharon said. “…They love life.”

Love gets everybody through anything, Brad said. He’s very proud of his sons but also of the Anderson community that has supported them.

When Don Curless died in December, the family received a large package on their porch with gift cards from the community. Brad still doesn’t know who exactly put it together.

“It was something else,” Brad said as his voice trailed off. “That tore me up.”

Dreyer said his coaching staff wants to build character in their young men. The coaches can be tough at times, but they want the best for their players. He's seen the maturity in the brothers.

Eric and Cameron have aspirations of playing college football. They are also grateful for the perspective they’ve gained through high school football and family support.

“I want them to be happy,” Brad said. “I don’t care what you do in life as long as you are happy. If you want a goal you have to work toward that goal.”

Anderson opens the season against Mount Healthy at 7 p.m. on Thursday, Aug. 23 at Princeton. Anderson opens at home against Hamilton Aug. 31 at 7 p.m.