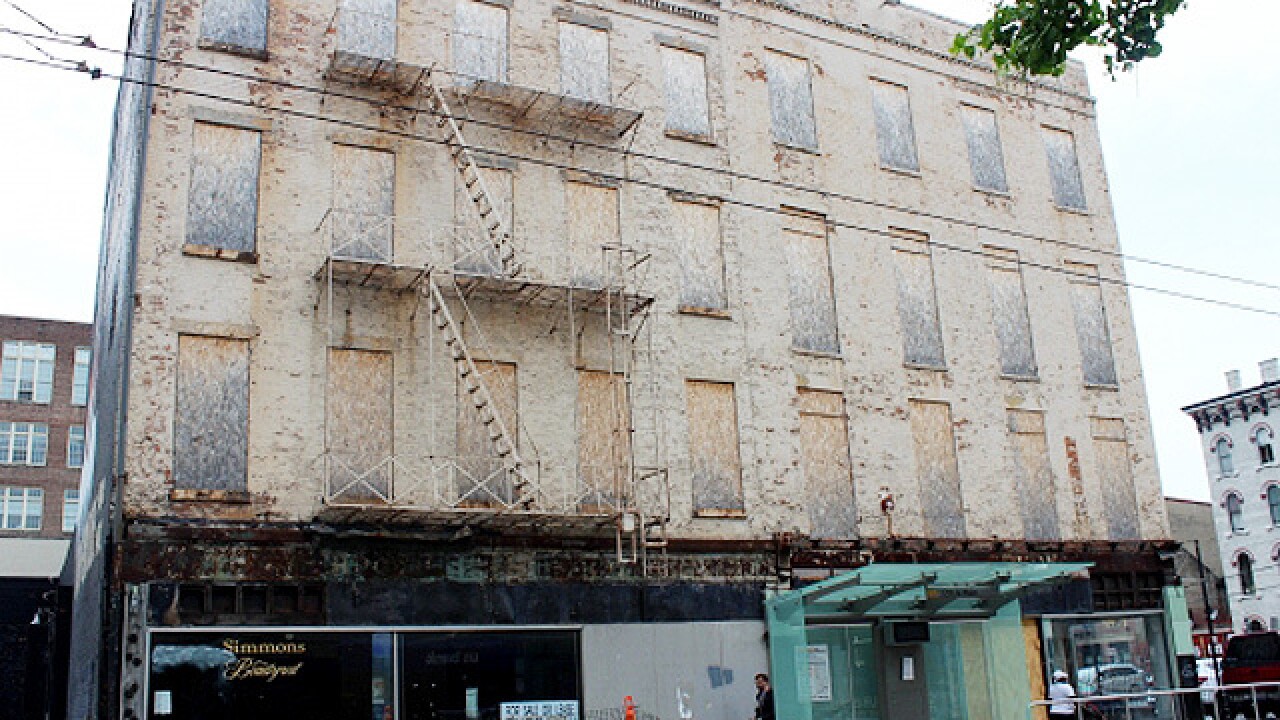 <p>Before the Vine Street-centered redevelopment of Over-the-Rhine, Davis Furniture marked the southern end of the Main Street entertainment district. Its owner wants to demolish the two-building structure, but the city so far has denied permitting it. (Greg Paeth for WCPO)</p>

This is the second of three stories on the redevelopment of historic buildings in the Tri-State.

CINCINNATI — You don’t need a degree in historic preservation, architecture or engineering to determine which buildings in Over-the-Rhine need work.

Although hundreds of millions of dollars have been invested in an effort to resuscitate a neighborhood that seemed to be breathing its last gasps, 15 minutes of OTR sightseeing makes it clear that millions more are needed to broaden the revival of a neighborhood that has been on the National Register of Historic Places since 1983.

Some of OTR’s biggest challenges — and splashiest projects — are either complete or at least on the drawing board.

The $135 million revitalization of Music Hall is slated to begin in June, and the $11 million renovation of Memorial Hall is underway and scheduled for completion in the fall. The rebuild of Washington Park, a project that cost about $47 million, was completed four years ago and seems to have been a catalyst for new vitality in the neighborhood.

If, however, you’re one of those people who considers a crumbling Victorian that needs $200,000 worth of rehab “an opportunity,” you’re still in luck. Over-the-Rhine is brimming with possibilities for people who want to invest some money and aren’t reluctant to create some sweat equity.

The nonprofit Over-the-Rhine Foundation, whose mission is to “preserve, protect and celebrate” the neighborhood, has warned that roughly half of the 3,157 buildings that existed in 1930 have been leveled in a neighborhood that is one of the largest urban historic districts in the country. In 2006, the entire neighborhood made the National Trust for Historic Preservation’s list of the “Eleven Most Endangered Places in America.”

Preservation Ohio, based in Columbus, makes it clear that a variety of factors can contribute to the loss of a building. Those factors include the threat of demolition, abandonment, a neglectful owner, dilapidation, obsolete use, lack of money for repairs, out-of-the-way location or encroaching sprawl.

Although it could be argued that the entire Over-the-Rhine neighborhood should be on our SOS — Save Our Structures — list, that seems a bit unwieldy. To make it a bit more manageable, we’ve asked some knowledgeable people in Cincinnati and to tell us about nine OTR buildings that need a life preserver, and as soon as possible:

1. Grammer’s (1440 Walnut St.): One of Cincinnati’s oldest bars and restaurants has a history that dates back to 1872. The Walnut Street institution, once known for its authentic German food, has been open off and on for 140 years, most recently as a restaurant in 2012. Much of the historic interior remains intact, including the bar, according to the Cincinnati Preservation Collective.

“In late 2014, Grammer’s was included in a larger development plan known as ‘Grammer’s Gateway’ proposed by the owner of the property, Martin Wade of Rookwood Pottery,” according to the collective. That plan called for the $75 million redevelopment of many of the properties around the 1400 block of Walnut Street. It also recommended the partial demolition of Grammer’s. That plan seems to have been put on hold, the collective said.

2. 468 Dayton St.: This half of a duplex near the border between Over-the-Rhine and West End is being sold by OTR Adopt, which focuses on finding buyers who will acquire “deteriorating historic buildings … and contribute to OTR’s renaissance by ensuring that these abandoned buildings are rehabilitated to productive use.” Margo Warminski, preservation director for the Cincinnati Preservation Association, identified this building as one that needs help sooner rather than later.

3. Wielert’s Café (1410 Vine St.): The café opened in 1873 and once had a block-long beer garden — the largest in the city — behind it. HGC Construction, which has tackled other projects in Over-the-Rhine, received permits to do some work on the property earlier this year. But Paul Moran, director of marketing for HGC, said the project is on hold right now and that he could not provide any information about what a developer has discussed for the building. He did say that the “mythology” of the building is fascinating and that plenty of important decisions about the city were made at Wielert’s.

Boss George B. Cox ran Cincinnati for a quarter century from a table at Wielert’s, and the players in 40-piece orchestra that performed in the beer garden became the core of the Cincinnati Symphony Orchestra.

4. Davis Furniture (1119-1123 Main St.): Some 25 years before anyone began to give serious thought about redeveloping Vine Street in Over-the-Rhine, a three or four block strip of Main Street north of Central Parkway was the heart of Cincinnati’s nightlife district. For those cruising north on Main, Davis Furniture was a landmark, kind of the Brandenburg Gate to the land of tequila sunrises and pina coladas.

Now there’s a battle over its future because the owners have asked for permission to demolish the building. John Blatchford, a co-founder of the preservation collective, has identified the building as one that his organization will fight to save. Cincinnati’s Historic Conservation Board voted in November 2014 to deny the owner’s request to demolish the property, but the fight isn’t over.

5. 1925 Vine St.: Near Vine’s intersection with Clifton Avenue is this anchor to the northern gateway of Over-the-Rhine, according to OTR Adopt. The organization describes the house as a “double-barreled, bay-windowed Italianate (that) is one of the largest historic structures in the neighborhood, with potential for up to 15 units of rental housing. The property includes a rear parking area, backyard and city views.”

6. 1921 Vine St.: Yet another property OTR Adopt is alarmed about, it's just a stone’s throw from 1925 Vine. The organization describes this building as one of the “Three Sisters” row of historic homes on upper Vine Street and “… is a great candidate for redevelopment as a single family home. The compact size lends itself to a manageable renovation budget, and a rear roof deck with views over the historic district helps make this a truly unique find for Over-the-Rhine.” The “Three Sisters” are small identical homes that are side-by-side just south of a much larger building, 1925 Vine.

7. 100 Findlay St.: At the intersection of Findlay and Race streets, this narrow and deep building is just a half-block from Findlay Market, one of the magnet destinations in OTR that doesn’t depend on hefty beer sales. Warminski is alarmed about this building because there appears to be a structural problem with the two-story bay on the Race Street side of the building. She believes this high-visibility building needs immediate attention.

8. 1121 Dayton St.: Another Dayton Street property Warminski is concerned about. She said it appears to be deteriorating as a result of severe neglect. Real-estate websites say the two-story brick dates to 1885 and that it has about 3,200 square feet of space, which includes three bedrooms and two baths. One advantage: no through traffic. Dayton Street ends abruptly a couple hundred feet west of I-75.

9. 517 W. McMicken St.: Another property being marketed by OTR Adopt. The organization’s property description says the structure, “situated along one of Cincinnati's most intact historic streetscapes (is a) … two-family frame in OTR's Brewery District. The building has undergone substantial interior demo and cleanout, making for an easier transition to full construction. The property could be rehabbed for use as a single-family or up to three units of rental housing.”

Next: Top 9 endangered buildings around the Tri-State