By: Lucy May , Tanya O'Rourke 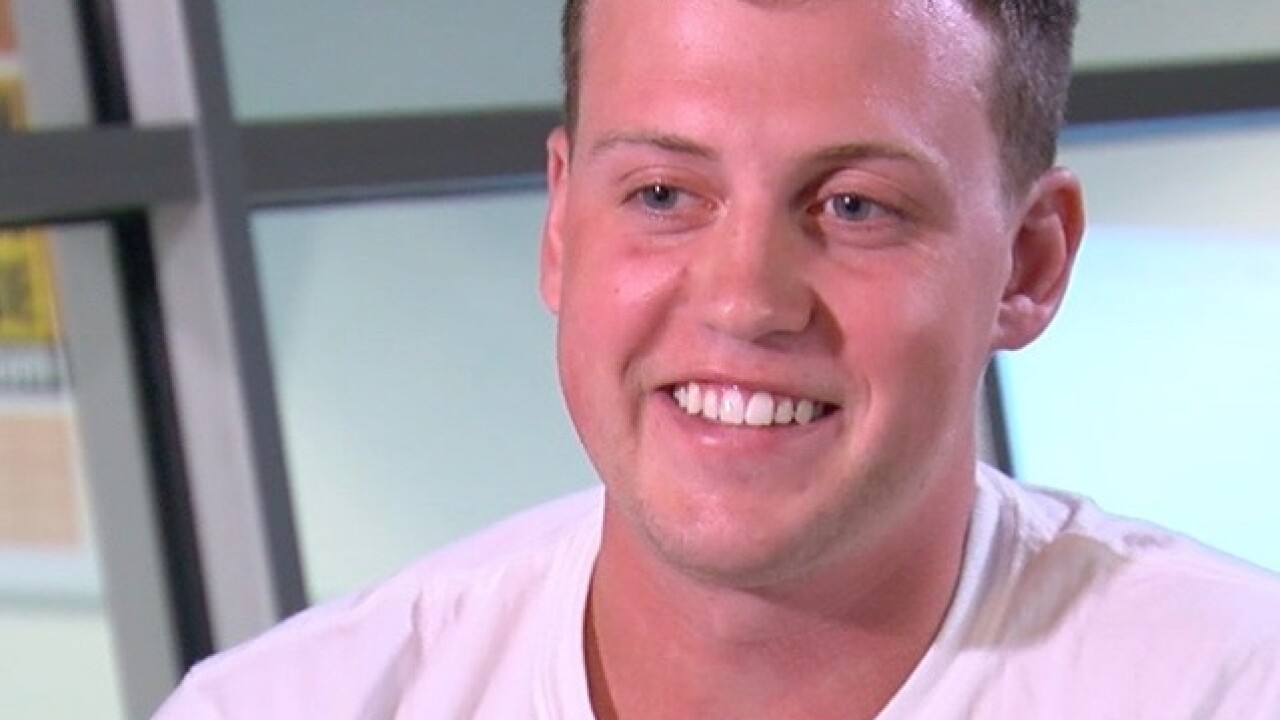 Copyright 2018 Scripps Media, Inc. All rights reserved. This material may not be published, broadcast, rewritten, or redistributed.
Ramsay Fulbright | WCPO
<p>Preston Kahn during an interview at WCPO.</p> 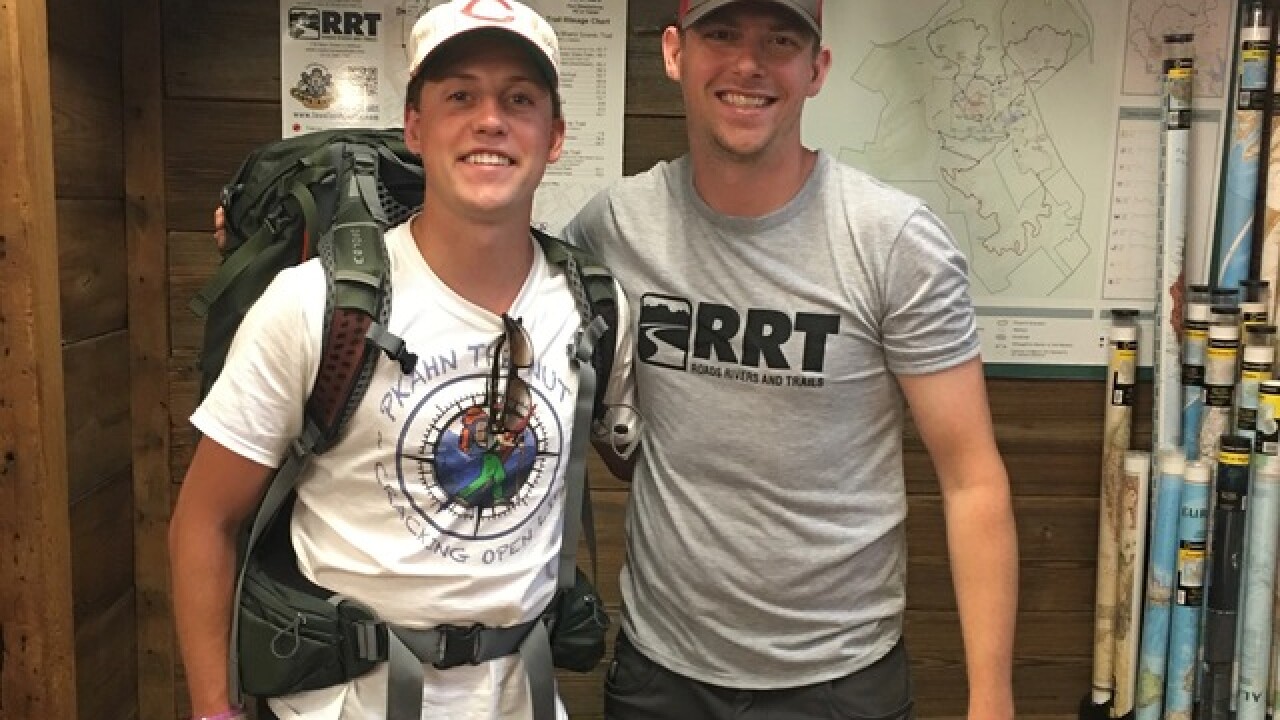 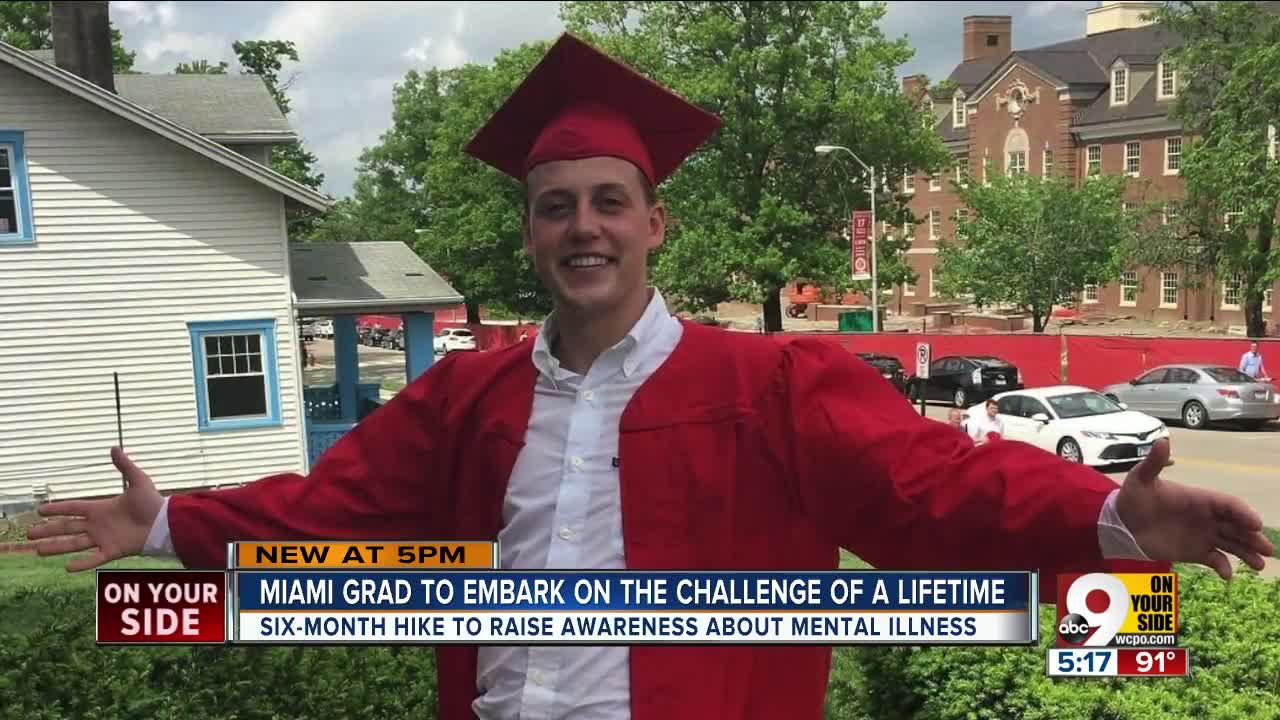 He's all smiles and confidence and positive energy, but he also has struggles that, until recently, he didn't talk about much.

"It stems back to freshman year in high school," said Kahn, who is 23 and just graduated from Miami University. "I've just dealt with the three-headed monster of anxiety, depression, ADHD, and they all kind of feed off of each other."

Kahn saw a therapist throughout high school but stopped during college. He thought he was doing fine until what he calls "a really dark moment."

"Last August, like two weeks before I went back to school, I attempted to take my own life," he said. "I was, you know, really close. But somehow, some way, it didn't happen, and I was able to kind of come back."

Kahn has come back so strong, in fact, that he's about to embark on the challenge of a lifetime: On July 8 he will start a 2,100-mile, six-month hike along the Appalachian Trail from Maine to Georgia.

An important part of Kahn's trip is to "re-center," he said, and reflect on what he wants to do next, but he also has turned his hike into a way to remove the stigma around mental illness and raise money for Grant Us Hope , a Cincinnati nonprofit working to reduce teen suicide in the region.

Kahn already has raised more than $10,000 through a GoFundMe campaign he launched in May. His goal is to help Grant Us Hope fund Hope Squads in local schools, where students will be trained to become the eyes and ears of their schools and connect troubled peers with the help they need.

The money will help support the launch of Hope Squads in 20 Greater Cincinnati schools during the coming school year , said Kerri Schuman, program manager for Grant Us Hope.

"What Preston's doing by sharing his story and being courageous enough to do that, he's really silencing the stigma, making himself vulnerable and showing people that it's OK," Schuman said. "Listening to him and hearing his story, I think he's going to give some kids the courage to do the same."

Kahn, whose nickname is "Pkahn the Nut" -- pronounced like pecan -- is calling his journey "Pkahn the Nut Cracking Open Life" and even has T-shirts with the slogan that he is selling to raise more money for Grant Us Hope.

His trip will cost about $6,000, he said, and he is paying for it with money he earned from a company that he and a friend started to sell shirts for Green Beer Day at Miami.

All the money raised through his GoFundMe campaign will go to Grant Us Hope, he said.

Kahn practically oozes confidence about what lies ahead. He talks about how he has been training and is in the best shape of his life.

He has been walking around carrying his backpack full of gear. He plans to post updates on Facebook and Instagram and is scheduled to meet college friends along the way who will hike with him for a week at a time.

Still, he knows it won't be easy. Only one of every five people who attempt what he is trying to do make it the whole way, he said, and others who completed the hike have told him to expect challenges.

"The people who have done it have just said, like, 'There's going to be a moment where you come face to face with the wall, and just know that a week from that it's going to be so much better,'" he said. "'You've just got to keep churning along.'"

It's a lot like the perspective that Kahn said he has gained about his depression and anxiety.

"You hear it, and it's so cliché, but suicide is such a permanent solution to a temporary problem," he said. "You can feel down and sad about what you're going through now, but that problem might not be there tomorrow. If you're gone, if you pass away, you can't fix that problem."

Clearly, Kahn is in a very different place than he was last August when he tried to end his own life.

He knows that nobody would assume from looking at him that he ever struggled with suicidal thoughts.

That's the scary thing about depression, he said. It's impossible to know what people are going through unless you ask them and they tell you.

"That's kind of my underlying mission in all this, is just, like, be open about what you're going through," he said. "Otherwise people can't help you, and you can't begin to help yourself."

That's what the Hope Squad program is all about, too.

About a week before Kahn left for Maine, Grant Us Hope hosted a pizza party send-off for him. Some students who have been picked to be Hope Squad members were there, along with other supporters of the group's work.

Schuman said the nonprofit is hoping that Hope Squad members will send Kahn messages of encouragement during his hike and that he will keep the nonprofit updated on his progress.

For Grant Us Hope, Kahn's efforts go beyond raising money that the organization needs to help reduce the number of teen suicides in the region, Schuman said. He also has expanded awareness of the group's work and has grown its community of supporters.

That's critically important, she said, because it will take all of us to tackle the problem of teen depression and suicide.

"This is not a problem at a certain high school. It's not a problem in a certain suburb. It's a community issue," Schuman said. "He's really helped us embrace that community and bring people together to support local teens and help silence the stigma."

You can read more about Preston Kahn's story and support his GoFundMe campaign online . His "Pkahn the Nut" t-shirts are available to purchase online , too. He also will be posting updates about his hike on a special Instagram account and a Facebook group that anyone can join.

More information about Grant Us Hope is available online, too.