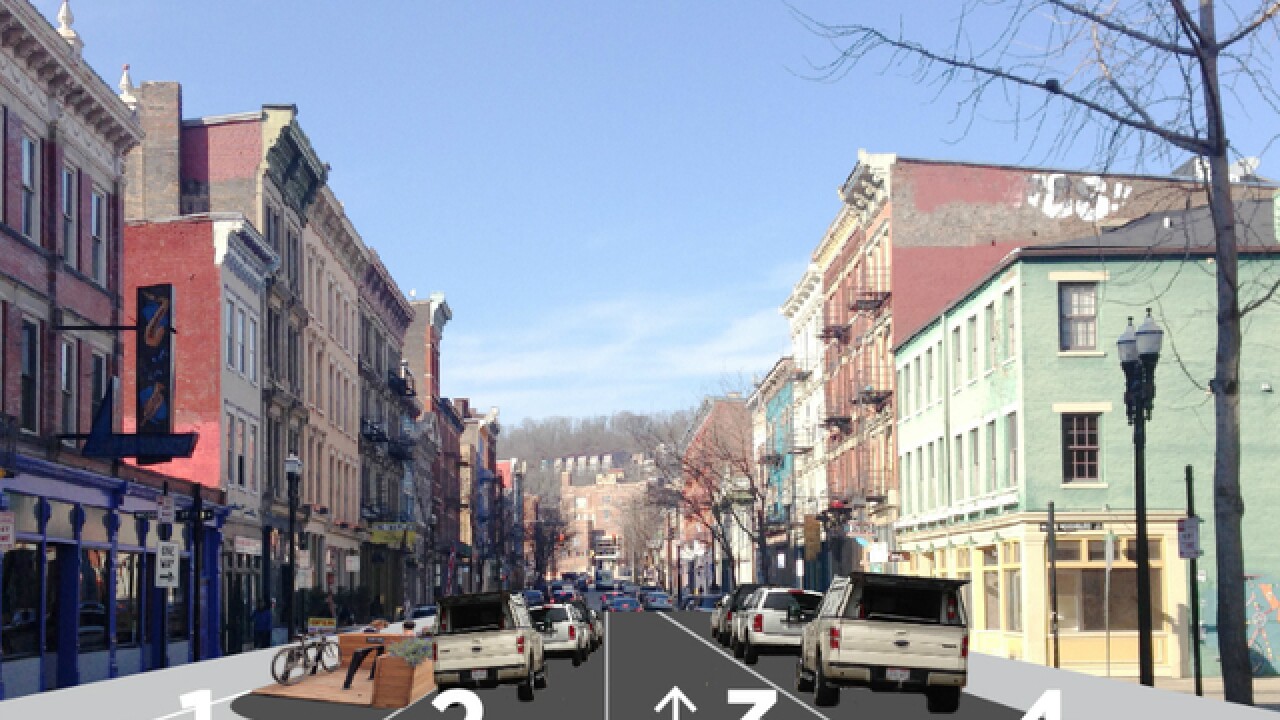 CINCINNATI -- What many consider to be the heart of Over-the-Rhine could be getting a serious facelift, but in the meantime it may get some minor changes that would push the entertainment district's walkability a step further.

The initial question for the Main Street Business Association, the neighborhood organization that requested the study, was whether the one-way corridor would benefit from being converted into a two-way configuration.

Ultimately, engineers and planners with the city’s Department of Transportation and Engineering found a two-way option "infeasible" -- at least for now. They instead called for a "more comprehensive" study of traffic trends in the area, after the upcoming, nearby Ziegler Garage is built and open to the public in 2018. They also noted the streetcar as a factor that could soon impact traffic volume in the entertainment district.

Funding for the project would come, in part, from a grant through the city's annual Neighborhood Business District Improvement Program.

In the meantime, project leaders presented two "near-term" options that they said would begin calming traffic in the area. One would offer more parking, the other would offer a growing trend among urban areas across the country: parklets.

Currently, Main Street is a one-way thoroughfare with two travel lanes and two parking lanes, one on each side, bookended by two sidewalks. That translates to about 40 feet in crossing distance for pedestrians.

Both near-term plans would reduce traffic to one lane in the northbound direction. One would mean increased, angled parking along the street’s western side, while the other would install bump-outs at crosswalks and intersections and convert some of the parking spaces into parking space-sized public green spaces, also called "parklets."

Across the river, the city of Covington launched its inaugural parklets program this spring.

For walkers, the parklets option would mean a 10-foot reduction in crossing distance.

Michael Moore, who heads the DOTE, said each configuration has its advantages and disadvantages.

"Both options would visually narrow the street, which typically results in decreased motor vehicle speeds," he said. "The parklet option would expand the social life of the street, creating more opportunities for outdoor dining, games, public art, etc."

The problem, though, Moore said, is that both options would eliminate a travel lane, and as a result motorists will have to expect increased travel times through the corridor. An added downside to the angled parking option, Moore said, is that it would require drivers to back out into a single travel lane when leaving, further adding to the potential for congestion.

But one-way to two-way conversions are gaining more traction among urban planners as ways to make streets safer and easier, particularly for non-motorists using the space. Coincidentally, one day after Cincinnati planners presented the Main Street options, national development advocacy group Strong Towns published a report detailing what two-way streets have to offer as far as traffic calming goes.

The report presents the notion that two-way streets are not just safer and easier to navigate, but are better for business, as well, citing a Washington Post story titled, "Why one-way streets are bad for everyone but speeding cars":

"Two-way streets offer more exposure for local businesses because cars driving in both directions pass by their storefronts. Two-way streets also slow the cars, meaning drivers and passengers have more time to notice local businesses out the window. Two-ways also encourage more foot traffic because they feel safer for pedestrians."

This was the mentality behind the MSBA's request that the city study a two-way configuration's potential along the corridor, according to DOTE Director Michael Moore.

"They believed two-way traffic would improve access to businesses on Main Street and spur business development," Moore said. Once it was determined two-way traffic wouldn't be immediately viable, the MSBA then requested other traffic-calming measures be explored to improve what Moore described as the "pedestrian experience" in the area.

Whether it's the right call for Main Street, though, remains to be seen. For now, planners are collecting feedback from neighborhood residents about which of the near-term options they prefer.