No. 5 Cincinnati Bearcats have found NKU's BB&T Arena to be a great home away from home 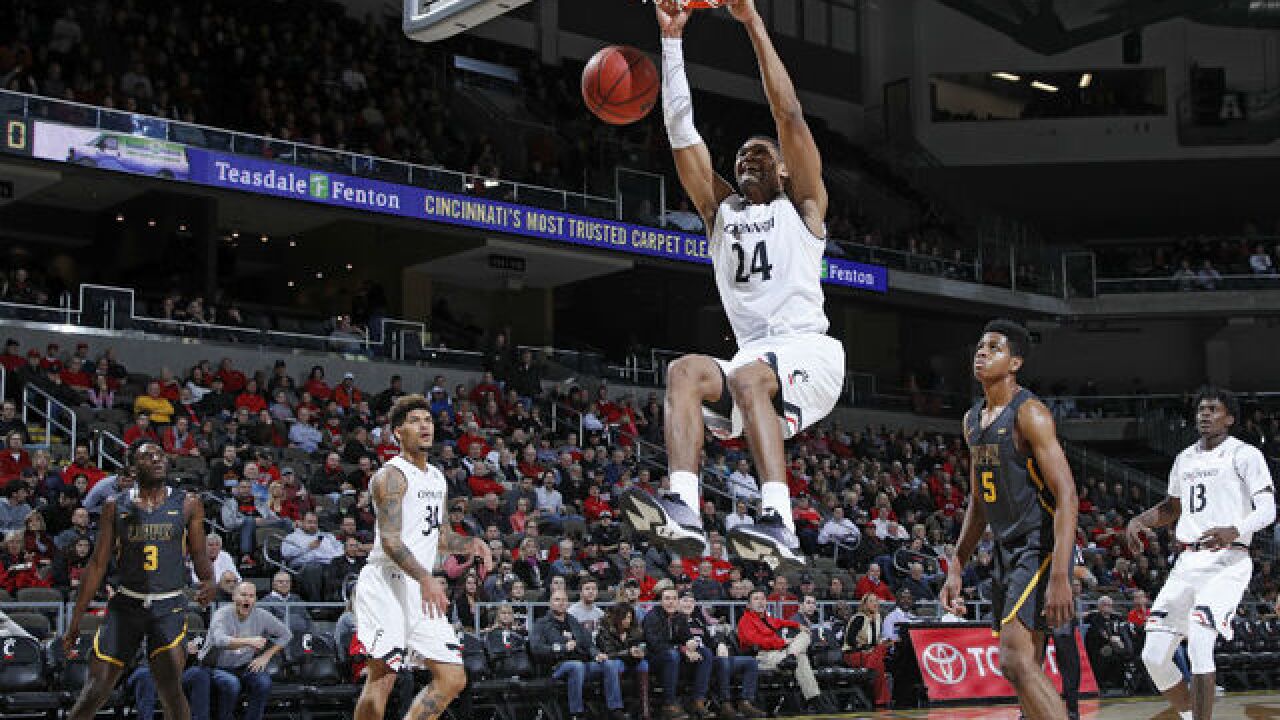 Image copyright 2017 Getty Images. All rights reserved. This material may not be published, broadcast, rewritten, or redistributed.
Joe Robbins | Getty Images
<p>Kyle Washington dunks the ball in the first half of a game against the Coppin State Eagles at BB&T Arena on Nov. 16, 2017 in Highland Heights, Ky. (Joe Robbins/Getty Images)</p>

HIGHLAND HEIGHTS, Ky. -- It takes a police escort just for the Cincinnati Bearcats to get to their home games this season -- at least during the week.

Major renovations at Fifth Third Arena have forced them onto the campus of Northern Kentucky University about 10 miles away, where they have to fight rush hour traffic and cross the Ohio River on an oft jam-packed bridge.

When the Bearcats arrive at their home away from home in BB&T Arena, they walk in to see NKU logos on the scoreboard and a big Norse presiding over the court, unless it happens to be a day the floor can be converted.

RELATED: UC point guards have stepped up this season.

Cincinnati’s operations and marketing staffs have worked to add some of their own touches around the facility on game days, but there’s only so much that can be done to disguise the fact this is another Division I team’s court.

In spite of all the black and gold surrounding them, the Bearcats have settled in nicely at their temporary home. They hope to continue a nation-leading 38-game home win streak as they head into the final homestand -- Sunday against Wichita State, Thursday against UConn and Feb. 25 against Tulsa before finishing the season on the road. They are 13-0 at home this season.

“It is different looking at the court, but I feel we just try to embrace it as our home, try not to think about it and try to think it's actually ours,” junior guard Jacob Evans said. “It took some getting used to, but I think we’re more comfortable with it now. I feel like our fans do a good job coming out and supporting us so it makes it a little easier for us.

"It's still basketball, no matter where you play, so we just have to keep taking care of business at NKU.”

Fifth Third Arena is expected to open in October after an $87 million renovation. UC, in the meantime, is one of four Division I basketball teams to be displaced this season.

UC is paying about $650,000 to play 17 games at BB&T, as well as a $100,000 fee to branding company Learfield Communications to display UC signage throughout the arena.

It costs $2,000 every time NKU converts to UC’s floor, which depends on the Norse’s schedules. The Bearcats’ home floor sits in storage at the facility when not in use, and it takes about three hours to convert, according to Associate Athletic Director for Facilities and Operations Andre Seoldo.

It’s been a smooth transition on the operations end, despite the logistical issues, Seoldo said.

“We are well into our groove now,” he said. “The first couple games there was a learning curve to see how we wanted to situate ourselves. We had countless meetings with people over there, and after the first three-to-five games it was more like clockwork.”

Among the biggest the changes made for UC game days, the Bearcats operations staff had to add seven tables courtside to expand NKU’s 30 feet of digital scoring space to the 100 feet Cincinnati is accustom to having.

UC brings its own bench chairs and uses NKU’s courtside seats, but adds slipcovers to give them a Bearcat look. Cincinnati also installed a digital display to the neck of the basket, which NKU now utilizes, too, and sponsorship signs on the bottom of the basket had to be covered and redone to fit UC’s sponsors.

Seoldo said marketing did a lot of the branding around the concourse and in the pathways where the team runs out of the tunnel from the locker room.

“Their venue people are easy to work with and helped us out when they could,” Seoldo said. “We’ve developed a pretty good relationship with them, so that sure makes life easier.”

Playing at BB&T saves UC some trouble in that the school is using the arena’s contracted ushers, ticket-takers, bag-checkers and concessions workers. It’s a few less things for Seoldo to worry about, and he has heard no complaints from fans regarding the game-day experience.

Of course, it’s a different setup for fans, too. The 9,400-seat BB&T is smaller and configured differently than Fifth Third Arena, where the seats are close to the court and 13,176 fans can attend, but $5 parking has been a plus.

“It’s a little different, I’m not going to lie,” said 50-year-old Cherry Grove resident Greg Hoodin, who has been to six UC home games this season. “You walk in and see the same people you see at the Shoe (Fifth Third Arena at Myrl H. Shoemaker Center), so when the band starts playing and cheerleaders come out and the Bearcat starts running around with the flag, it feels more like a home game.

“But, at the Shoe, there are two student sections on each end and you get the crazy at both ends. There is just one student section at BB&T, so it’s never going to be as loud and it’s just not the same. But it’s a nice arena. The views are great. I’ve been on the floor, upstairs, downstairs, and the facility is really nice.”

Hoodin also misses having bars and restaurants nearby to frequent before or after games at Fifth Third. There is a shuttle from Barleycorn’s in Cold Spring to BB&T Arena, but it’s not the same as the experience around UC's campus, Hoodin said.

Playing at NKU doesn’t throw off the game-day schedule too much for the team.

The Bearcats have their shootaround on campus, then enjoy a pre-game meal and head to BB&T for warmups about two hours before tipoff. The drive takes about 30 minutes. NKU is allowed to practice up to 90 minutes before tipoff, which is also when the gates open, so sometimes UC has to wait in the locker room a little while before heading out to the floor, but the players don’t seem to mind.

“It was weird the first couple times being there, but we’ve gotten used to it,” said junior point guard Cane Broome, who watched from the sidelines last year during games at Fifth Third Arena after transferring from Sacred Heart. “A court is just a court, so it's not that big a deal, but I'm looking forward to getting back here on campus where there is no question we have home-court advantage.”