Justin Jenifer, Cane Broome have stepped up for No. 5 Cincinnati Bearcats to fill Troy Caupain void 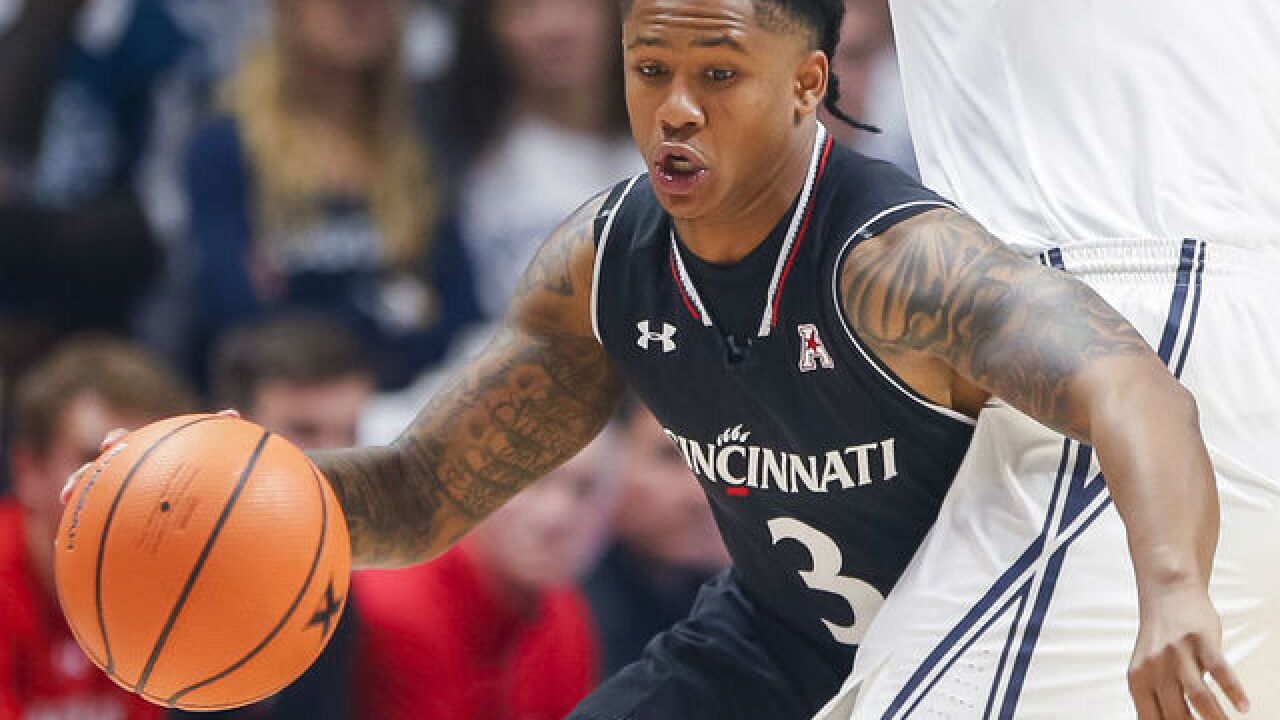 Image copyright 2017 Getty Images. All rights reserved. This material may not be published, broadcast, rewritten, or redistributed.
Michael Hickey | Getty Images
<p>Justin Jenifer #3 of the Cincinnati Bearcats dribbles around Kerem Kanter #11 of the Xavier Musketeers at Cintas Center on December 2, 2017 in Cincinnati, Ohio. (Photo by Michael Hickey/Getty Images)</p>

CINCINNATI -- It’s taken two players for the Cincinnati Bearcats to replace Troy Caupain at point guard, but Mick Cronin hasn't looked for one man to take over the position.

Starter Justin Jenifer shares equal playing time with fellow junior Cane Broome, who sat out last season after transferring from Sacred Heart, and Cronin likes what both bring to the floor.

Jenifer is a pass-first player averaging 5.3 points and 2.6 assists per game, while Broome is more of a scorer with 7.7 points and 3.0 assists per game, but the duo has been key on both sides of the ball, helping UC (23-2) to a No. 5 ranking in the Associated Press poll this week.

The Bearcats play at Houston on Thursday, looking to remain perfect in American Athletic Conference play before heading home for a three-game stretch.

“They are doing great,” Cronin said. “I think what people don't realize is we ask them to do two things -- take care of the ball and pressure the ball. They expend a lot of energy pressuring the ball defensively for us, and that has led to a lot of our defensive success because that causes a lot of disruption. Teams can't just flow into their offense.

"Picking up 94 feet and working as hard as they are working on guarding the ball in the backcourt takes a lot of energy. The other end is taking the ball. Justin is great at it. Cane is a little more of a scorer, but together they've been getting it done for us.”

Cronin originally anticipated the two playing together more, but with Broome checking in at 6-foot, 165 pounds and Jenifer listed at 5-foot-10, 175 pounds, their size makes it hard to do so.

Cronin instead rotates the two to keep both fresh, then goes with the one who fits best in the flow of the game to start the second half.

It might seem like rotating players with such different strengths would disrupt Cincinnati’s offense, but that hasn’t been the case. Shooting guard Jacob Evans, who played point in high school, said it’s a smooth transition from one to the other.

“They are that dynamic duo point guard,” Evans said. “They are both these two Energizer bunnies, but they play different.

"It's crazy they are both smaller guards but have a completely different type of game. Justin slashes. I like to say they both slice and dice, but Cane's more versatile finishing at the basket and he can jump out of this world, he's more athletic. Justin is quick, in and out of his moves, and he sees the floor like no other. His passes are incredible, and they are both hand-in-hand on defense pressuring the ball. I love playing with them.”

Off the court, the two point guards have become close while rooming together in an apartment-style dorm. They enjoy watching "CSI," "Law & Order" and NBA games on TV together, and both complimented the other’s cooking abilities. Broome says Jenifer is the better cook but Jenifer likes when his roomie makes breakfast, especially Broome’s special cinnamon rolls baked in a waffle maker.

It’s a friendly competition between them on the court.

“It's cool because there's a little battle between us being point guards and both in the same class, so every day we compete when we're out here, regardless of us being friends, and make each other better,” Jenifer said.

Broome thinks their styles complement each other well.

“We both have different strengths so it’s not like one is better than the other," Broome said. "I bring more of a scoring mentality to the position. He's more of a pass-first guy. We both pass and we both shoot, but our games are different. He controls the game more, and I have a faster pace and try to get it going more.”

Jenifer spent the last two seasons learning from Caupain, playing in 35 games last year as a reserve and averaging 2.8 points, 1.9 assists and 1.0 rebounds in 12.7 minutes per game and posting similar numbers as a freshman.

Broome watched from the sidelines last year because of transfer rules but had a big adjustment to make this season after playing a much larger role at Sacred Heart. The 2015-16 Northeast Conference Player of the Year ranked eighth in the nation in scoring at 23.1 points per game his sophomore season before transferring.

The move was well worth it to Broome, though. He and the Bearcats are on their way to the program’s eighth straight NCAA appearance, where they are currently projected to be a No. 2 seed.

Cronin has seen big strides from both Broome and Jenifer since the beginning of the season and expects them to both play significant roles as the season progresses.

"I think they've also come to understand that, hey, you're going to get a lot of open shots on this team, and … having played with these guys they kind of know if the ball comes inside and back out, they are probably going to be wide open, so they really need to work on those shots.”

Even though their scoring statistics are not gaudy like Caupain’s double-figure averages, Cronin said the team’s shooting percentage has remained high (45.5 percent, compared to 45.8 percent last year) because of good decision-making at the point guard position.

Jenifer credits the other players for making it so easy for him and Broome to run the offense.

“Our chemistry is just wonderful,” he said. “Since I've been here I haven't experienced this. This year has been so much fun, just being around the guys on and off the court. Just everything is flowing together on the court and it's like we're just jelling together. Hopefully we can keep it going and Cane and I can help lead the way.”