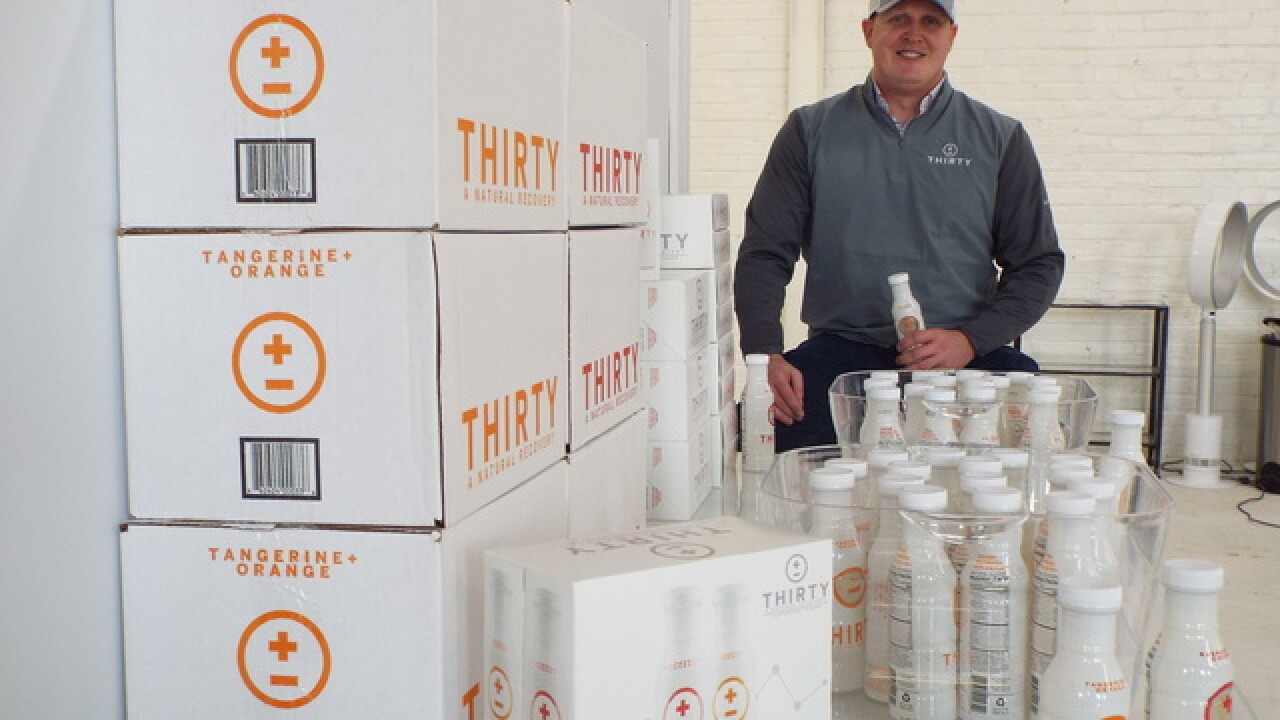 Copyright 2017 Scripps Media, Inc. All rights reserved. This material may not be published, broadcast, rewritten, or redistributed.
Kevin Eigelbach | WCPO contributor
<p>Patrick McGinnis, creator of Thirty, poses with some of his product inside the Queensgate warehouse that serves as his office.</p>

CINCINNATI -- Some startups want to make you think -- about what you wear, about where to eat, about what to read.

Here's one that wants to make you drink.

It's called Recov Beverages, and it's the brainchild of Northern Kentucky University grad Patrick McGinnis. The company just launched its first product, Thirty, an after-workout drink for the health-conscious.

Thirty has just 30 calories, McGinnis said, and it's made from all-natural ingredients such as stevia, monk fruit juice, granulated sugar and others. It has three times the electrolytes in each serving as the average sports drink, he said.

The drink already has a distributor, Queensgate-based Heidelberg Distributing, which serves 26,000 retailers in Ohio and Kentucky.

"A big part of our industry is introducing new items to the consumer," said Heidelberg Vice President of Sales & Marketing Kevin McNamara. "When I had the opportunity to sit down with Patrick and learn what his product was all about, I felt we could help spread his story to our customers and our consumers."

Already having a distributor is key in the drink market, McGinnis said, because the first thing retailers ask him when he asks them to stock Thirty is, "Who's your distributor?"

After graduation, McGinnis worked in the local beverage industry for about 12 years, including a stint at Heidelberg, where he met CEO Vail Miller Jr. He conceived of Thirty, he said, because he saw how well low-calorie beers were selling, and how few options there were in the after-workout drink market.

Last summer, he worked with the local office of Givaudan Flavors Corp. to create Thirty. That involved testing 400 versions of the drink, narrowing them down to less than 10 and narrowing them down again to two flavors: raspberry/cherry and tangerine/orange.

He wanted the drink to have zero calories, he said, but it turns out that the electrolytes the body needs to replenish itself have calories. That meant that the fewest calories the drink could have was 30 -- hence the name.

McGinnis chose a plain, white bottle for Thirty, bearing the logo of a circle around a plus and a minus symbol (more electrolytes and fewer calories). Twenty-four vendors, most of them local, make the drink and its packaging, he said, including manufacturer Dixie Dew Products in Erlanger, Kentucky.

Does he have investors?

So far, he and minority partner Sean Herron have bootstrapped the business, investing about $100,000 of their own funds. It's been nice, McGinnis said, not having an outside group of investors breathing down their necks.

About 1,000 cases have been sold through Amazon.com and another 1,000 through local outlets since Thirty became available about a month ago, McGinnis said. The drink is available at 12 locations, mostly in downtown Cincinnati, including Center Hub Deli & Eatery.

McGinnis hopes to sell 40,000 cases in Ohio this year. To reach that goal, he plans to hire some sales reps in the next few weeks.

He'll also be visiting chain stores like Kroger Co., hoping to persuade them to stock Thirty. And, he plans to promote it at such events as 5K runs and Cincy Beerfest.

Forbes magazine estimates that sports drinks account for about 4.6 percent of the U.S. liquid-refreshment beverage market. The segment was expected to grow because people are drinking fewer carbonated soft drinks.

What's been the biggest challenge?

Making people understand that it's not just another sports drink, but a healthful one.

Now 32, McGinnis has always wanted to own his own business.

"I knew this would happen," he said. "It was just a matter of what and when."