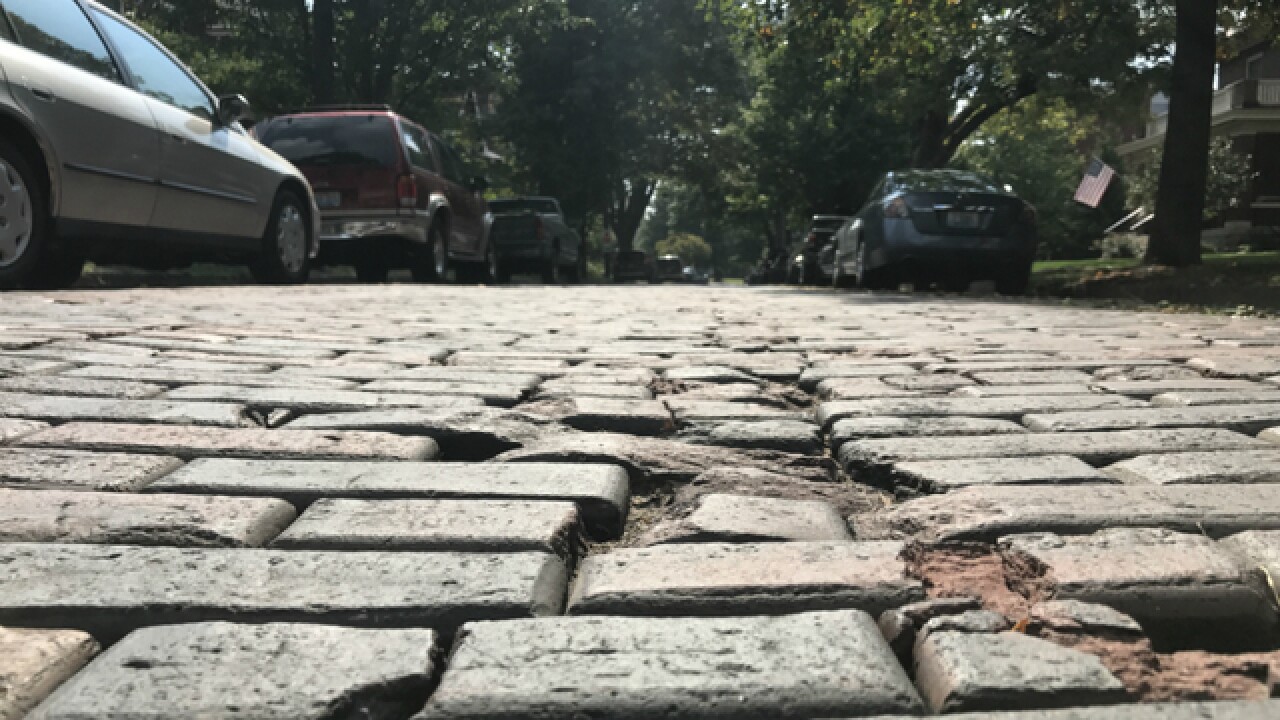 Copyright 2017 Scripps Media, Inc. All rights reserved. This material may not be published, broadcast, rewritten, or redistributed.
Pat LaFleur | WCPO
<p>Nelson Place in Newport is the only brick street in the city with all of its original bricks, originally laid in the early 1900s. (Pat LaFleur/WCPO)</p>

NEWPORT, Ky. -- Weingartner Place in the heart of Newport's urban core didn't always look like it does today.

For years, the small strip nestled on the edge of the city's East Row historic district looked run down and in serious need of repair. The surface was uneven, bricks were missing and other gaps had been filled with concrete, only adding to the road's uneven surface.

"It really looked bad," said Tom Guidugli Sr., who heads up Neighborhood Foundations -- formerly known as the Housing Authority of Newport. "I said to myself, 'I'm going to get that fixed.'"

Guidugli, who also served as mayor of Newport in the 2000s, received in June one of 2017's River Cities Excellence in Preservation Awards -- handed out annually by the Kentucky Heritage Council -- for his work on Weingartner Place's brick work.

He's not done, either. Neighborhood Foundations is in the process of restoring more brick and cobblestone roads near the East Row, as well as across town in the city's West End.

Guidugli said he was inspired to fix the small stretch of brick -- which is so small some could mistake it for an alleyway -- after the housing authority acquired 721 Weingartner. That property had been sitting vacant for roughly five years and had been dumped by a developer who didn't have the resources for what was needed to rehab it.

"After we became a developer," which prompted the housing authority rebranding to Neighborhood Foundations, "we realized we could do some community development work, as well," he said.

He could see his vision for Weingartner rehab, and it didn't match what he saw on the street leading up to the property.

It might seem like a minor road project, but the truth is these brick streets and alleyways wind all throughout Newport -- as well as neighboring cities like Bellevue, Dayton, Covington and Cincinnati across the river -- often hidden in plain sight.

A large portion of Newport's alleyways are still paved with brick, along with multiple streets -- especially in the East Row historic district.

They're so important, Guidugli and others agree, because they represent these cities' history and encourage community.

"When possible, we preserve and restore brick streets along with the surrounding neighborhood. We believe that preservation establishes stability, comfort and a sense of community," said Thomas Fromme, Newport's city manager.

"Since Newport is an older city, along with the character and charm that comes with it, we believe it's critical to embrace that history," he said.

Take Nelson Place, just a few blocks from Weingartner in the East Row. It's the only one of Newport's brick streets and alleys to have maintained almost all of its original bricks, laid in the early 1900s. That's according to Scott Clark, Fromme's historical preservation officer.

Clark said it is so important to restore and preserve these alleys and streets that it is codified into city law in an ordinance requiring brick streets and alleyways be restored, rather than paved over with asphalt or concrete.

It's a measure passed under Guidugli's stint as mayor, and it makes Newport unique among other historic cities in the commonwealth.

But it comes with challenges.

Guidugli said most of the gaps on Weingartner were a result of utility work being done on the street over the years.

"They don't necessarily think about what they're digging into," he said. "They're there to restore the service that's interrupted as quickly as possible. People want their power back or their sewer fixed quickly."

Guidugli said it's also hard to keep up with spots where utilities or public works digs through the brick and replaces it with concrete.

"You can't be everywhere all at once," he said.

Another challenge Clark pointed to is that these roads were not created to accommodate the sort of vehicles and equipment that traverse them now.

"These were paved to take horse-and-wagon traffic or, at most, Model-T traffic," he said. "Not the sort of modern equipment we see today."

He pointed specifically to the many garbage trucks that sweep up and down alleyways collecting trash. A large portion of Newport's trash collection occurs in brick alleyways.

These challenges require a large amount of collaboration -- among utility providers, city services and city residents, both Guidugli and Clark agree.

"You have to have pride in your community," Guidugli echoed. "This relies on that."