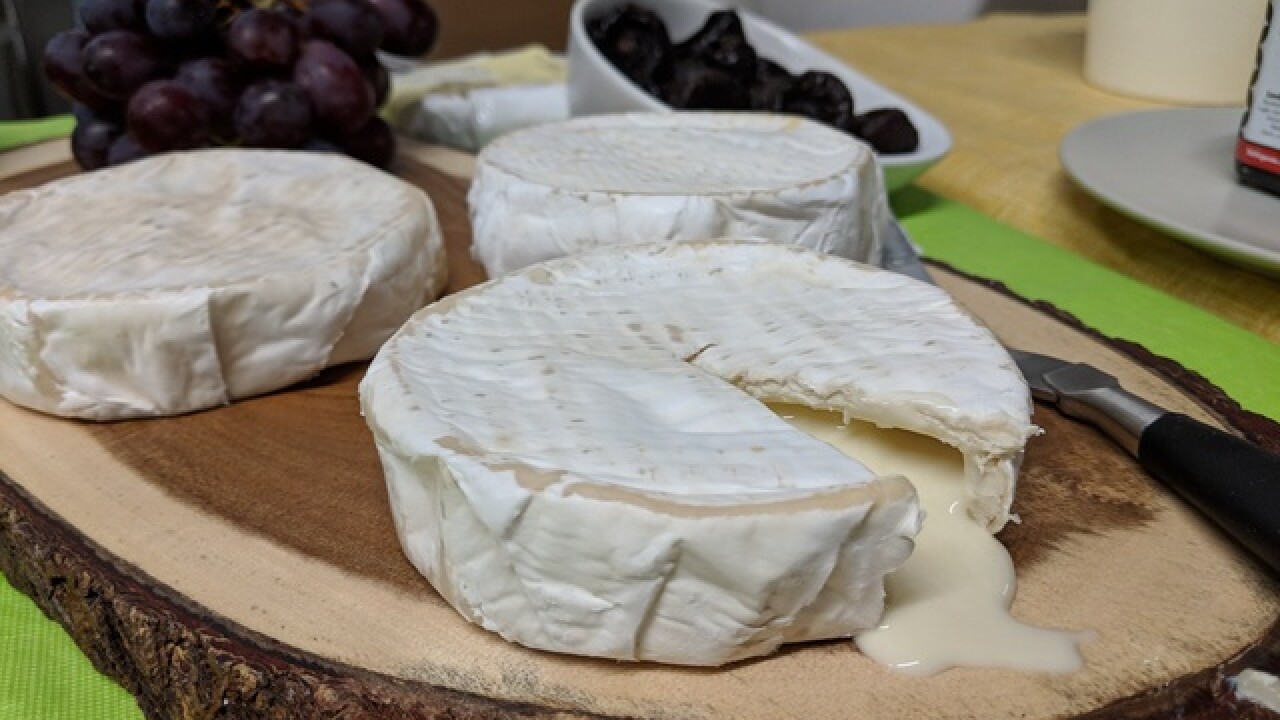 Copyright 2018 Scripps Media, Inc. All rights reserved. This material may not be published, broadcast, rewritten, or redistributed.
Grace S. Yek | WCPO contributor
<p>Sharon Creek is a Brie-style cheese made by My Artisano Foods.</p>

The roughly 2,000-square-foot facility is part of a larger space previously occupied by Rivertown Brewery.

"(This new location) has more production and storage capacity," owner and cheesemaker Eduardo Rodriguez said. Since he launched My Artisano Foods in January 2013, the company has grown a steady 10 percent every year. Rodriguez now makes 250 to 300 pounds of cheese a week.

Rodriguez got the U.S. Department of Agriculture's approval to produce cheese in the new space about a month ago. Cheesemaking begins in the process room, a sterile environment where milk is curdled and injected with fermentation cultures. Downstream from the process room, a cold aging room holds cheeses anywhere from 21 to 40 days. Yet another cold room stores cheeses that are packed and ready for sale.

A Venezuelan native, Rodriguez specializes in fresh and soft-ripened cheeses. He left his corporate job at Procter & Gamble in 2012 to return to cheesemaking, a craft he first learned while working at a farm in Zaraza, Venezuela.

My Artisano Foods offers year-round and seasonal cheeses. Sharon Creek is a popular year-round cheese, named after the creek of the same name in Sharonville. The cheese has a bloomy rind reminiscent of brie, an edible crust formed by the cheese culture with notes of cream, earth and mushroom.

The seasonal cheeses span roughly a half-dozen varieties. For spring, Rodriguez offers farmer's cheese and goat cheese -- both in the style of farm-fresh cheese, soft and with a creamy cultured note.

Of the cheeses he makes, the hand-stretched and Guayanes cheeses are the most traditional to Venezuela.

"Both are pasta filata, which are in the mozzarella style," he said.

Key to Rodriguez's success is his genuine love for cheesemaking, which is both art and science. Beyond strict controls of time, temperature and other data points, it's as much about "reading" the microbes to create the best flavors from the live cultures -- a process that cannot be rushed.

His exacting standards for local, quality ingredients -- cow milk from Swallow Hill Jersey Dairy in Jamestown, Ohio, and goat milk from D&L Meadows in Williamsburg -- also come through in the product. Those same standards extend to the other ingredients such as cultures and probiotics, rennet (an enzyme that forms cheese curds) and sea salt.

"Venezuelan cheeses are fresh cheeses, but it has that tang, acidity and citrusy flavor in the back because they are fermented," he said. "That's because we add beneficial bacteria -- probiotic bacteria -- which, in the end, is also good for the consumer."

My Artisano Foods appeals to the most discerning of customers: restaurant chefs. Nathan Mantia, the executive chef at Tela Bar + Kitchen, serves the cheeses on the charcuterie and cheese plate.

"I know he's sourcing the best milk ... he knows how to make cheese the right way," Mantia said. "The taste, the quality, the freshness, the variety -- our customers love it."

Rodriguez also has found a following with other restaurants including Orchids at Palm Court, Maribelle's Eat + Drink, Panino and Bouquet.

Alice Chalmers, the owner of Ohio Valley Food Connection, a company that connects area farmers and producers to the local marketplace, said Rodriguez has a unique product line.

"He's the only one I know of that makes brie cheese. A lot of people are happily surprised to be able to source locally for these cheeses," she added.

Although Rodriguez is largely a wholesaler, he hasn't forgotten about his retail customers. He will open the showroom to the public for a few hours on Fridays and Saturdays.

"We will also have a cheeseboard so that the customers can sample a variety of different cheeses," he said.

My Artisano Foods has artisan-minded neighbors -- La Terza Coffee Roasterie and Fab Ferments -- just one building over. The proximity of these companies is fertile ground for collaboration. Plans are already underway to explore coffee-cheese pairings with La Terza and to use cultured vegetable liquids from Fab Ferments to make washed cheese.

With the larger space, Rodriguez is also looking to expand on the educational front.

"I'd like to offer cheese culture education through our own classes and in collaboration with other food makers here in Lockland," he said.

My Artisano Foods also can be found at local stores, farmers markets and restaurants. Click here for more information: http://myartisanofoods.com/

Grace Yek writes about food for WCPO. She is a certified chef-de-cuisine with the American Culinary Federation, and a former chemical engineer. Questions or comments? Connect with her on Twitter.